There are 7 million advertisers on Facebook, and if you advertise online, you’re likely one of them. Nearly 60% of all digital ad dollars go to the Google/Facebook pair.

At this point, you may also be a user of AMP — the open-source framework started by Google to speed the lagging mobile web. So far, there are over 31,000,000 domains publishing AMP documents on the web.

What’s less likely, however, is that you’re using the two for conversion, together. And there’s a good reason why: Facebook, with its Instant Articles, once appeared a rival to AMP. Years later, though, they’re the perfect combination for building an optimized post-click landing page.

When AMP showed up, it was every bit the bare-bones framework it claimed to be. Of course, it had to be to trim the bloated mobile web.

But for speed, AMP sacrificed versatility. With a lightweight framework that restricted the use of JavaScript, it was only capable of supporting static content at first.

It became a favorite of publishers, who benefited not only from the speed increase by adopting the framework, but a bump to the top carousel on search engine results pages. Slate, Gizmodo, and the Washington Post were among the first to see big improvements in KPIs that were later reported by DoubleClick: 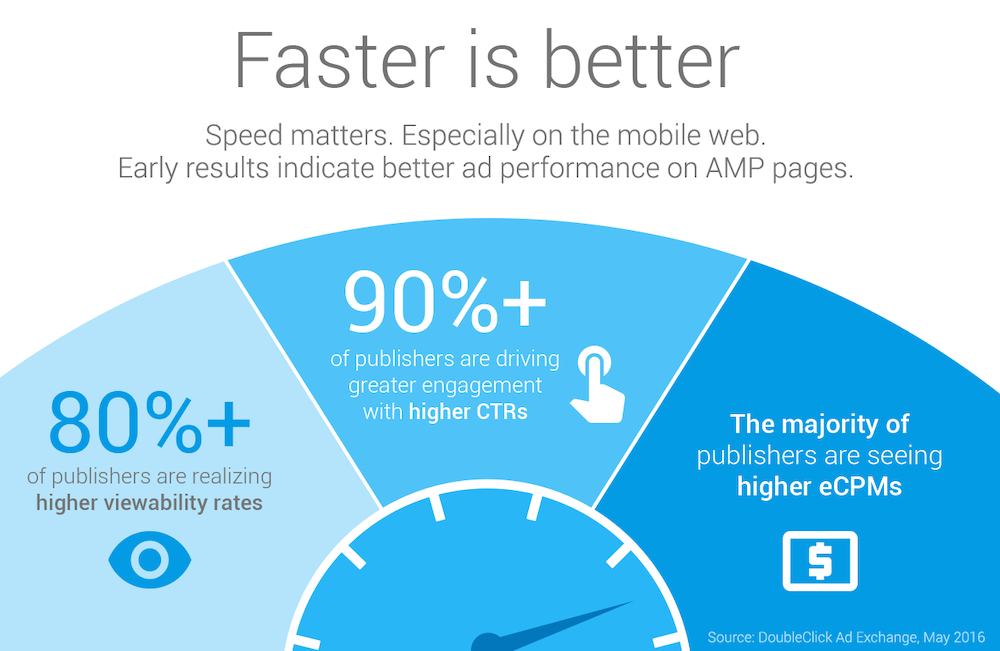 But AMP is open source, which, according to a blog post, has meant big things for its development in just a few years:

As the AMP project has grown thanks to the collaboration of the open-source community, new components have been built that allow companies to do design customization and create interactivity. Today, most interactive experiences are supported:

As the framework’s versatility grew, AMP usage evolved. eBay was the first major non-news site to announce the AMPing of 8 million pages. Then, some conversion-related breakthroughs:

Today, over 60% of clicks from search engines to AMP pages are to non-news sites. From post-click landing pages to websites, and beyond to progressive web apps, AMP is being used to build it all.

So much has changed, in fact, that AMP isn’t even “accelerated mobile pages” anymore. It’s just “AMP”: mobile-first, not mobile-only. And at that intersection is where it meets Facebook.

Facebook has seen many changes since its inception in 2004. Perhaps the most significant was born from the mobile revolution. As the years went on, more users chose mobile, and they were spending time in a select few apps. One of them was Facebook.

This led to many mobile-first updates, like Instant Articles, which didn’t grow as planned. Among others were formats like Collection and Lead Ads, Stories, Instant Experience, and additions to objectives, updates to pages. There was also a major change to the way Facebook’s algorithm worked, writes the team in a former news release:

With this update, we’ll soon take into account the estimated load time of a webpage that someone clicks to from any link in News Feed on the mobile app. Factors such as the person’s current network connection and the general speed of the corresponding webpage will be considered. If signals indicate the webpage will load quickly, the link to that webpage might appear higher in your feed.

These changes have paid off for the network. As of January of 2019, 96% of people accessed Facebook via smartphone, and 91% of Facebook’s ad revenue comes from mobile.

For advertisers, this parallel to AMP’s original mission to improve mobile experience (specifically through speed) means only one thing: AMP and Facebook belong together.

Facebook advertisers pour billions into the company every year. Yet, they spend this on only one half of the ad campaign: the pre-click experience. For the most part, the other half is neglected.

The pre- and post-click landing page

What makes Facebook and AMP a particular powerful duo is their ownership of their respective portion of the ad campaign. Facebook owns all things mobile advertising in the pre-click stage: outrageously powerful targeting, engaging formats, optimization tools, and more.

AMP, on the other end, owns the post-click landing page on the landing page and beyond: instant load speed, engaging media, lead capture, payment processing, etc.

Together, they provide a powerfully balanced ad campaign, with an emphasis on speed. Facebook’s targeting allows advertisers to get granular with their messaging to specific target segments, and after the click, a customized AMP page allows for instant transfer to the post-click, at which point dozens of components contribute to the conversion. And conversion optimization is quickly becoming a strength of the AMP framework.

Consider a study by Forrester Research, involving 4 major AMP users, which found that a site implementing AMP could expect:

Based on these results, Forrester built a model to predict the return from implementing AMP over a period of three years. Using that model, a website with 4 million monthly visits and a 10% profit margin would expect to recuperate the costs of implementing AMP and generate positive gains in 6 months or less:

Specifically, Forrester’s model found that this hypothetical AMP’d site with 4 million monthly visitors could expect to generate upwards of $1,005,447 over three years, from an investment of $210,827, producing an ROI of 377%:

We know Facebook is the king of targeting. And it’s clear that AMP can generate conversions. So what are some tips for using them together?

In a help article from Facebook, the social network recommends some tactics for improving mobile ad performance. Here are a few, combined with our own recommendations for the pre- and post-click landing page: 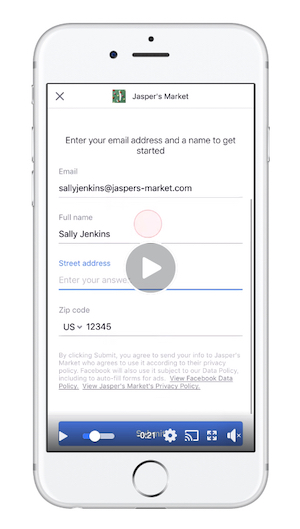 While there are some benefits to lead ads, the major problem is branding and customization. Without a dedicated post-click landing page, you’re constrained to Facebook’s design capabilities. What’s more, the chance to build brand equity, or to immediately nurture the lead deeper into the funnel, are lost if they remain on Facebook. Not to mention that, while Lead Ads load quickly, AMP pages load instantly. So when it comes to speed, the two are a wash.

I’ve seen people optimise their ads endlessly, but continue to send them to a boring, unfocused landing page - I even audited a charity whose ads were being run by an agency doing this, they were getting nice low numbers for their reports, and then blaming the lack on conversions on the charity’s follow up team.

Say it with us: Every promotion needs its own page. And more specifically, every audience should have its own page. When you leverage Facebook’s powerful targeting capabilities, optimize your ads until they’re perfectly segmented, but you drive those ads to a generic landing page, you waste your ad spend.

According to Jamie, this technique is way underused. “Conversion ads are really powerful, but people often stick with traffic ads, focusing on Click-through-rates rather than opt-ins or sales.” For those aiming to drive action beyond the click in the bottom of the funnel, optimizing for conversions is a powerful option.

At the intersection of Facebook and AMP is speed. Benefit from a boost by Facebook for your AMP adoption, and drive your users to your post-click landing page faster than ever before. Remember, just a 3 second load time will deter 40% of internet users from waiting for your page.

Learn more about how to use AMP with Facebook, and other platforms, with the help of AMP integration from Instapage.