Limited No More: 10 Updates to the AMP Format Digital Marketers Have to See

When AMP launched years ago, it was intending to speed the mobile web by restricting the use of certain page elements. Today, though, between workarounds and new developments, it can support dynamic content and even entire websites.

Still, the misconception remains that it’s only effective for static content. And this isn’t the only misconception. Today, we set the record straight about key components of the AMP format and how they’ve evolved.

How the AMP format has changed

1. AMP contributors are growing in number and variety

AMP started as a small, Google-backed project with only two contributors. By 2018, 700 people had contributed to the project. A year later, that number had increased to 1,000 contributors from other sites like Twitter, Yahoo, eBay, and Pinterest. Only 22% of the contributors were from Google:

2. Google has given up control

Since Google launched AMP, it’s been open-source, with major decisions about its future left to Matt Ubl, AMP project lead.

However, projects like AMP impact the entire web: businesses, people, jobs, information, and more. And that’s why Ubl and his team planned to relinquish control to a governing body representative of the community that helped to build it.

Recently, the team followed through with that plan, by putting a “consensus-seeking governance model” in place. Says Ubl:

When choosing a governance model (a system that describes how decisions are made) for AMP, we initially focused on agility. AMP has always been powered by the voices and feedback of the developers and organizations that use it. However, governance was centered around the tech lead (which is me, the author of this post), who ultimately decided what got executed and how.

While this works great for smaller projects, we’ve found that it doesn’t scale to the size of the AMP Project today. Instead, we want to move to a model that explicitly gives a voice to all constituents of the community, including those who cannot contribute code themselves, such as end-users. The change we are proposing is based on months of research, through which we’ve decided to follow the lead of the Node.js project and move to a consensus-seeking governance model.

Coming to this decision involved consideration of the goals they wanted to achieve:

How exactly will the new changes impact the AMP format?

Originally, AMP’s restricted coding language made it hard for developers to do much more than improve the load time of static pages. Now, though, there have been many developments to the framework which give users the ability to create versatile pages capable of doing much more than share news.

Today, AMP can be used across pages and verticals. It can be used to create product pages and category pages. It can form checkout flows and take payments. It can personalize to a specific segment, and even serve dynamic content. Here’s an example of a stunning AMP product category page from Myntra: 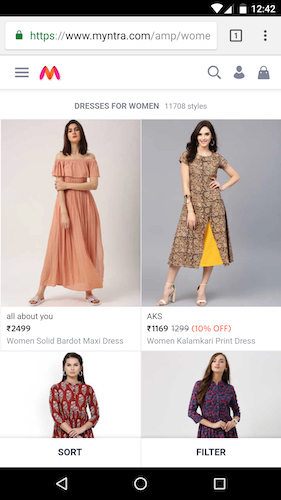 These capabilities and more make it an appealing choice for all businesses, from news to ecommerce. And that’s why AMP is increasingly used to build entire websites, and even hybrid progressive web apps (PWA), which live on a user’s device like an app, but open to reveal a website that loads at the speed of AMP.

“Mobile” is in the name, and for a good reason: AMP started as a way to speed embarrassingly slow mobile page load times. But since then, AMP has transitioned from a mobile-only solution to encompass all formats and device types. Today’s AMP format is a coding language capable of building high-speed pages across devices, including desktop and tablet. Responsive design features make this possible.

The goal was speed and AMP was the answer. Really though, improving mobile load time was a means to an end, and that end was improving the user experience. With this larger goal in mind, the aim to speed web pages broadened to include other aspects of bad user experience. Today’s AMP “comes with all sorts of built-in UX advantages,” says Ubl, like disallowing interstitials and enforcing a free main thread for smooth interactions.

6. AMP is no longer just about accelerating pages

From accelerating pages, AMP has progressed to ads, and even email. AMP ads load 6x more quickly than traditional ads, and they’ve proven beneficial for some advertisers:

For email marketers, AMP for email provides a way to create interactive content within the body of an email. This makes it possible to deliver the most up-to-date content in the body of a message. For example: webinar promotions can reflect spots remaining, users can schedule meetings with an interactive drop-downs, etc.: 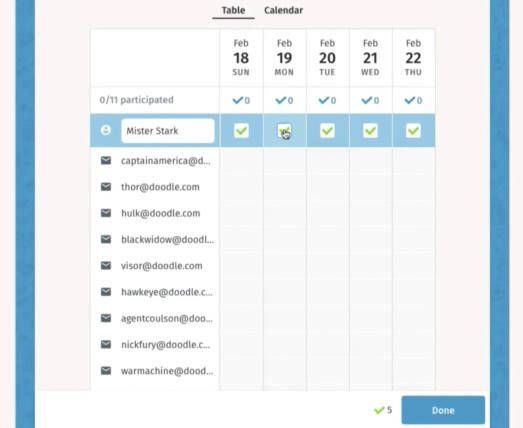 Due to so many of the changes in the AMP format since it started, even the name is no longer a reflection of what the framework can do. In a blog post, Paul Baukaus, a developer for AMP, says:

I’ve been struggling to properly explain what AMP is for a while now, especially to those who are familiar with its long-form: Accelerated Mobile Pages. The reality is that we’ve outlived our own name long ago.

When you consider that AMP is no longer strictly about accelerating, or mobile, or pages, it makes sense that the name has changed. Today’s AMP is just “AMP.” Not short for anything. Though, if it must stand for something, says Bakaus, “how about Awesome Magical Power.”

GDPR was a landmark development in the battle for internet privacy, but it’s not the only one. As more governing bodies make internet privacy a priority, AMP has prepared itself to follow suit. Today’s AMP format has been updated to comply with new CCPA guidelines, which means publishers can now include multiple consent prompts and trigger the right one based on the user’s location.

Personalization is the modern marketer’s most valuable tool. Segmenting groups based on key identifiers makes your offers more relevant, and in turn, increases the likelihood users will claim your offer.

To make personalization more possible through AMP, the team plans to improve geolocation targeting. With the element amp-geo, marketers will soon be able to uncover US state level detections of users, and to deliver content based on that:

10. It’s now possible to use AMP and JavaScript together

One of the AMP format’s defining characteristics was that it restricted the use of JavaScript. This helped with improving load times but made it difficult for developers to create more dynamic content. Today, you no longer have to sacrifice one for the other.

With the help of the component amp-script, you can use JavaScript on your page without bogging it down with excessive code. In a blog post, Naina Raisinghani, Product Manager of the AMP project at Google, elaborates on how:

It’s an AMP component that runs your own JavaScript in a separate Worker thread. This lets you add custom JavaScript to your AMP page while still retaining its lightning-fast speed!

<amp-script> lets you cover use cases that you couldn’t with existing AMP components. It also lets you share code across your AMP and non-AMP pages. You can even use a JavaScript framework. Here are some of the examples the team working on <amp-script> has built:

Start using the AMP format on your post-click pages

AMP is much a different format than it used to be. And one of the biggest advantages to it now is that it can support pages that aim for conversions. When load time is a major factor in conversion rate, even a fraction increase in speed can mean a lot for the bottom line.

Learn how to integrate and scale your most important post-click landing pages with AMP in a demo of Instapage.