Few technologies have brought such widespread change to digital advertising as real-time bidding. Today, it’s the go-to way for advertisers to reach audiences across the internet.

Still, though, there’s some confusion about how it works and what it entails. Overlapping technologies and jargon are to blame. Here, we clear that up, and speculate about RTBs unclear future.

What is real-time bidding (RTB)?

Real-time bidding refers to the process by which algorithms bid, on behalf of advertisers, for ad space on a publisher site. Between the moment a visitor clicks a link to a publisher site and the page loads, these algorithms take part in a “real-time” auction to determine which ad to load for the visitor to see. The placement is awarded to the highest bidder.

As opposed to traditional manual insertion methods of placing advertising, these ads are placed programmatically, making them easier to run with a higher return on investment. While RTB isn’t the only type of programmatic advertising that exists, it’s currently the most popular. It’s so popular, in fact, that by 2021, it’s estimated that RTB algorithms could generate more than $40 billion annually, compared to just $3.5 billion in 2017.

How it works: The real-time bidding process

The real-time bidding process is so fast and subtle that its targets don’t even know it’s happening. Reaching these targets — website visitors likely to buy — is the end goal of a process that involves four main parties:

The publisher is the website a visitor navigates to, and it’s where advertisers bid for ad space to reach that visitor. With the help of a supply-side platform (SSP) — software for putting ad inventory up for sale — this space can be sold any way the publisher pleases. And it’s not always done through RTB.

If a website has particularly valuable ad space, like a highly trafficked or visible page, for example, it might sell that space through a programmatic direct deal.

A programmatic direct deal is closer to the traditional method of selling ad space, simply translated to the internet. These deals don’t occur in real-time, but in advance more intimately: between one advertiser and publisher, as opposed to a free-for-all auction environment. It’s a way for high-quality advertisers to guarantee a valuable audience, and for publishers to guarantee high-quality ads in premium locations.

The same goes for selling ad inventory in a private marketplace. As opposed to the open marketplace, this is one that’s invite-only. A select high-quality group of advertisers is invited by a network of publishers with premium inventory.

Any inventory that isn’t filled through a direct deal, however, will often be sold through ad networks that offer the space to other bidders through RTB.

The draw of RTB on the open marketplace is reach, targeting, and convenience. Ad networks are what make it all possible.

Ad networks were born out of a problem with supply and demand as it relates to internet ad space. As more and more sites became capable of hosting advertising, it became increasingly common for that space to go empty. At one point, it’s estimated as much as 40-60% of a given publisher’s ad space remained unsold.

Networks bundled inventory in a way that made it easy for advertisers to access a mass of impressions across the internet. As long as a publisher is part of the network an order is placed in, there’s a chance the ad will show up on a vast number of websites. The Google Display Network, for example, spans over 2 million publishers, and reaches 90% of people on the internet.

That means advertisers have wider access to their audience, driving down competition for each placement. Not only that, but they can retarget on any of the other 2 million publishers in the network.

Before networks like this, if a visitor abandoned a site your ad was placed on, the chance they saw your ad again was significantly lower. This made it difficult to provide any continuity throughout the buyer’s journey.

Today, with access to countless sites across many networks, advertisers can target precisely, retarget nearly everywhere, and reach almost every user who might be interested in their offer. This happens with the help of an ad exchange.

Sometimes the terms are used interchangeably, but “ad network” and “ad exchange” are different entities. While ad networks constitute the formal collection of publishers, the ad exchanges are platforms that facilitate the sale of advertising.

In a blog post for Gimbal, Cameron Fitchett illustrates their differences with a comparison to the stock market:

In that scenario, ad networks are the private actors – or stockbrokers – who offer select groupings of ad inventory that will satisfy a specific need. In contrast, ad exchanges act like the stock exchange itself, facilitating the buying and selling of inventory in an automated fashion on an open market.

The advertiser has an audience to reach. They know behaviors, demographics, locations, etc., that result in the highest possible return from their audience. Before real-time bidding came into existence, they reached that audience by purchasing ad inventory ahead of time. It was a much slower process, and targeting was limited, and this greatly impacted ROI.

For example: A publisher like Forbes may have been able to offer ad space on the marketing section of their website, claiming their readers are primarily ages 35-59 and composed of senior marketers, managers, salespeople, and executives.

An advertiser could purchase that space for a certain number of impressions, or a certain span of time, but the targeting would not be so narrow.

Would the advertiser reach exactly who they wanted to? Maybe.

Would these people be interested in their offer? Possibly.

Instead of placing orders site by site, a DSP can help an advertiser place them across groups of sites. This allows for the targeting of people over placements — meaning, instead of buying ad space on one website, or one page of one website, advertisers can choose to target the behaviors, demographics, locations that provide the best return.

That doesn’t mean you can’t target based on specific placement, time, reach, keyword, cost, or other parameters; it simply means that there are far more powerfully precise options available for targeting than there once were. Once an order is placed, the visitor triggers the auction.

The visitor is part of the audience that an advertiser is attempting to reach. The visitor doesn’t purposely play a part in the ad that he or she sees, but by allowing the collection of cookies, they make it possible for ad software to determine the value of their impression. And not all impressions are equally valuable.

Say, for example, a user has visited your website, placed items in their cart, and abandoned that cart before checkout. That impression is likely more valuable to you than it is to other businesses that haven’t drawn the user to the checkout stage. Therefore, you may be willing to pay more for that impression.

All this is taken into account during the auction, which is triggered after direct deals are filled, and a user navigates to a publisher page with unfilled inventory. The user notices nothing as the auction occurs. For publishers and advertisers, though, it works in waterfall fashion, which means it looks something like this: 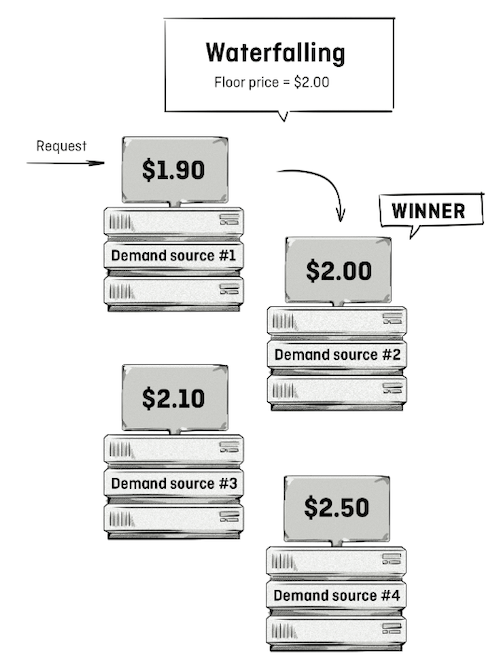 The only problem is, there were bidders in the next exchange that would have exceeded that bid, which means publishers miss out on major revenue.

This has led to the rise of header bidding, which, instead of calling one ad exchange at a time, offers inventory to several: 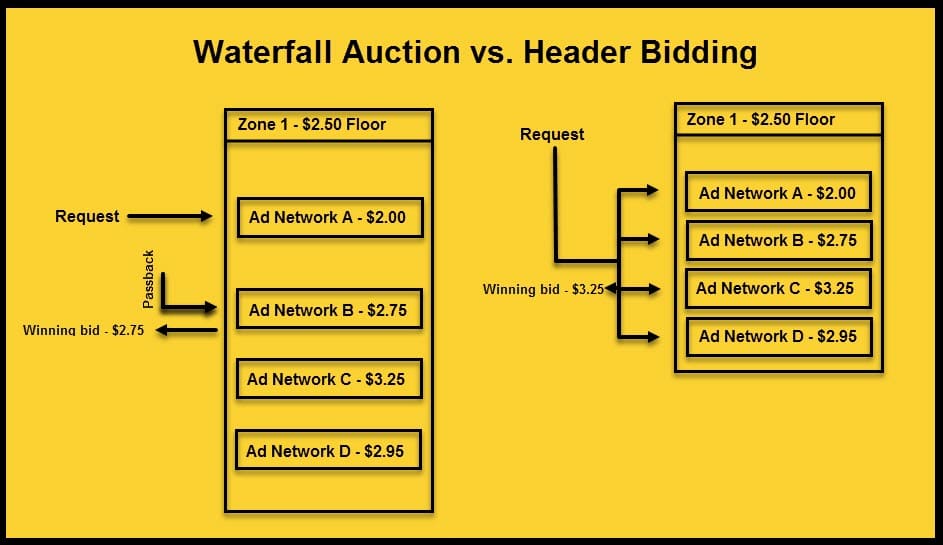 This way, publishers get the revenue they rightfully earn, and advertisers get the placement they’re willing to pay for.

However, header bidding comes with issues of its own: much more work for publishers when it comes to implementation, and slow load times for visitors. As studies have shown, it doesn’t matter how you conduct your auction if your page loads slowly. After 3 seconds, more than 50% of visitors will abandon a web page.

While solutions to the problem with header bidding have been slowly introduced to the public, it’s still a technique that’s coming into its own. A report from eMarketer claims the tactic has reached “maturity,” but only says that “more than half” have adopted header bidding. “Technical limitations,” according to eMarketer, will keep it from having much success with programmatic video and in-app advertising.

The problems with real-time bidding

Real-time bidding on the open marketplace is convenient, fast, and it can be effective. But there’s a major trade-off in transparency.

The rise of programmatic has spurred a revolution in digital advertising, but it’s also brought what Chris Liversidge calls “an unprecedented waste and unparalleled opportunities for fraud.” He adds:

The challenge the industry faces is that, in some cases, advertising is not merely ineffective but unseen. Audiences cannot be converted because they are concocted, and spending is not so much wasted as stolen.

Along with a study that showed programmatic video advertisements had 70% more bot viewers than average, he sites a survey of his own. In it, he asked 150 heads of marketing of companies with revenue over 150 million pounds about their confidence in programmatic. Here’s what he found: 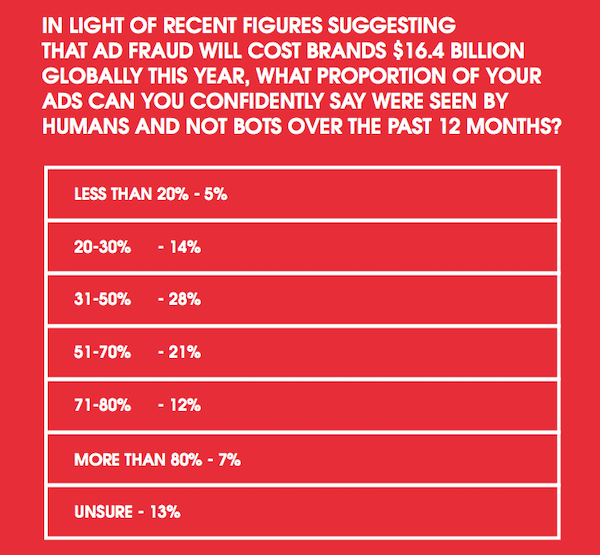 Today, his respondents have even more reason to worry. Recent estimates of ad fraud have reached as high as $19 billion. By 2022, ad fraud is expected to get astronomically worse: 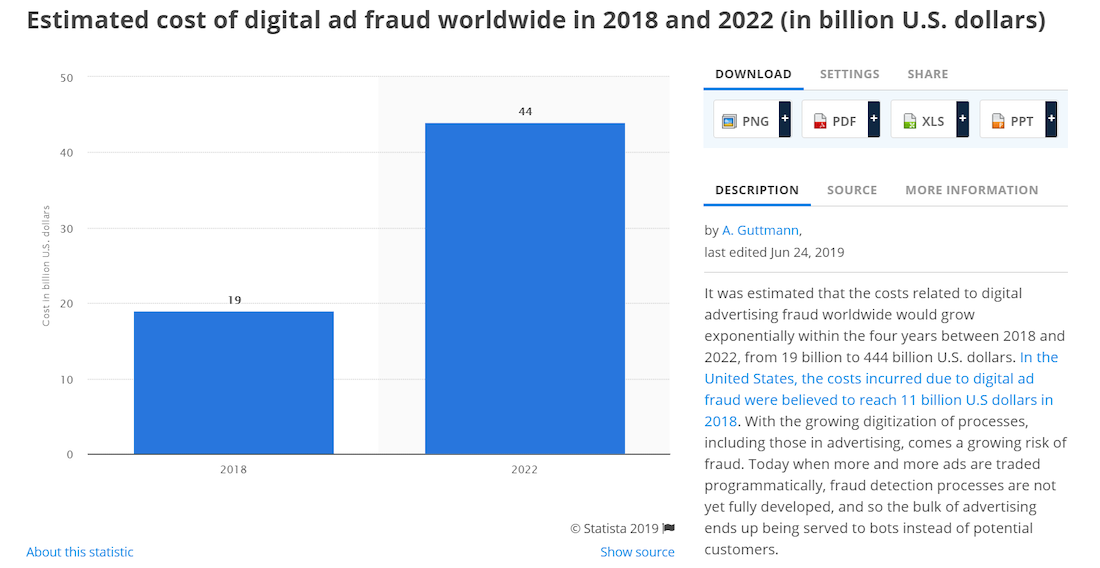 This lack of confidence in the system, and steps being taken to solve the problem, has more advertisers moving away from RTB and toward private marketplaces, says eMarketer Principal Analyst, Lauren Fisher:

An ongoing concern for many buyers and sellers is transparency—both in terms of supply chain quality and how dollars are allocated. These concerns are not deterring most from buying programmatically. We mainly see marketers redirecting dollars away from the open markets toward more private, controlled setups. As these shifts occur, some marketers are testing the waters by bringing their programmatic efforts in-house. Others are simply forcing their partners and agencies to be more accountable for their ad spend.

Trends in budgetary spending reinforce her statement. By 2020, ad spend allocated to controlled, private marketplaces, is expected to surpass spending through RTB on the open marketplace. After that, it’s expected to grow even further: 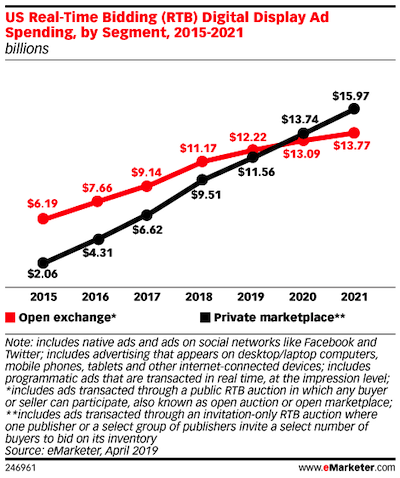 Should you invest in RTB?

If you invest in RTB, you should be able to account for your ad spend, and campaigns should be hitting revenue goals. Know the risks of ad fraud, and what the signs look like. Do diligent research on any ad network you consider spending your budget on, and consider more controlled, private setups before the open marketplace.