For business owners, it’s a common question: When it comes to Facebook ads vs. Google ads, where is your budget better spent?

The answer, however, isn’t as simple or straightforward as the question. And it rarely is, especially when you pit two industry titans against each other.

One one side, Google has made a name for itself as the internet’s go-to search engine. On the other, Facebook is where more than a fourth of the world stays in touch with friends. Both are valuable places to advertise — but for different reasons. For your next campaign, which you choose depends on several factors. First, a definition of both types of advertising.

Facebook advertising is a paid system that allows businesses to serve branded messages to users of the world’s largest social network. Placements on Facebook include the news feed, the sidebar, and the audience network on mobile.

What is Google advertising?

Google advertising is a paid system that allows brands to amplify their messaging throughout the Google network. That includes over 2 million websites on its display network and, on its search network, the results pages of 3.5 billion daily searches.

Both Google and Facebook have reach that extends to all corners of the internet. Google’s display network reaches 90% of people online, and searches in its proprietary engine have topped a trillion per year. Facebook is the world’s largest social network, with over 2.2 billion users.

Advertisers are no strangers to either network — Google and Facebook own 60% of digital advertising dollars worldwide. With Google dominating, it’s clear, there’s something for everyone on the network — but at what cost? Here are a few things you’ll want to consider before you choose one over the other.

How granular your targeting needs to be

As we know too well, Facebook keeps an Everest-sized mountain of data on its users. Even though it’s cut ties with third-party data collectors, the social network still allows advertisers access to a trove of audience information, which is primarily offered by users.

“People share almost every conceivable detail of their lives on Facebook,” says the WordStream team. “From meeting and marrying partners to the birth of children or the celebration of new career moves, Facebook’s users share the joys and accomplishments of life’s milestones with their friends and networks every single day. They also search for and consume content that aligns with a huge range of personal interests, beliefs, ideologies, and values, presenting advertisers with a unique opportunity to tailor advertising messaging to target audiences in ways previously considered impossible, or even unimaginable.”

Google, on the other hand, serves ads contextually based on keywords and behavior. It has no storage of user information that can compare to Facebook’s. That makes Facebook the choice of advertisers whose product may center around a specific detail in someone’s life, like the birth of a child, for instance. Joe Castro elaborates:

If the purchase of your product or service strongly correlates based on specific life events, then Facebook is most likely your best option. Facebook has powerful targeting capabilities such as being able to target based on life-changing events. For instance, targeting those who have become recently engaged or married, those turning 65 (Medicare insurance), or those who recently had a new baby are examples of life events that can all be targeted with precision via Facebook ads and not as easily or effective through AdWords.

If targeting specificity is what you’re after, many marketers agree that Facebook is where to start.

Google has reach and seniority on its side, but when it comes to ad creative, Facebook takes the cake. Formats like the immersive Canvas (now known as “Instant Experience”) can make a product showcase out of a user’s screen, 360 video can turn a mobile device into a window to the world, and lead ads can generate leads straight from the platform.

In contrast, Google’s ad types are myriad, but they’re far less engaging. If you’re looking instead for flexibility in the way you advertise your product, you’ll want to go for Google. For engagement, opt for Facebook.

So, what are you advertising? Is it something sleek, emotive, or fun, worthy of engaging ad types that could boost viral potential? Or does your campaign’s success come down to the repetition of a message in contextual environments? According to Emily Reiffer:

You should consider whether the product you are selling is best suited to Facebook where users can broadcast to their engagement with your product to their thousands of friends, like a cool T-shirt company that mainly sells to younger customers or Google remarketing if you are selling wholesale toilet paper. That’s not to say that all B2B remarketing should be done on Google though, the important thing to remember is how engaging is the thing you are actually selling?

If your ad campaign has viral potential, the ability to like, comment, and share will only add to its reach. If it doesn’t, Google ads may provide a better audience.

Ultimately, where you elect to allocate your budget may depend on the industry you’re in. Google Ads is known to draw high-value traffic in select business spheres. And as more businesses in those spheres flock to the network, bidding highly on keywords relevant to you, they drive cost per click up. John Castro explains based on experience:

There are certain industries or sub-industries that are crazy expensive from a CPC perspective. For example, if you are considering advertising any of these keywords on Google, and you do not have an insanely large budget, you might want to reconsider. I have firsthand experience working in higher education, finance, legal, and healthcare; all are extremely competitive within AdWords and therefore very difficult to be successful in..

The goal of your campaign

The goal of advertising, ultimately, is to attract buyers and keep them. But, not every ad goes for the sale. Like members of a team or business, each campaign plays a unique role in accomplishing that ultimate goal. Here are a few smaller goals you may be considering for your next ad group:

Top-funnel goals: At the largest part of your funnel, the top, is where visitors begin to learn of your brand and its solution. They might follow and engage with your social media accounts, or maybe search for information on a particular problem, say, whether Facebook ads or Google ads are right for their business. So, common ways of measuring awareness of your brand are:

Middle-funnel goals: Where the funnel starts to shrink in size is where prospects begin to eliminate options within the same category of product or service. For example, if prospects have determined to outsource PPC management to an advertising agency instead of purchasing software to do it themselves, this stage is about finding the right agency. A business trying to measure success at the middle of the funnel could do so with:

Bottom-funnel goals: The bottom of your funnel is where prospects make a decision to purchase your product or go with another. Some common ways to measure bottom-funnel success:

So why do these stages matter? They correlate to the users of each network.

Facebook stands out as a top-funnel titan, with the ability to spread viral awareness that Google can’t match. Social is where people go to browse and share the things that matter to them. Those things are rarely middle and bottom-funnel campaign material.

Instead, what succeeds on Facebook are images, videos, and messages that entertain or evoke emotion. This “Alexa loses her voice” ad from Amazon, which has racked up nearly 50 million views at the time of this post, is a great example of such a viral campaign:

By comparison, a Facebook campaign that attempted to sell units of Alexa would likely be far less successful than this subtle, light-hearted look at the product.

Google, on the other hand, beats Facebook when it comes to drawing bottom-funnel traffic. The reason is the intent of AdWords searchers.

By “intent” we’re referring to a searcher’s need for a solution to their query. After all, that’s why you navigate to a search engine in the first place. If you’re searching, you’re looking for an answer.

When that query contains keyword phrases relevant to a Google advertiser’s business, an ad on the corresponding search engine results page appears. These ads drive searchers to post-click landing pages where they can claim an offer relevant to their solution. If they’re searching for email marketing software, a Google ad might direct them to a page where they can trial the software for free. Here’s an example from SendGrid: 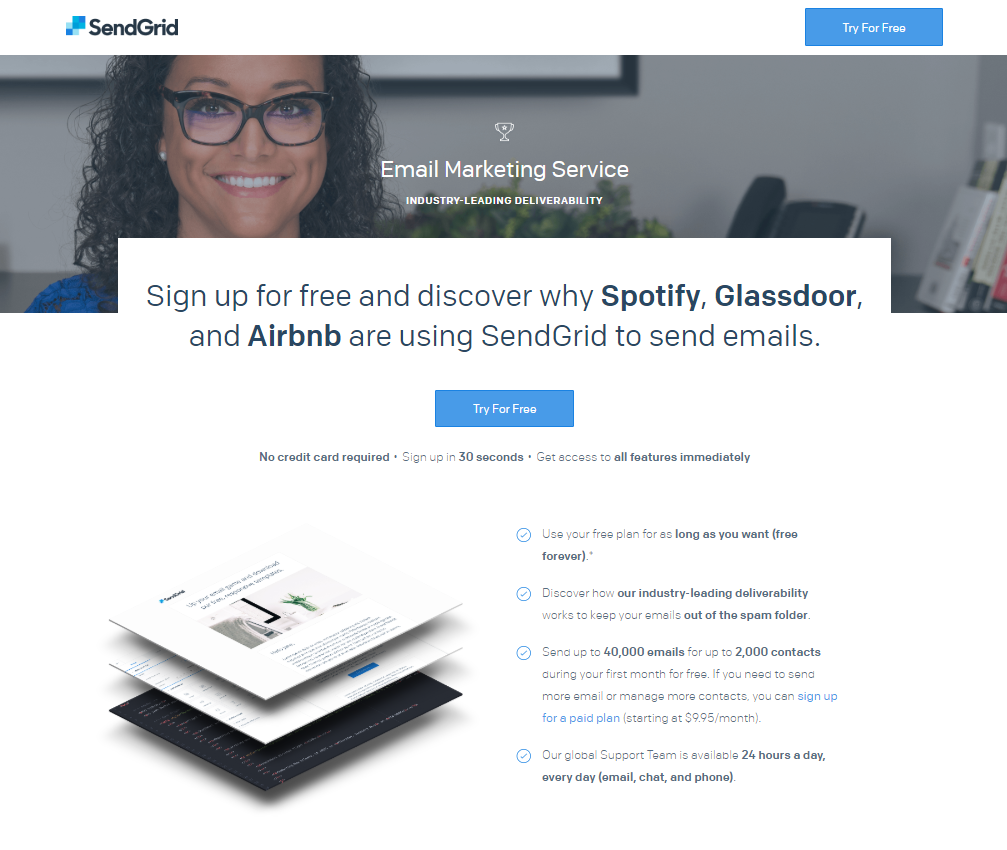 In a post that takes a good look at both Facebook and Google, Saunder Schroeder makes the case that which platform you choose depends on whether you’re selling to customers or businesses.

“In general,” he says, “the quality of B2B traffic and leads you get through Facebook tends to be lower than what you get through AdWords. Your CPC might be $1.00, but if you’re driving the wrong traffic, you’re not actually saving any money.”

As for B2C? “That’s Facebook’s domain,” he adds. The reason, according to Schroeder, is the strikingly low cost of clicks on the network in comparison to Google Ads:

Unlike B2B marketing, where your LTV can easily absorb a relatively high CPC, B2C advertising is much more cost sensitive. For our average B2C client, the cost-per-click is around $0.90, although this can range from $0.05-3.00. In contrast, these clients pay around $8.00 for clicks on AdWords.

But, cheaper usually means lower quality. We know Facebook traffic will be much less qualified than Google Ads traffic, which is full of intent. Still, this is no problem, says Schroeder, “because the CPC is so much lower on Facebook, your cost-per-conversion is still lower with Facebook than you see on AdWords. For example, say you have an 8% conversion rate on Google AdWords and a 3% conversion rate on Facebook:

This comes down to more than how big your budget is. It’s about spending as efficiently as possible. With a higher conversion rate on one network, it may seem ROI is higher there. However, the truth may be you’re paying more per conversion.

Breaking down the numbers

That means you could spend ten times more on Facebook — generating 300 conversions for $7,000 — and spend a thousand less than it cost to convert 80 people on Google. Too often, marketers get caught up in conversion rate, but higher conversion rate doesn’t guarantee efficiency.

As is the case in many comparisons of tools and networks, the answer’s rarely black and white, and it rarely has to be one or the other. Facebook and Google can work powerfully together, especially when it comes to remarketing.

With the Meta Pixel and Google retargeting, advertisers can draw visitors back to their post-click landing pages when they don’t convert by serving remarketing ads throughout both networks. Many marketers actually recommend starting with remarketing on both networks.

When it comes to where you should spend most of your budget, there’s no right or wrong answer. Simply, it depends on which works best for you. Let these considerations guide you if you’re just getting started, but continue to collect data on which works best, and adjust accordingly.

Which platform offers a lower CPC? Which traffic produces the lowest cost per conversion? Measure KPI’s throughout the funnel, and boost campaign conversion rates with post-click landing pages from the industry’s most robust post-click optimization platform. Sign up for an Instapage Enterprise demo today.