If you’re new to Facebook Ads or don’t have experience navigating the robust advertising platform, it can be frustrating. Especially when you’ve spent a copious amount of time crafting that perfect ad campaign, publishing it, and then realizing your ad isn’t delivering. Maybe your Facebook ad is active but not delivering enough to generate the exceptional results you know are possible — or maybe it’s not delivering at all.

Either way — instead of panicking, or abandoning the campaign altogether — ask yourself:

The answer usually turns out to be something simple, and easy to troubleshoot.

1. Your ad has been disapproved

If you’re experiencing no ad delivery, it may have been rejected. Facebook ensures every ad on their platform follows policy before showing it. If it doesn’t, they’ll send you a notification and email with the reason for disapproval (you can also check an ad’s status in Facebook’s ad manager):

Your ad could be disapproved for any number of reasons including:

If you’ve made sure your ad itself complies with all the guidelines, check the post-click landing page it’s connected to because Facebook’s bots will also crawl it before approval. If your headline or other page content promotes any of the topics Facebook prohibits, your ad could be disapproved as well.

There are two options to troubleshoot: 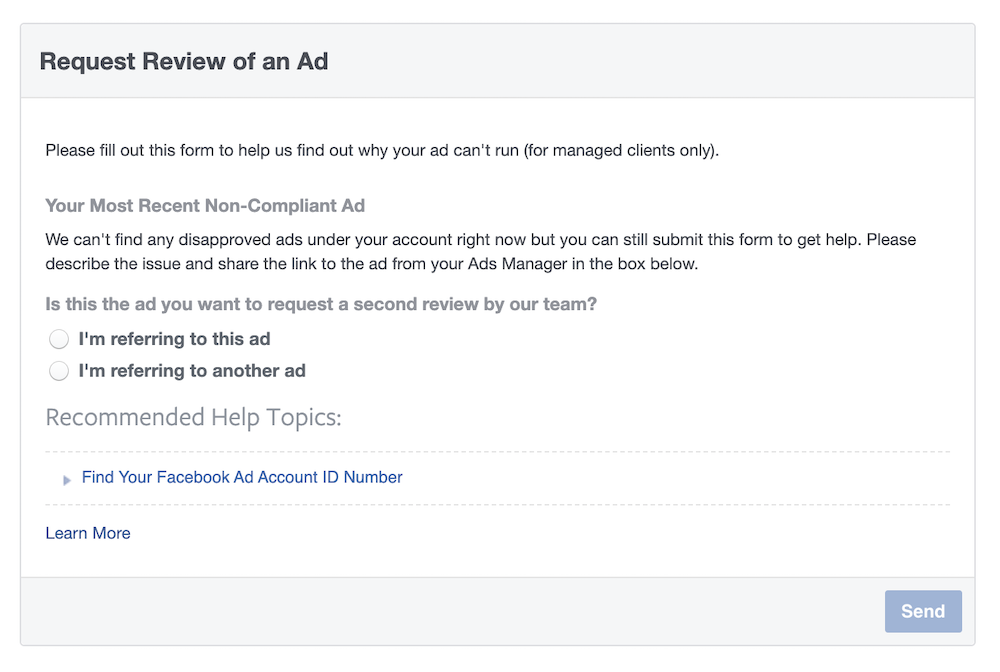 2. Your ad is still in review

Just because you’re ad hasn’t been approved yet, doesn’t mean it’s been denied. Your ad could be stuck in review, which is another explanation for Facebook ads not delivering at all.

Most ads are reviewed within 24 hours, although in some cases it may take longer.

Do not edit your ads until the approval process is completed since edits force the process to start over again.

In contrast #1 and #2, it’s also possible your Facebook ads are active but not delivering. So, for instance, while your ad may have been approved, it might not be showing to many users due to low-quality.

Facebook may deem your ad low-quality if it falls within any of these 3 categories (or #4 in the list next): 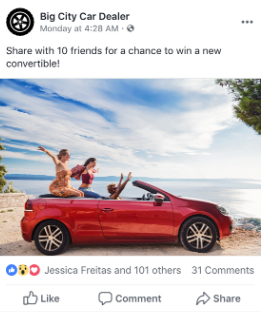 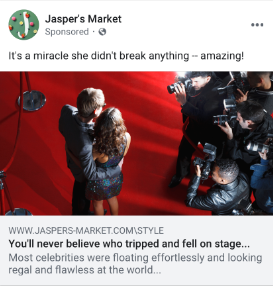 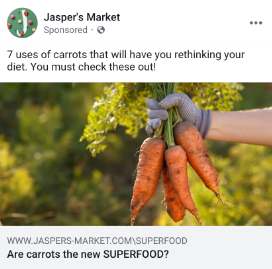 The solution here is simple: Avoid all of the language in the above examples and you won’t have an issue. If you’ve already created an ad that falls under any of those three categories, edit your ad so it complies.

This unwritten rule is often referred to as Facebook’s 20% Rule and could be another reason your Facebook ads are not delivering.

Facebook’s research found that images with less than 20% text tend to cost less and reach more people than ads with more than 20% image text. That’s why ads with higher amounts of image text are considered low-quality and may not be delivered, or may be penalized in auctions (lower reach for the same budget).

The different image text ratings include: 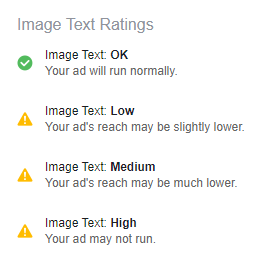 There are some exceptions to the 20% rule:

Since each of these may require an image with essential text, ads containing them may qualify for an exception.

Use Facebook’s Text Overlay Tool to determine the chances of your ad’s reach being limited: 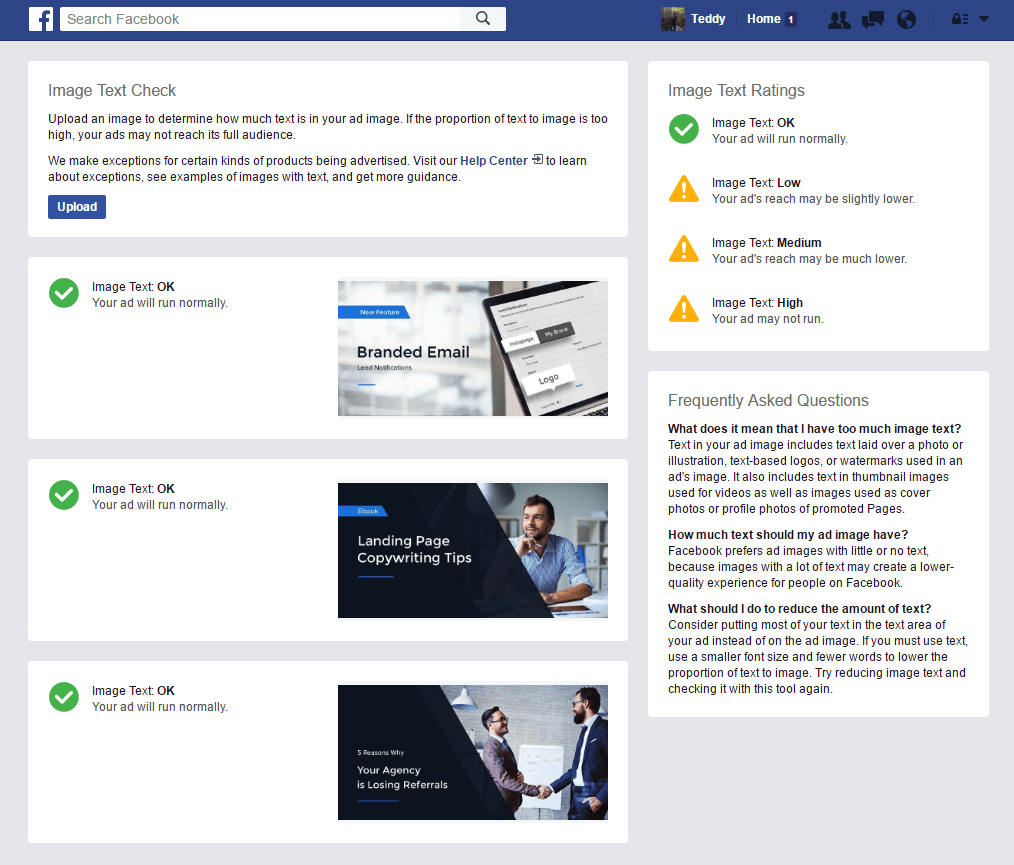 To guarantee your ad runs normally, make sure most of the text is in the body text instead of directly on the ad’s image. If you still need to include image text, use as few words as possible and/or reduce the font size.

An account spending limit can ensure your campaign spending doesn’t exceed your initial intended campaign budget. Even after you set the limit though, it’s easy to forget about it. Of course, once the limit is reached, Facebook will stop showing your ads.

To rerun your ads, change, reset, or remove your spending limit:

When setting up your bidding strategy, you choose what actions you pay for (link clicks, etc.), and how much you want to pay for them based on lowest cost or lowest cost with bid cap:

Choosing “Lowest cost” allows Facebook to select the best amount for your selected action and bid competitively (ideal for most advertisers since it ensures bid price will never be set too low and under deliver).

Adding a bid cap tells Facebook the maximum amount you’re willing to pay for an action, which is where too-low bids could affect your ad delivery.

If your ad delivery declines over several days, consider raising your bids incrementally until you find a middle ground between good delivery and an acceptable bid.

If you’re using a bid cap and facing delivery issues — either raise your bid, or switch to lowest cost without a cap, and let Facebook bid competitively for you.

7. Optimization goal is hard to reach

By selecting an optimization goal, you’re indicating a desired action for your audience, which enables Facebook to target with more precision.

By optimizing for link clicks, you’re telling Facebook to target those more likely to click on links based on user value signals (or their history of interaction with similar ads): 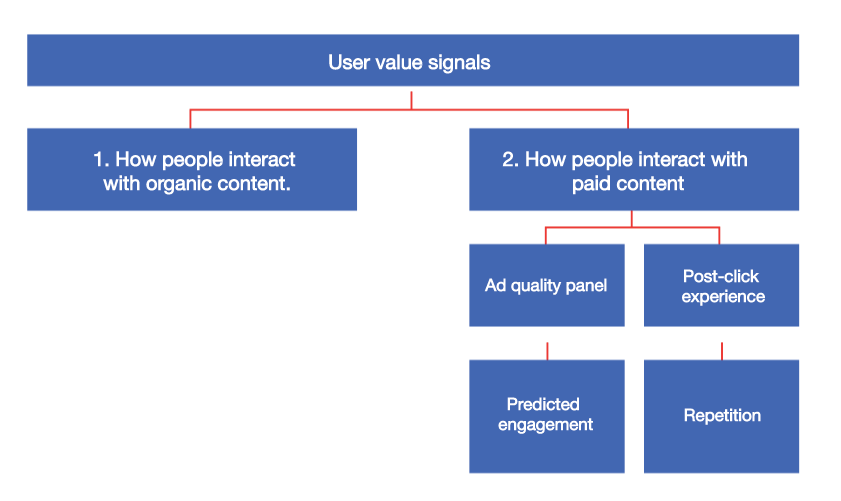 Selecting the proper optimization goal is crucial to narrowing down your audience. However, delivery issues tend to come up when you optimize for conversions.

This is because when you optimize for conversions, Facebook uses that metric as a source for finding ideal targets. Without any conversions, though, there’s not enough data to work with and therefore doesn’t know who could be interested in your campaign.

For starters, change the optimization goal to link clicks instead of conversions. This way, conversions will still be tracked, but Facebook can also see who’s interested in your ads based on who has clicked. Then, once you’re getting consistent conversions (Facebook recommends 50 per week minimum), you can change the goal back to conversions.

People prefer to see ads relevant to them, which is why Facebook considers how relevant each ad is to a person before delivering it to them. As such, if your ad is underperforming, it could be from low relevancy.

If a specific ad isn’t meeting your advertising objectives, Facebook’s ad relevance diagnostics can determine if it was relevant to the audience it reached. And if not, what adjustments to your ad creative, post-click landing page, or target audience could improve performance.

The following relevance diagnostics assess each ad’s past performance in the ad auction over the date range you’ve selected:

The chart below can assist with interpreting a given combination of ad relevance diagnostics: 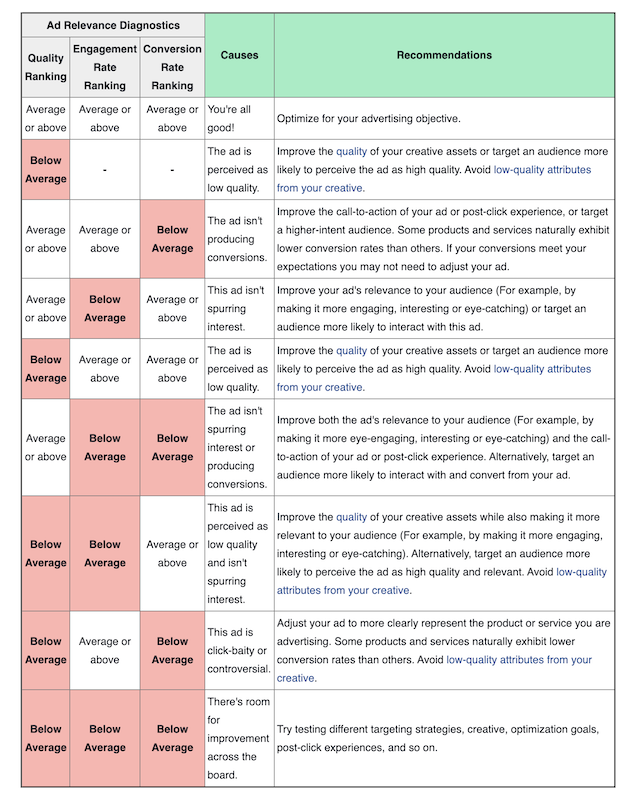 Note: It’s more impactful to move a ranking from low to average, than from average to above-average, so your main focus should be on improving low rankings first.

When audiences across your campaign’s ad sets are nearly identical, Facebook tries to prevent your ads from competing against each other during the ad auction.

Use Facebook’s Audience Overlap tool to make sure your audiences aren’t overlapping:

Facebook will only show your ads during the time you specify, and several scheduling issues could prevent your ad from delivering:

If your ad is set to run in the future and you want it to start now, change your ad schedule.

If the end date has passed, set a new end date.

If your campaign is paused, restart it.

11. Audience is too narrow

Although laser-focused targeting helps prevent spending money on uninterested people, overly narrow targeting will prevent your ads from showing at all.

It’s a fine line, but there are tools to help.

To avoid an audience that’s too narrow, let the Meta Pixel collect some data before launching your retargeting campaign. 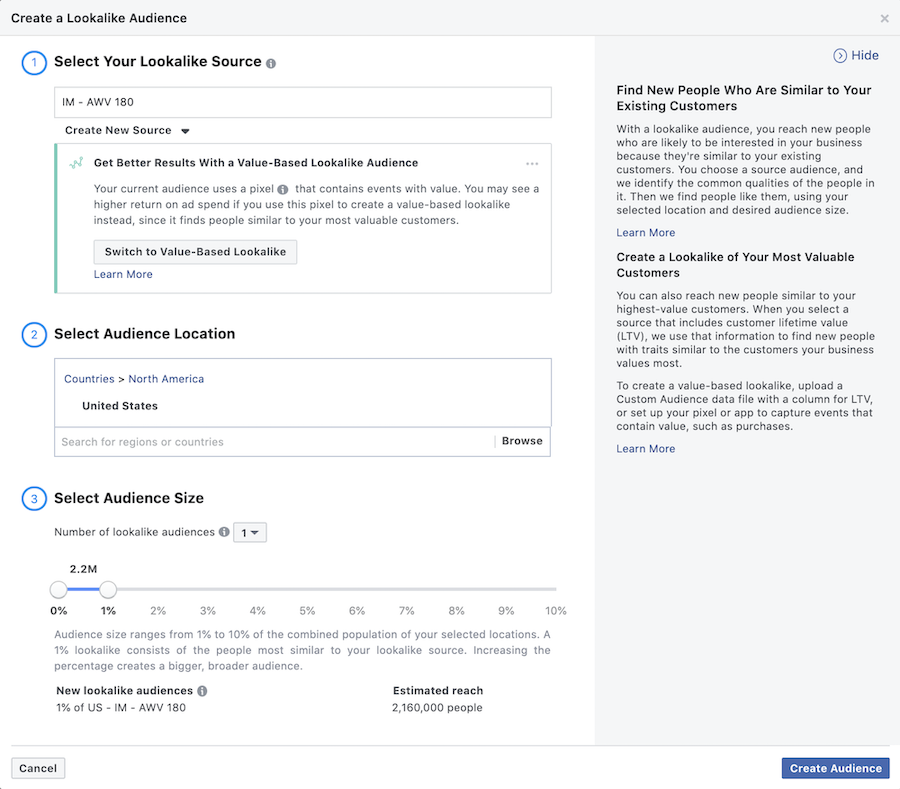 The post-click landing page is equally as important as getting the click. This is why Facebook crawls post-click pages during the approval process.

Design your dedicated post-click landing page with complete message match to the ad and be sure it doesn’t include any of the following elements:

As long as you’re clear on Facebook Ads’ rules and guidelines, you shouldn’t have any issues with ad delivering. If you do, simply take the necessary steps to rectify the issue.

Once your ad is delivering, maximize your ad clicks by connecting it to a personalized post-click landing page. See how you can create pages at scale by requesting an Instapage Enterprise Demo today.