To succeed as a digital advertiser, today there’s lots you need to track: You need to understand your target audience — how and where they buy; you need to follow marketing campaign KPI’s; you need to know industry trends and tactics.

Ad specs are countless more things you shouldn’t have to track down. Luckily, now you don’t have to.

The new Instapage ad specs resource contains all the dimensions, file formats, and sizes — everything you need to know to create compelling advertisements across all devices (click here to download)… 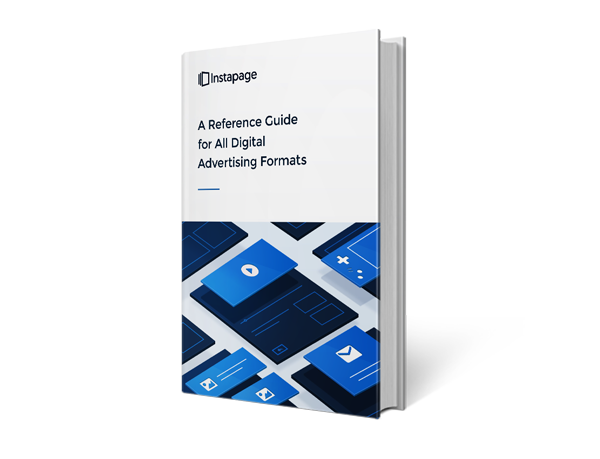 because somewhere along the line, ad specs, platforms, types — it all became too overwhelming for one person to manage.

The ad specs avalanche: Where’d it come from?

It used to be simple: A few digital ad channels, a handful of ad types. There wasn’t much to concern yourself with as an advertiser — no worry of cross-screen display, none of this “seamless customer experience” or customer journey marketing. There wasn’t a need to know anything outside of Facebook, Twitter ad specs, or LinkedIn ad specs. Then came some big shifts. 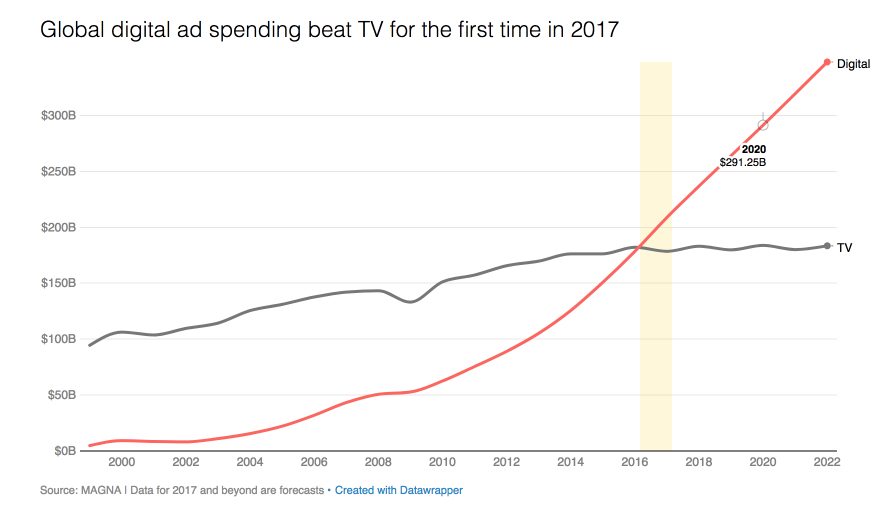 This shift didn’t happen overnight, even though it may seem like it as you sit in front of your laptop asking “where in the world did all these ad types come from?”

Then and now: A timeline of digital ad spend

From a once-thought passing fad, internet advertising has grown to a budget-gobbling behemoth. Trace its growth over the last twenty years and you’ll notice it’s quadrupled in just a decade: 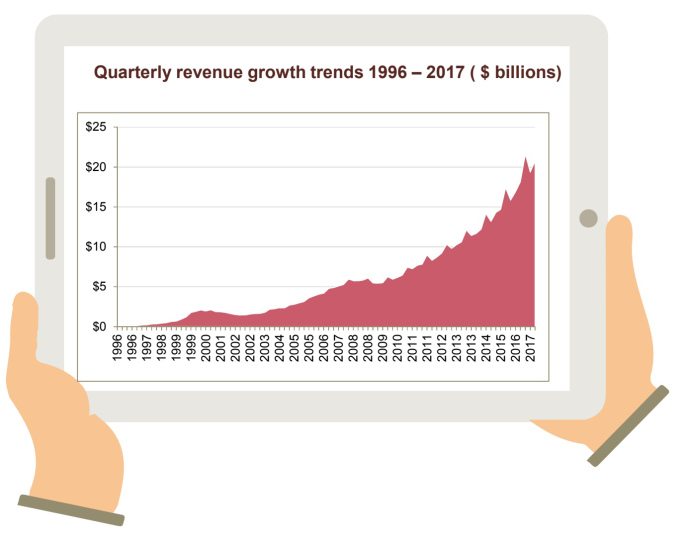 That’s $5 billion in 2007 to over $20 billion in 2017. And if recent numbers are any indication, it’s got plenty appetite for more marketing dollars.

In the first half of this year, US digital ad revenue grew 23% from the same time in 2016 to a record $40.1 billion. Combined with the second half, Recode reports that’s 41% of advertising dollars worldwide — $209 billion compared to TV’s $178 billion.

By $30 billion, businesses have made their preferences clear as far as medium goes. But once they funnel more of their budget into the web, where does it end up?

Growth in the digital ad space isn’t driven equally. While numbers show that spend on all digital ad channels is trending upwards, there’s a big difference in the speed at which they’re growing: 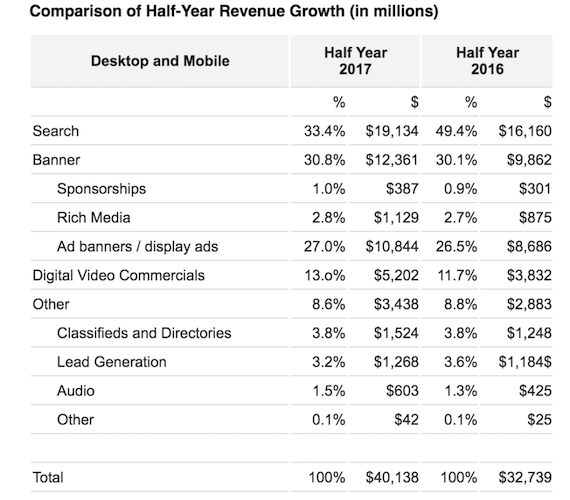 When you go beyond channels to look at specific platforms advertisers are flocking to, it’s easy to see where all the money on search and display is being spent.

By the end of 2017, an eMarketer report predicts that Facebook and Google will have earned 63% of digital advertising dollars — higher than originally expected at the beginning of the year:

By the end of 2017, Facebook and Google will have earned 63% of digital advertising dollars.

According to Monica Peart, Senior Director of Forecasting at eMarketer, the reason is targeting:

Advertisers are increasingly demanding more granularity in targeting capabilities to reach consumers. Google and Facebook have positioned themselves at the front of this demand curve by being the ad publishers with some of the best-in-class targeting abilities in the digital ad market. With Facebook being able to provide targeting based upon consumer interests and Google capitalizing on where those consumers have been through searches, both companies ensure their lead among digital ad publishers.

But even when you know how and where pros are using their budgets, it’s still not easy to navigate the world of online ad platforms. Between audiences, targeting capabilities, ad types, and the ad specs that ensure they display well across devices, discovering the best way to spend your budget can be a headache that quickly turns to a roadblock.

That’s why we compiled the All-in-One Guide to Digital Advertising Platforms and Ad Units. Inside you’ll find a brief look at each platform’s audience and targeting capabilities, along with details about how each ad type works (with examples) and detailed specs that ensure a compelling user experience on any device.

Here’s a quick example of some of the info you’ll find in the new Instapage resource:

As of June 2017, there are more than 2 billion monthly active users on Facebook. Reportedly, just over 80% of women and 75% of men are on the platform currently and the age group 18-29 is the most active, but those 30-65+ also engage with it as well. Whatever your ideal audience is, you can find it here, which is probably why over 90% of businesses invest more than 7.5 billion to reach people with Facebook advertising. Here are the ad units they’re using to do so:

With Facebook’s Carousel format, you can show up to 10 images or videos in one ad to an audience of your choosing, and each image or video can have its own dedicated link. Use it to highlight separate products, services, promotions, or as a virtual flipbook to tell a story about your company. 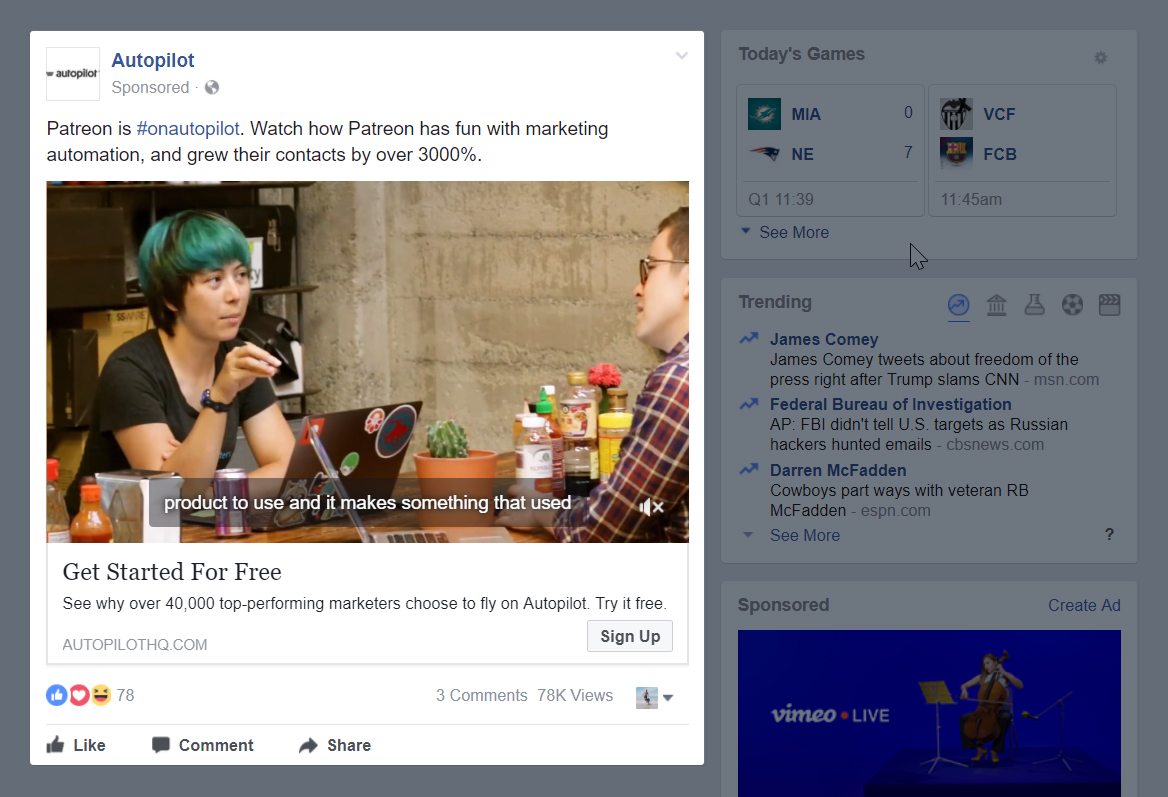 Marketing messages delivered with video have the ability to catch the eye of scrolling social users. That’s why, today, nearly half of all business owners are allocating a portion of their budget to Facebook video. Here are the placements they can choose from:

(More on on other placements and types inside, including Instagram ad specs.)

Reddit’s overlooked by a lot of advertisers, but with 300 million users, its community is larger than Pinterest and nearly the size of Twitter. It’s also a very engaged community that posts 5 million comments and conducts 40 million searches per day.

According to Pew research, that community is 67% male, and 64% are under the age of 30 — 93% are under the age of 50. Over 40% have a college degree. To reach them, advertisers can target by location, subreddit, platform (mobile or desktop) or even specific interests like art, design, books. Here are the ads they can do it with:

Promoted posts are sponsored ads at the top of Reddit web pages that blend natively with other content. Users can click through to read a thread or visit an advertiser’s post-click landing page via a URL included in the post.

Banner units are found on the right sidebar of Reddit pages. These image ads with click-through destinations are only available for purchase via Reddit’s direct sales team. 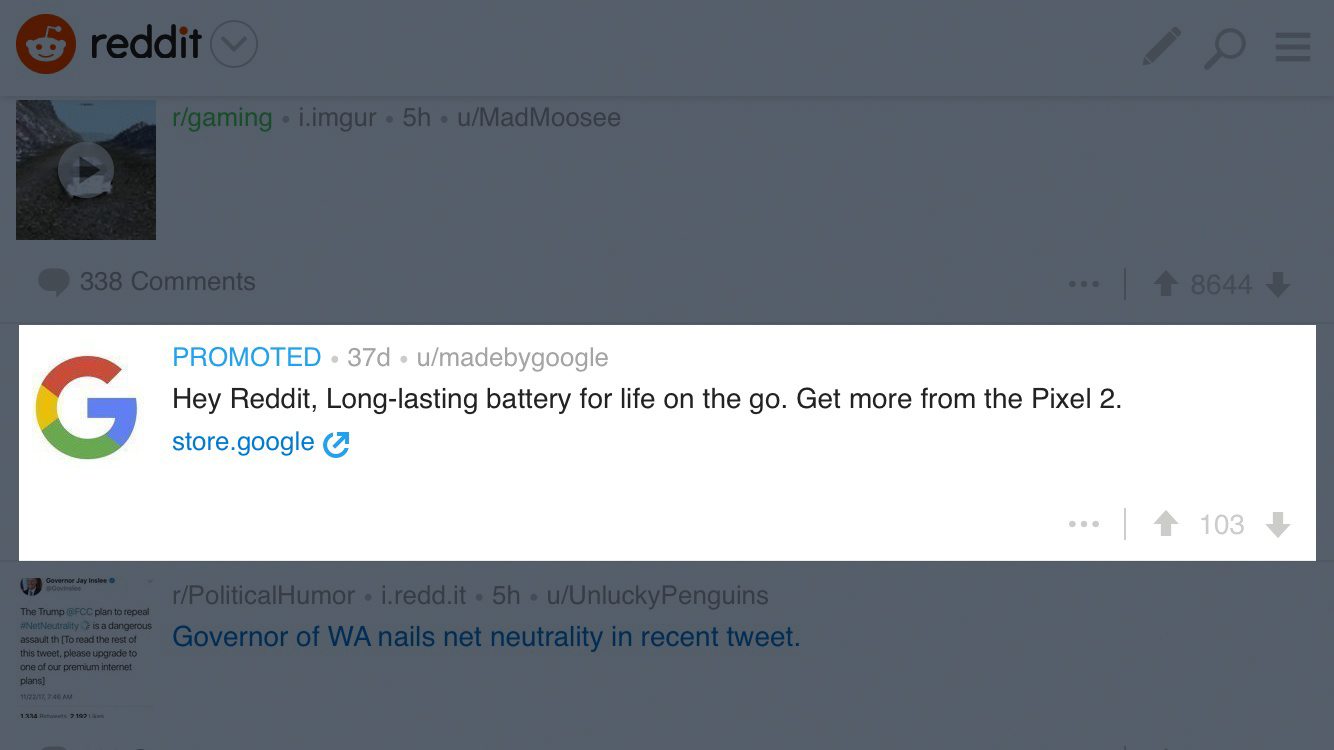 Get your copy of the All-in-One Guide

claim your copy new Instapage resource below. Then optimize your prospects’ post-click landing page with the most robust post-click optimization platform on the web.