Why Programmatic Advertising May Be the Future of Media Buying

Have you ever sent someone a fax from the beach?

It was the same campaign that birthed the internet’s first banner ad, which willed people to click with copy that would be laughably ineffective today.

Today, though, a new method is improving the experience for both advertisers and internet users alike.

What is programmatic advertising?

By the end of 2017, eMarketer anticipates that programmatic ad spending will reach $27.47 billion, and hog 72% of all spending on display ads: 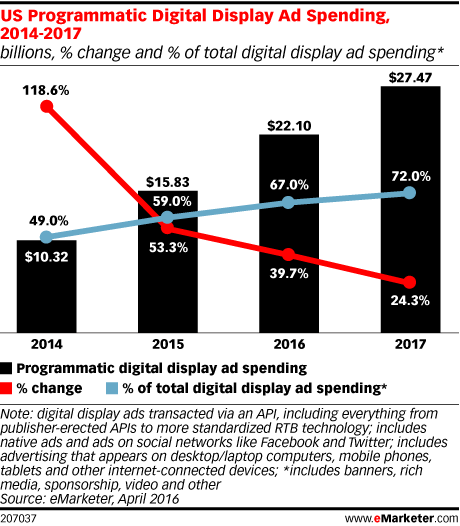 So, why has programmatic ad spending nearly tripled in the last three years?

Before programmatic marketing, ad space was bought and sold by humans. The process was slow and inefficient, taking RFPs, meetings, and negotiations before an advertisement could be manually published.

Online, it worked like this between two parties: publishers and advertisers.

And it worked… until the number of publishers began to grow at a pace advertisers couldn’t keep up with. Supply of ad space became far greater than demand, and it wasn’t uncommon for 40-60% of publisher inventory to go unsold to advertisers. Times had changed, said Jeffrey F. Rayport:

Try negotiating over lunch with millions of publishers or sending insertion orders to thousands of them using a fax machine. Advertising automation is the inevitable solution to an otherwise insurmountable problem.

That automation came in the form of networks that categorized ad inventory in a way easily understood by media buyers. Today, programmatic media buying via an ad exchange allows marketers to do a few things:

Now, you can purchase ad space yourself without all the red tape. And you can get your business in front of people who might have a need for it.

The result is a more scalable way of serving ads that people may actually click, says Aly Nurmohamed, Vice President of Global Operations at Criteo:

The more data marketers have at their fingertips, the more personalized the ads become. That’s what programmatic over the last few years has really pushed forward. Secondly, programmatic allows you to test and learn and find the content that works best – and it can be done in a far more scalable fashion.

Here’s how advertisers are using programmatic to serve up personalized experiences:

For most, real-time bidding on an open marketplace is the more popular of the two programmatic media buying methods. The reason is that it allows businesses to serve ads on a wide variety of websites to only people that meet their buyer personas.

First, with a supply-side platform, publishers offer up access to an audience in the form of ad inventory — space on their web pages where an ad can be served to a visitor. Then, on an open marketplace, advertisers bid to reach that audience or demographic. Space is won by the highest bidder during an auction, which looks like this:

Once an internet user clicks a link, the auction begins. Essentially, software says to advertisers, “This is what we know about the person visiting our page based on their browsing history, behavior, device type, etc. What are you willing to pay to show your ad?”

What you’re willing to pay will be based on what your odds of converting the visitor are. Digiday offers an example:

Zappos might recognize that a user has previously been on its site looking at a specific pair of shoes, for example, and therefore may be prepared to pay more than Amazon or Best Buy to serve ads to him. The price of impressions is determined in real time based on what buyers are willing to pay, hence the name ‘real-time bidding.

A process like this used to take days, weeks — sometimes even months. Today on the open marketplace, it spans milliseconds.

And the experience is just as fast in private marketplaces, where publishers and advertisers meet for a more transparent media buying experience.

These are exclusive, invite-only marketplaces in which a publisher (or small group of publishers) offer their ad inventory to a particular group of advertisers. This method of ad buying skips the ad exchange altogether:

The benefit here is that all parties know what they’re getting: Advertisers know where their ads will be placed, while publishers can ensure only quality ads are displayed to their audience.

Compared to RTB, the programmatic direct method is closer to traditional media buying. This process allows advertisers to purchase a guaranteed number of impressions ahead of time:

“It’s the equivalent of booking a hotel room directly through the hotel, rather than from an online retailer like Expedia,” says Rebecca Maynes from Mediative.

Often, publishers will reserve their most premium placements — on home pages for example — for programmatic direct deals with top-tier advertisers. On the other side of things, advertisers who want to guarantee placements on a valuable publisher can do so in advance. AdAge’s George Slefo explains why:

Sometimes digital media buyers want to lock up particular ad inventory, especially video, on premium websites such as The New York Times ahead of time. They may want to lock in a decent price on ads they know they'll want, or just to make sure they've got the right placements for a campaign they're planning.

Like with private marketplaces, the benefit here is transparency and quality — something that open marketplaces have struggled with for years.

Which is right for you, RTB or programmatic direct?

In the earlier days of programmatic advertising, RTB looked appealing to everyone. The benefits were plenty, and there seemed to be little downside to bidding for impressions across a wide variety of publishers. As an advertiser, as long as you were reaching who mattered, what did you care?

Well, you might care if your brand’s advertisements began showing up next to animations of domestic abuse, or if you were unintentionally funding terrorist organizations by awarding them chunks of your ad budget.

Or, as a publisher, you might care if you were getting swindled by RTB’s supply-side platforms, which Digiday calls “the Bermuda Triangle of programmatic, where money mysteriously disappears.”

The biggest issue with real-time bidding is less with the people involved on both sides, and more about the technology between them. On the open marketplace, advertisers and publishers trade transparency for convenience, affordability, and access. Many are realizing that tradeoff isn’t worth it, and it’s beginning to show.

Big advertisers like Verizon, AT&T, and Enterprise have recently halted their spending on programmatic video ads served via YouTube. And, when Prohaska Consulting analyzed 6 supply-side platforms, they discovered spending on the open marketplace decreased by 10 percentage points between Q4 2015 and Q4 2016: 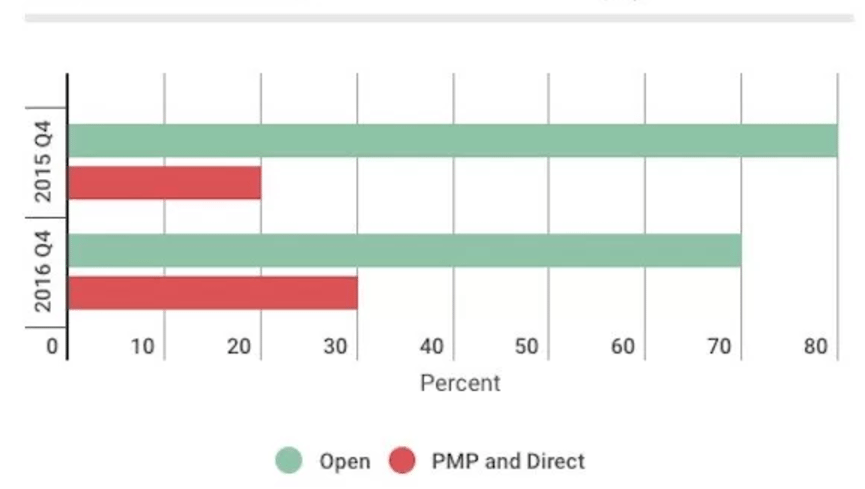 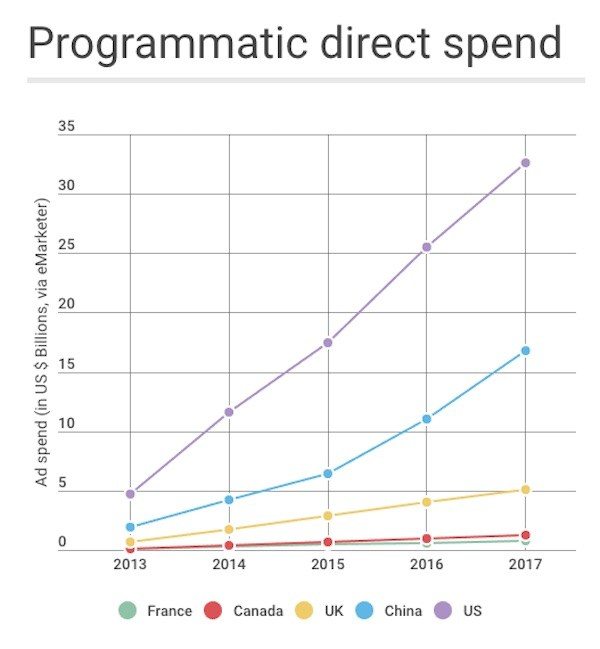 But programmatic direct isn’t ideal for all parties involved either. It’s transparent, but this method has similar issues to traditional media buying:

The good news is, data shows more publishers are starting to enable their advertisers to buy programmatic direct. Marketplace, OpenX, says it’s seen 4x more of its publishers use the method to sell ad space: 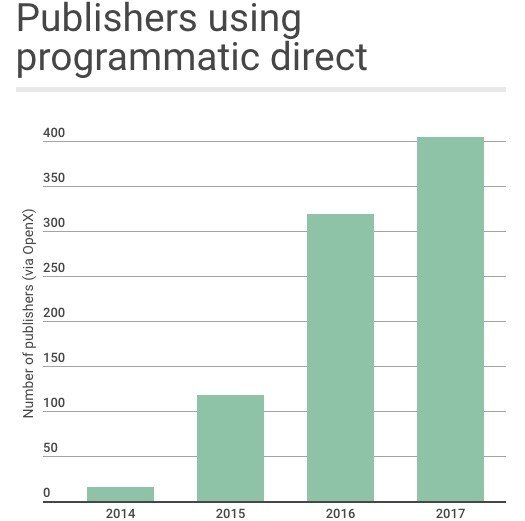 For those without the budget to afford programmatic direct, or an invite to a private RTB marketplace, there’s also good news: Steps are being taken to improve transparency in the open marketplace.

On the supply side, ad tech companies have proposed a new method called “post-trade programmatic,” in which advertisers get around 400 pieces of identifying data on their placements, compared to the normal 8-10. Included in this data would be information about where the ads ran.

Additionally, Google, the biggest broker of programmatic ad deals, has promised to crack down on ad placements in and near offensive content. And some even think the company may be willing to give advertisers access to more data previously kept private.

Programmatic marketing and advertising will only improve

This post shouldn’t deter you from investing in programmatic media buying. While some brands have taken issue with the method, much more have seen marked success using it.

Ultimately, the problem isn’t with programmatic advertising directly. Instead, it’s with the businesses and technologies that offer programmatic media buying.

To defend yourself from nefarious ad tech, arm yourself with as much knowledge as possible. Learn everything you can about an ad exchange before you invest in it, look out for newer buying methods like post-trade programmatic, and consistently review KPI reports to determine whether your ad dollars are being spent the way they should be.

To start capitalizing on the power of personalized advertising, sign up for an Instapage Enterprise demo today.