If you haven’t heard a lot about it, you’re not alone. Research released last week shows that two-thirds of brand professionals discovered outstream in the last year. In that same year, eMarketer found that 77% of agencies worldwide said the new format is going to be much more important to their clients’ futures.

So what’s all the fuss about?

What is outstream video?

You’ve probably seen outstream video before without realizing what you were looking at. The best description of the new ad units comes from the AppNexus team:

An ‘outstream’ video ad unit, also commonly referred to as ‘in-read’ or ‘native video’, is a new video advertising unit that autoplays in a large format player whenever a user navigates to it within text content (typically an article), even if the publisher doesn’t have their own video content. It’s called outstream because the video ad exists outside of online video content – also known as instream video content — where the ad plays either before (pre-roll), during (mid-roll), or after (post-roll) the publisher’s video content.

Here’s an example from In-View of what an outstream video ad looks like. Notice how the ad opens once a viewer scrolls down the page and then pauses once the player is almost out of view.

The rest of the definition varies depending on who you ask. Google says an outstream ad is “typically without sound. Outstream video types are Interstitials, Native, and In-Feed. The okay autoplay silent video on Facebook is a good example of outstream.”

But Mark Book, VP of Digitas Studios, disagrees.“What I do not consider to be outstream are placements within a feed – so Facebook, Instagram and BuzzFeed,” he said. “I consider this as pure native in-feed advertising.”

As such a new format, it’s not surprising there’s no universally accepted definition of it yet. What early adopters can agree on, however, is that outstream video brings major growth.

Why outstream video? Why now?

The “play” button is the most compelling call-to-action on the web. By 2019, online videos are expected to generate 15.4 billion in spend, and hog 80% of all internet traffic. The reason, Eric Wheeler says in a blog post for ClickZ, is video’s ability to “cut through the clutter and engage target audiences.”

Big publishers like Buzzfeed already generate more than 50% of their ad revenue from online video, and in two years, that number is expected to change to 75%. What’s also changing is how advertisers are going to buy video placements and show it to the audiences.

Up until fairly recently, if you wanted to run a video ad online, you had to do so before or during an actual video. That means publishers without video content couldn’t sell space for video ads. This limits the advertisers to run campaigns within video players on sites like YouTube. It also meant that viewers had to wait for the “skip” button to appear before they could watch a clip.

But now, with outstream, you can publish video ads in all kinds of content, like editorial pieces for example. You can also publish them natively, which works toward solving a problem that Google’s Paul Muret spoke about at the DoubleClick Leadership Summit in July:

If ads do not integrate well it can lead to ad blindness, or worse annoyance, and ad blocking. As an industry we need to come together and come up with a better experience.

The less-intrusive nature of these ads (you can scroll by them if you want), along with their expanded reach, makes them “far more valuable,” says Bertrand Quesada, CEO of outstream ad marketplace, Teads. “This is going to be as big as pre-roll advertising,” he added.

According to a report, he’s not the only one who thinks so.

Brands investing in digital are 42% more likely to agree that outstream will play a larger role in their advertising strategy than instream going forward. Additionally, 37% of brand professionals agree that outstream spending will outpace instream. A chart within the report reveals why.

For every objective, respondents say that outstream video offers more benefits than instream: 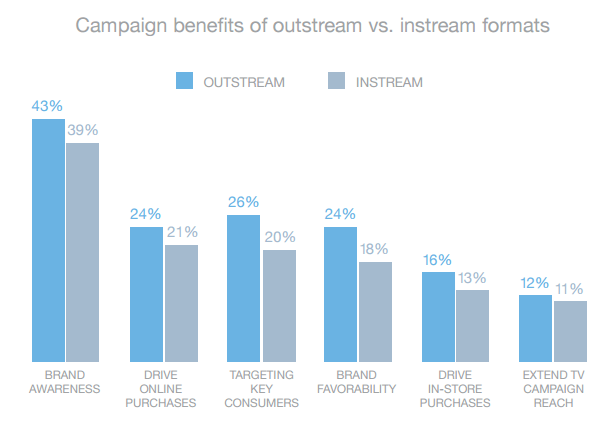 But are advertisers willing to pay for those benefits? Early reports say yes.

Virool’s Sonja Kristiansen, a native video ad marketplace, claims that publishers are selling outstream placements for a CPM as high as $45. This puts them in the same pricing category as pre-roll ads on YouTube and Hulu.

Who are those publishers? The Washington Post, Forbes, and CBS to name a few. So, should you buy into the hype?

The benefits of outstream video 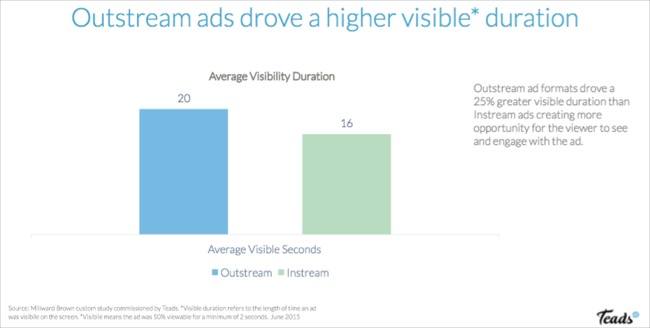 The disadvantages of outstream video ads

Teads, the inventor of outstream video, has launched an accreditation program for advertisers hoping to learn more about how to use the format most effectively. To get involved, start here. Then start creating post-click pages, request an Instapage Enterprise demo today.