Grazing the California sky at a height of over 360 feet, coastal Redwoods stand taller than any other living thing on the planet.

Now imagine for a moment how deep the roots of such monstrosities extend into the ground. Probably 200? 300? Maybe 400 feet?

It’s true, the secret to remaining upright as the world’s tallest organism has nothing to do with a Redwood’s individual roots. Instead, it’s the roots of the Redwood next to it that help each tree maintain balance.

Those roots, while only 5-6 feet deep, extend around 100 feet in each direction, intertwining with others to form a network of Redwoods that’s nearly untoppable by any force of nature.

Collaboration is powerful. And today’s workplaces are just beginning to scratch its surface.

Collaboration is powerful and today’s workplaces are just beginning to scratch its surface.

The future of work

Twenty years ago, to be productive, the prevailing belief was that you needed to occupy the same space as your entire team. Today, that’s not the case.

Work is no longer about “we’re doing it this way, here and now, because this is how it’s always been done.” Today businesses are rethinking traditional ideas surrounding productivity, focusing more on letting employees accomplish tasks when and where it’s best for them.

Whether it’s an open air office or the couch at home, a stand-up meeting or a virtual one, these are the systems and ideas shaping the future of today’s collaborative workplace.

The office is no longer the hub of productivity

In 2014, the Harvard Business Review published an interview that revealed the secret to higher employee productivity:

In a study that halved the staff of a call center and allowed one group to work from home for 9 months while requiring the other to remain in the office, Nicholas Bloom and James Liang found that remote workers were not only more productive, but they were happier and less likely to quit.

“The results we saw at Ctrip blew me away,” said Bloom. He elaborated:

“We found that people working from home completed 13.5% more calls than the staff in the office did—meaning that Ctrip got almost an extra workday a week out of them. They also quit at half the rate of people in the office—way beyond what we anticipated. And predictably, at-home workers reported much higher job satisfaction.”

The study’s authors attributed the boost in productivity to a quieter working environment and the fact that people tend to work more hours from home. Participants started earlier because they didn’t have to commute, they took shorter breaks, and they worked until the end of each day.

In addition to boosting productivity and employee happiness, Ctrip also managed to save over $17,000 in rental costs over the course of the 9-month experiment.

It’s no wonder social media powerhouse, Buffer, got rid of its office a few years ago, and HR influencers like Pam Ross are imploring businesses to scrap their work-from-home policy in favor of a “results oriented work environment” (ROWE) — a concept developed by Cali Ressler and Jody Thompson.

“In a ROWE, people manage their own time as well as where and how they work, as long as they get results. This type of work environment shuts down non-productive gossip (which Jody and Cali call "Sludge") about people leaving early, taking breaks or getting time off because of their family status. In a ROWE, there's no need for a "work from home" policy, because it doesn't matter where you work. Managers spend their time as a coach, developing their people, rather than managing the time people spend in their seats at work.”

Implement this type of system with caution, though. Bloom warns that it may not be ideal for all businesses and employees.

He recommends “exploiting natural opportunities” before you overhaul your workplace. In other words, measure productivity when staff is prevented from coming into the office — like on severe weather days, for example.

That way, before you make any changes to your employee rulebook, you’ll know whether scrapping your work-from-home policy will bring productivity benefits for sure.

“No one has time to meet,” say respondents of the Creative Group’s survey on the biggest challenges facing collaboration in the workplace.

Maybe that’s because the traditional “meeting” involves sitting around a table waiting for two employees who had to finish gossiping by the water cooler, one who stopped for coffee, and another who needed to use the restroom.

What’s worse, even if they make it to the meeting room, they’re not actually paying much attention. According to Atlassian, this is what the average meeting attendee looks like: 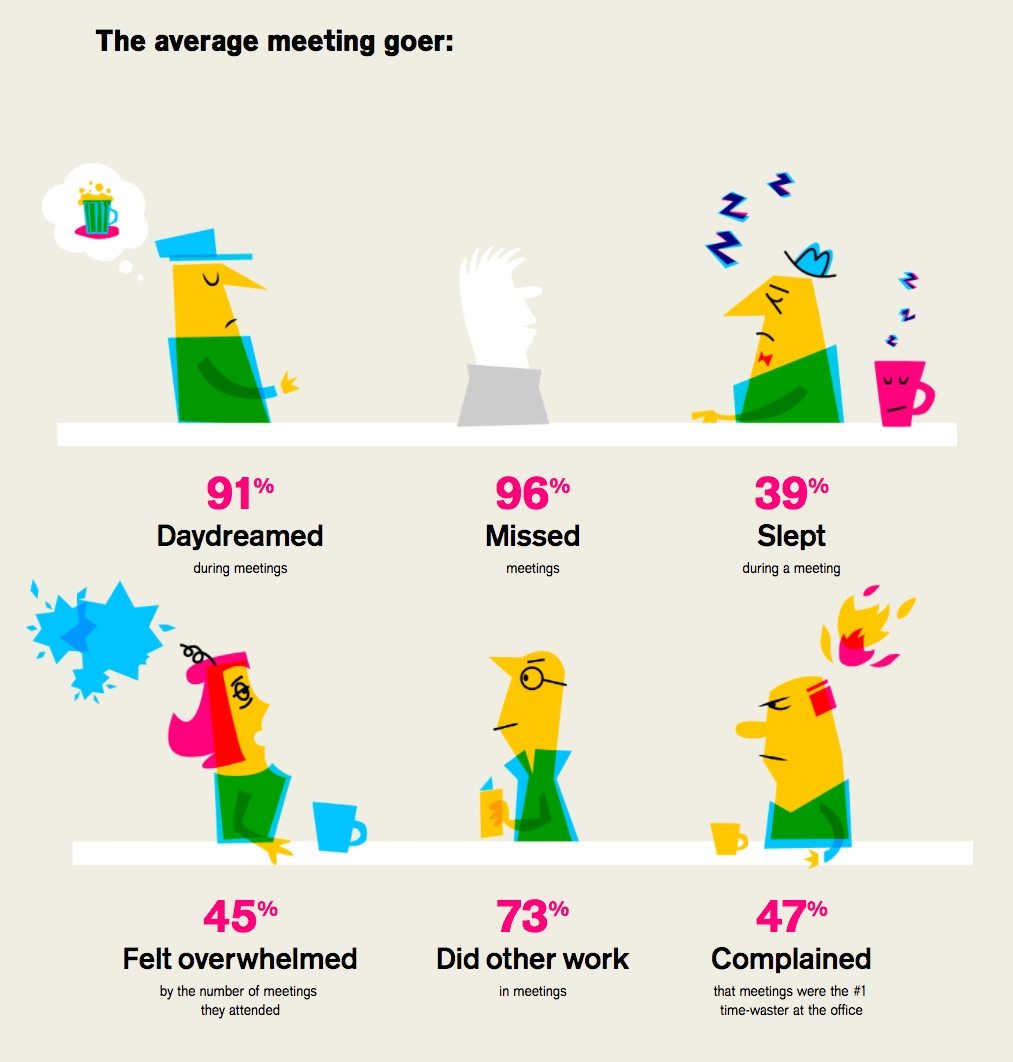 And the cost to businesses as a result? A staggering $37 billion.

That’s why more and more businesses are reimagining collaboration. Neal Taparia of Imagine Easy Solutions decided to remove chairs from his meetings, and this is what he found:

“Immediately I noticed that my meetings were shorter. For fun, I briefly tested the length of my meetings sitting vs. standing. Though not exactly a scientific experiment, I found my standing meetings lasted 36 minutes on average vs. 48 minutes sitting down.”

47% of workers complain that meetings were the #1 time-waster at the office.

Some, like Buffer (before they got rid of their workspace), even cut conference rooms out of the equation altogether, allowing team members to meet virtually via a video-conferencing software like Google Hangouts.

“With an office, if team members are in San Francisco it can be easy to delay meetings until all team members are in the office. The conclusion we came to is that we should always do the thing we can do immediately. If we need to have a meeting quickly and we’re not in the same place, we should jump onto a Hangout, even if we are in the same city.”

And then some solutions make it possible to forego meetings altogether — like the Instapage Collaboration Solution:

Now instead of meeting with your team to discuss post-click landing page design changes, or writing lengthy word docs filled with screenshots that include messy arrows and highlights, you can simply click your page to comment on an element and decide who to share it with. When you do, those people will be notified that they’ve been tagged, and they can edit the same post-click landing page.

No more money-wasting meetings and no more frustrating attempts at trying to get everyone’s schedule coordinated for a specific time. Set a deadline and let people work when they’re at their most productive.

This extends beyond ping pong tables, bean bag chairs, and beers in the fridge. There’s a happy medium between scrapping your work-from-home policy and confining people to a cubicle. Cisco calls it a “connected workplace.” 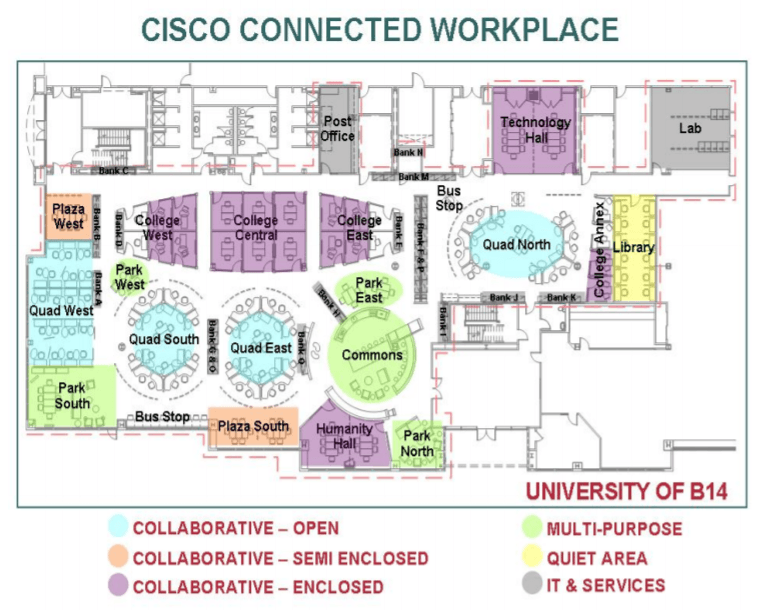 In a workspace like this, employees are encouraged to work where they feel most comfortable, whether that’s in an enclosed space like “Humanity Hall” or a multi-purpose area like the “Commons.” It’s a happy medium between a completely open workspace and a cubicle farm.

According to Cisco, the workspace has mostly increased efficiency and happiness, as employees like the ability to choose from a number of stations to work at. Not only that, but it’s saved the company money as well: 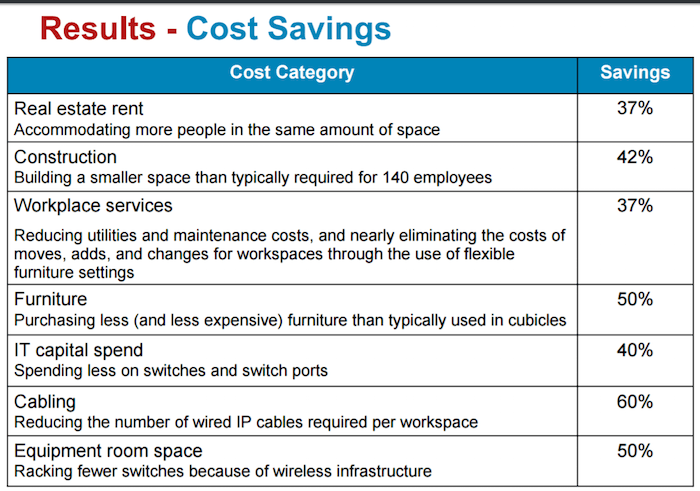 The results prove that employees can still be happy and productive at work, as long as they’re not constrained. If you’re not ready to completely rewrite your employee policy, consider offering your team a more open workspace.

Workplaces of the past were stuffy suit & tie environments with a strict hierarchy. Ideas came from the top down, and low-level workers were forced to implement them whether they liked them or not. But decades ago, a research experiment conducted by Lester Coch and John French Jr. found that method is flawed.

On a clothing factory floor, the two researchers discovered that lower level employees could not only improve a business with their ideas but team cohesiveness at the same time. Workers were more receptive to new processes when they came up with them on their own, as opposed to when they were ideated and enforced by management. They were also more productive after those new processes were put in place.

Today, Google’s “Aristotle Project” backs that research up. With observational data collected over several years, the company aimed to discover what makes productive and healthy teams. The results showed two traits shared by the best:

This isn’t to say there should be no difference between the outside world and your workplace. Some things don’t belong in an office, no matter how casual.

However, if eliminating some stricter policies and encouraging feedback can make your employees more comfortable, and that in turn can make them more successful, then aren’t you doing your business a disservice by not considering both?

What do you think the future of work looks like?

Has your employer made any of these adjustments? Do you love them? Hate them?

Start collaborating with your team using the most productive Instapage Collaboration Solution, sign-up for an Instapage Enterprise demo today.