Today’s lesson on persuasive marketing is brought to you by a writer, a waiter, and among others, a researcher in disguise.

Surprisingly, they can all teach you how to improve your post-click landing page design and overall marketing strategy with psychological principles proven to inspire action.

Those principles are called “reciprocity” and “authority,” and they’re two of ten that every marketer should take advantage of to boost ROI. To learn the other 8 principles of psychology that will give your post-click landing page a persuasive edge, download the new Instapage resource: 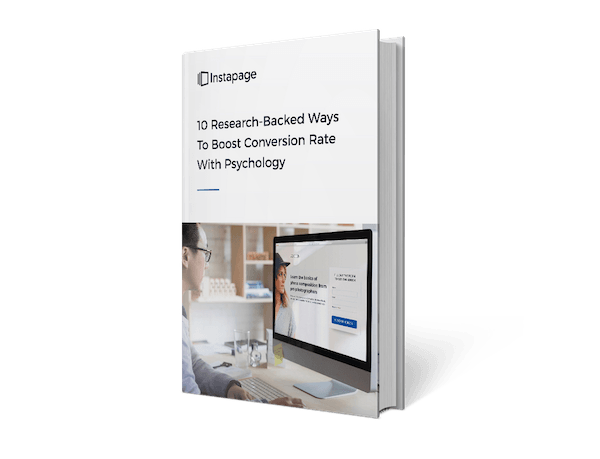 All the best marketers are part psychologist. They know what their prospects need, and how to give it to them with elements that mentally guide them toward conversion. Two psychological principles, authority and reciprocity, power some of those elements.

Reciprocity can generate goodwill for your business, and authority can boost the perceived value of your offer exponentially. Here’s how to use them both in your marketing strategy.

Copywriter Dean Rieck and his client have just finished a casual dinner out. When the bill arrives, Rieck’s guest snatches it quickly. “I’m happy to pick up the tab,” he says.

The copywriter accepts his client’s generosity, but reluctantly:

I do appreciate it, but something feels wrong. I can’t figure it out. I get free food, but I’m uneasy about something.

Two weeks later, I’ve forgotten all about it. But when the same client asks me to do something extra on a project — something not in our contract — I agree without thinking. He asks, and while I would usually refuse, I say, “Yes.”

Rieck has just been compelled by the power of reciprocity. Here’s how:

How the principle of reciprocity works

Whether they realize it or not, victims of reciprocity enter a social contract that makes it difficult for them to say “no” to a request. In the above example, Rick describes feeling “uneasy about something” after having his meal paid for, when there was seemingly no reason to.

Two weeks later, he discovered the reason for that feeling: He was indebted to his client for picking up the check, which made it harder for him to turn down extra work when that client requested it later.

In a nutshell, that’s reciprocity. It’s the “I owe you” feeling after someone does you a favor, which, more often than not, compels you to return that favor. And no one is immune to it.

Politicians routinely extend generosity knowing that it will someday be returned. Pharmaceutical representatives offer gifts to doctors knowing that it can convince them to prescribe a particular brand of medication.

As you’ll see, research shows there’s little the rule of reciprocity can’t accomplish. The “I owe you” feeling is so strong that it’s extremely difficult to resist, even if you don’t know the person you’ve entered the contract with.

The origin of reciprocity can be traced back thousands of years. Early on, before members of a society paid or bartered for goods, they relied on each other to share resources. The principle of reciprocity ensured that a generous act, like sharing food, would be repaid.

Since then, countless studies have reinforced the power of reciprocity. Here are a few:

In transactions both monetary and social, it’s clear reciprocity is powerful — but how do you incorporate it into your digital marketing strategy?

Using reciprocity in your digital marketing

To put yourself in a position to benefit from the rule of reciprocity, you have to give before you get. Some ways to incorporate the principle into your marketing strategy:

To reap maximum benefits from the rule of reciprocity:

1. Ask soon after gifting. The urge to repay a debt is strongest is immediately following the act of generosity.

2. Make the gift relevant. One study showed that fast food patrons were more likely to overspend when they were given a free sample of yogurt compared to a free keychain before their meal. The reason is simple: They’re in a restaurant because they’re hungry. The personalized, relevant gift engages a more “muscular version” of reciprocity, says Cialdini.

3. Give more to get more. In the tipping experiment, one piece of candy brought a 3% increase in tips compared to none, but two pieces brought a 14% increase. The more you give, it shows, the more you’re likely to get.

4. Make the gift unexpected. In the same tipping experiment, while two pieces of candy brought a tip increase of 14%, the “1+1” condition (in which waiters gifted one mint, then returned to gift another to “such a great table”) produced an increase of 21%. The reason was the unexpectedness of the tip.

Keep in mind, reciprocity can work both ways. Other research on the principle shows that people will take “two eyes for an eye,” so ensure you give more than you take.

Would you inflict pain on a stranger if a doctor told you to? In 1963, researcher Stanley Milgram aimed to find out in what’s become maybe the most widely known experiment of all time. It was set up like this:

By the end, nearly two-thirds of subjects delivered a 450-volt shock to the man (labeled on the switchboard as “danger — severe shock”), regardless of how much pain he was seemingly in. All participants administered a shock of 300 volts.

Milgram wrote about the results in a paper titled The Perils of Obedience:

The reason so many people were willing to harm a complete stranger? From the researcher himself: The authority principle.

How the principle of authority works

We’re raised from a young age to respect authority. Parents, teachers, and doctors are among those whose orders we’re taught to comply with, usually because they’re well-trained figures with good intentions.

That’s why, in the experiment, so few subjects disobeyed the order to administer even a fatal shock. Milgram claimed these people were in something called the “agentic state,” as opposed to the “autonomous state,” in which people are in control of their own actions. The agentic state is defined as:

“A state of mind in which a person will allow other people to direct their behaviors and pass responsibility for the consequences of the behaviors to the person telling them what to do.”

For people to enter the agentic state, two conditions have to be present:

1. The person giving the orders must be perceived to be qualified to direct other people’s behavior.

2. The person being ordered about is able to believe that the authority will accept responsibility for what happens.

One of those is crucial to using authority in marketing to get people to take action.

When people evaluate an offer or piece of marketing collateral, the “who” it’s associated with can, in many cases, be more important than what it is. Rieck explains:

“Which diet will take off those extra pounds? Well, here’s a nationally-recognized weight-loss authority who says she has the answer. She’s got a doctorate in nutrition. She dresses in exercise gear. And her books and tapes are in every bookstore. Titles, clothes, and trappings. Sure, we’ll give it a whirl.”

“Titles, clothes, and trappings” refers to the Robert Cialdini’s three indicators of authority, which people use to meet Milgram’s first condition for entering the agentic state:

By using all three, you can demonstrate to prospects that you’re qualified to dictate their behavior. Let’s take a look at some examples from a few post-click landing pages. 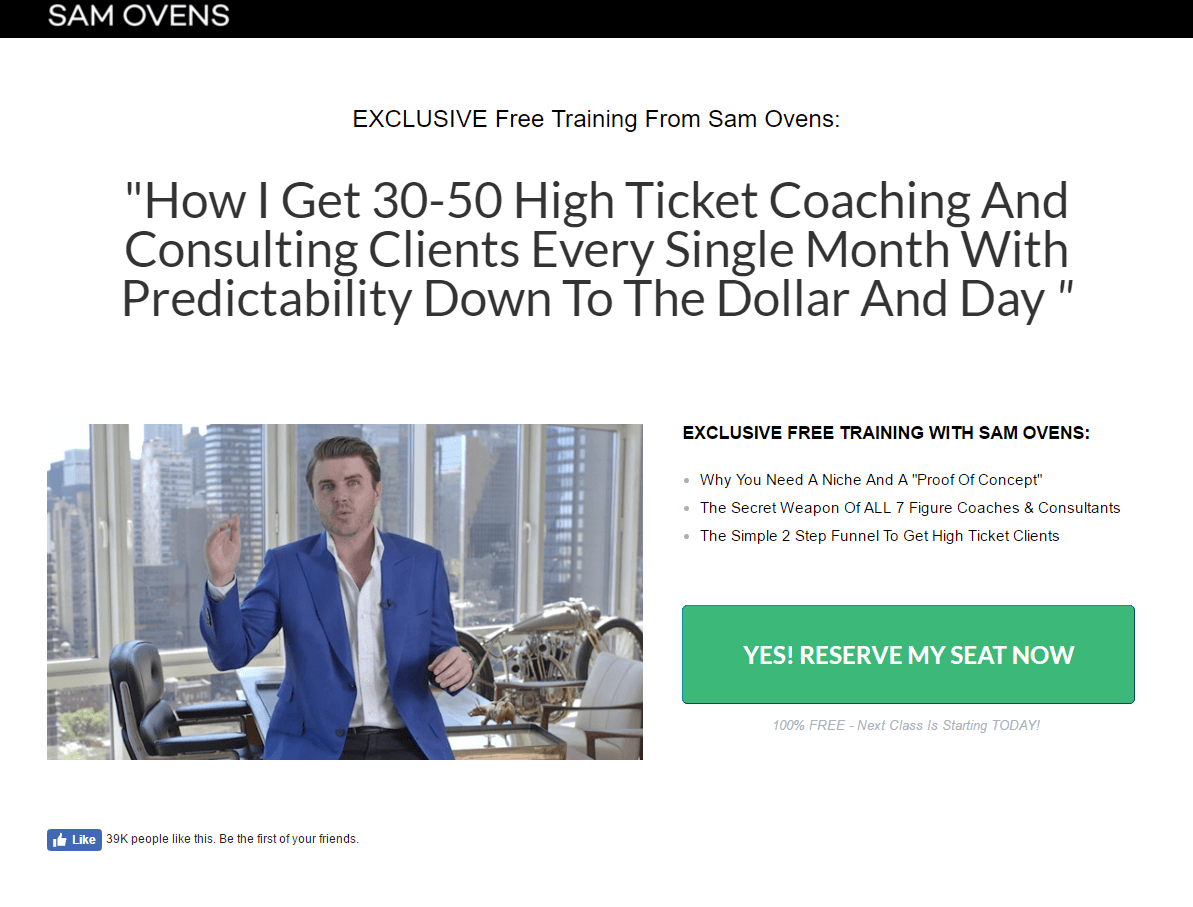 Sam Ovens claims he can get you high-ticket coaching and consulting clients. Does it look like he can? To us, the answer’s “yes.”

He’s wearing what looks to be an expensive outfit, sitting on a wooden desk that’s surrounded by high-value design accessories (leather chairs, gold paperweights, and… is that an antique motorcycle in the background?).

Look out those windows and you’ll notice that Sam’s office features not only a beautiful view, but a beautiful view among skyscrapers, which means he’s in a major city. And that means his office is likely mighty expensive to maintain. 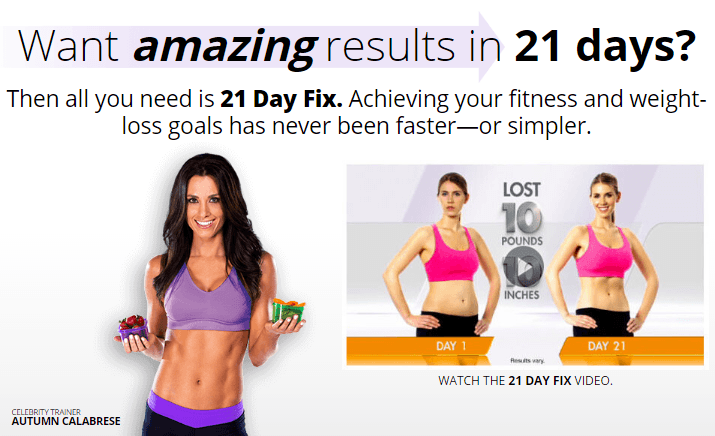 Celebrity trainer Autumn Calabrese is the face of Beach Body’s 21-Day Fix program. By evaluating her authority, prospects can determine she’s capable of whipping them into shape.

First, she’s dressed the part — in workout clothing. It makes her look like a trainer right off the bat. Second, that workout attire has been chosen to specifically showcase her midriff, which is flat and toned — a fit look many aspire to. Third, she’s holding two containers full of healthy food, which subtly indicates she knows what to eat to achieve her aesthetic. 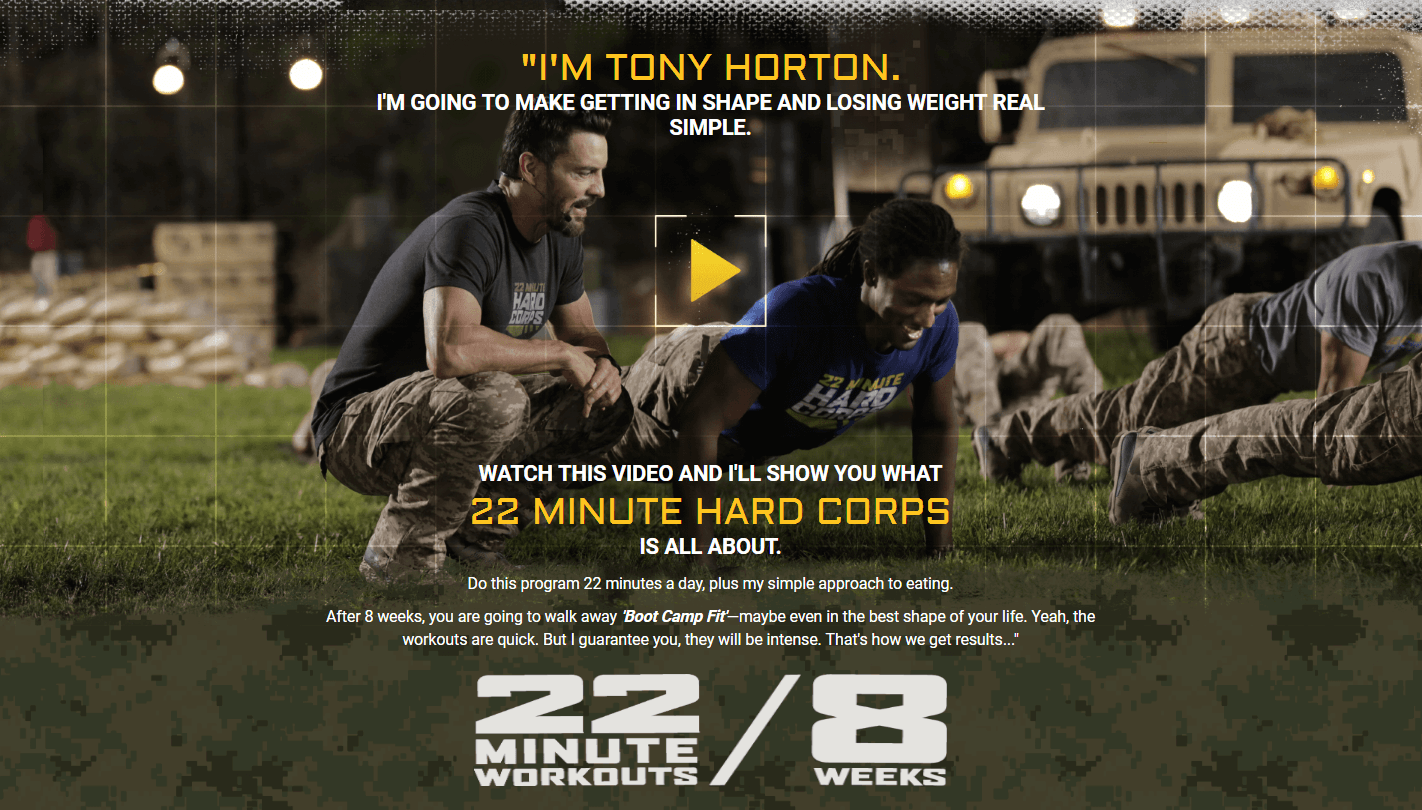 Here’s another Beach Body program, the 22-Minute Hard Corps, led by trainer Tony Horton. His authority appeals to a more intense audience, as indicated by his army fatigues and more muscular physique (not to mention the name of the program “Hard Corps”). It shows him squatting in the grass, leading a workout of at least four people. His position above them subtly signals he’s in charge and that he’s able to discipline prospects into getting fit.

But are looks everything?

Titles, clothing, and accessories can help a prospect determine whether someone is qualified to offer their product or service — but it’s not always enough. Before visitors download or sign up or buy, many times they need an additional indicator, like credibility.

Credibility is like authority’s more accomplished sibling. Authority talks the talk, but credibility walks the walk. A definition:

Credibility refers to the believability and reliability of information received from outside sources. When assessing the credibility of a source, it is necessary to evaluate the trustworthiness and expertise of the person or persons providing this information.

Achieving credibility comes down to proving knowledge and expertise. Your prospects will ask:

With a few marketing techniques, you can assure your prospects of both. To demonstrate expertise, list your qualifications, your education (if applicable), where you’ve been featured, who you have worked with, and awards you’ve won.

Here’s another example, courtesy of Logical Position, which showcases awards to prove expertise:

Here’s one last example from a content marketing agency, Louder.Online:

As far as credibility is concerned, demonstrating your trustworthiness is a little more difficult. When you tell them that they should claim your product because it’s “the best in the world” or “the most powerful on the market,” they’ll doubt you because you have a stake in the outcome.

That means, the less reason you have for recommending a product or service, the more persuasive you become. Dean Rieck offers another example:

If you’re writing a letter to raise funds for a conservative cause, imagine how powerful it could be to have a liberal delivering the message. If a liberal buys into the idea, it must be convincing!

If you can’t personally separate yourself from your offer, it’s still possible to convince prospects that it’s as good as you say it is. To achieve trustworthiness, you’ll need help from social proof.

To learn how to use social proof, and 9 other psychological principles to boost conversions, download the new Instapage resource here.

Boost conversions with psychological principles of advertising and marketing

Do you use reciprocity and authority in your marketing? Which psychological principles do you use to boost conversions?

Let us know in the comments, then create a post-click landing page that converts with the help of psychology and 100% customizable templates from Instapage.

Show Me the Marketing Psychology Guide