Mid Roll Ads: What are They & How Can You Use Them Most Effectively?

There are many possibilities and if you spend a significant amount of time watching online videos, you’ll notice there are ways to insert ads correctly that won’t turn away the viewing audience. In this article, we’ll define what a mid roll ad is, how they’re used, and what should know to execute them effectively.

What are automatic mid-roll ads?

Mid-roll advertising refers to a video ad that plays in the middle of content, rather than before or after the publisher’s video content. If you advertise on YouTube, Facebook, or another platform, you may want to consider how they could work for your digital campaigns.

Mid roll ad adoption was slow at first and subject to some criticism, but in recent years they’ve gained widespread usage on YouTube, Facebook, and other platforms. This new, once-shunned format quietly surpassed pre-roll ads for completion rates, with 90% of them being watched through to completion. The nature of a mid roll ad lends itself to a variety of higher quality viewer experiences, and shouldn’t be overlooked:

Automatic placements are ads that have been placed by Google’s algorithm based on its determination that most people will watch more of the ad at that particular spot. As machine learning becomes more effective, more and more creators will begin to lean on these automatic placements, but for now many continue to select manually, as it allows them to creatively insert the ads in an announced or planned break in their content.

As an advertiser, it’s good practice to consider the possible placement of your ad at every step of creation and messaging. If you’re highly selective in your placements, identify the channels that offer mid roll, and where they do so. As with other ads, keeping the ad engaging and concise is usually good practice, and this is particularly true since mid-rolls are placed in the middle of content.

Automatic mid roll and the trouble of proper placements

It shouldn’t surprise you that YouTube is the most popular platform to see mid-roll ads implemented properly, given its status as the most viewed video platform in the world. Although Facebook is slowly catching up in some respects, their implementation has been lackluster at best for advertisers.

According to Facebook’s help center, their In-Stream ads are slowly gaining traction with both publishers and advertisers. However, it appears the injection of an advertisement on a livestream-based platform like Facebook is having trouble finding footing with viewers.

The difficulty Facebook has had points to a larger difficulty with this format – mid roll ads outperform their pre roll counterparts or other kinds of YouTube ads because they have the potential to feel more naturally placed, less intrusive, and more relevant to the viewer. But not all of them do this. Because of the potential for this format to interrupt the viewer experience, some publishers and platforms steer away from them.

When running YouTube ads, advertisers pay for in-stream video on a CPM (cost per impression/view) basis through Google Ads. This means you’ll only pay for ads that are counted as a view, and have promoted some level of brand awareness with viewers. Google Ads gives you control over your bids, placements, and strategy, so that with proper setup and consideration you’ll never worry about overspending your budget.

Mid-roll YouTube ads are both mobile and desktop friendly, so there’s no need to concern yourself with device specifics. Always ensure you’re complying with the standard video best practices, like using the proper quality of audio and video for your channel of distribution, and making sure your content is in compliance with YouTube, Facebook, or your preferred platform’s guidelines.

Additionally, ensure you’re considering the unique attributes and context for mid roll ads. For example, YouTube offers mid-roll ads be skippable or unskippable — your choice depending on the video placements, audience, and goals you have in mind:

To learn more about the specs of different ad types across the most popular ad platforms, check out the Instapage digital advertising reference guide.

A good mid roll ad is one that is viewed in its entirety. If done poorly, they can prompt strong negative reactions from viewers who are frustrated by the interruption. Don’t let that scare you away; just make it your mission to understand what the differences are between the best and the worst. Offensive, obnoxious, or otherwise jarring advertising have typically been bad online advertising practice, and this is doubly true for mid roll.

Here are some best practices to get you started:

Google has become much smarter about how they implement automatic mid roll ads. Creators are welcome to switch this feature on and trust that Google will show their viewers ads that are relevant, semi-relevant, or at the very least inoffensive to their user base. Part of this consideration is automatically placing ads in locations the viewer will likely continue watching after the ad plays.

In the case of Michael McCrudden’s video below, the yellow line is the “break” where the mid-roll ad will play: 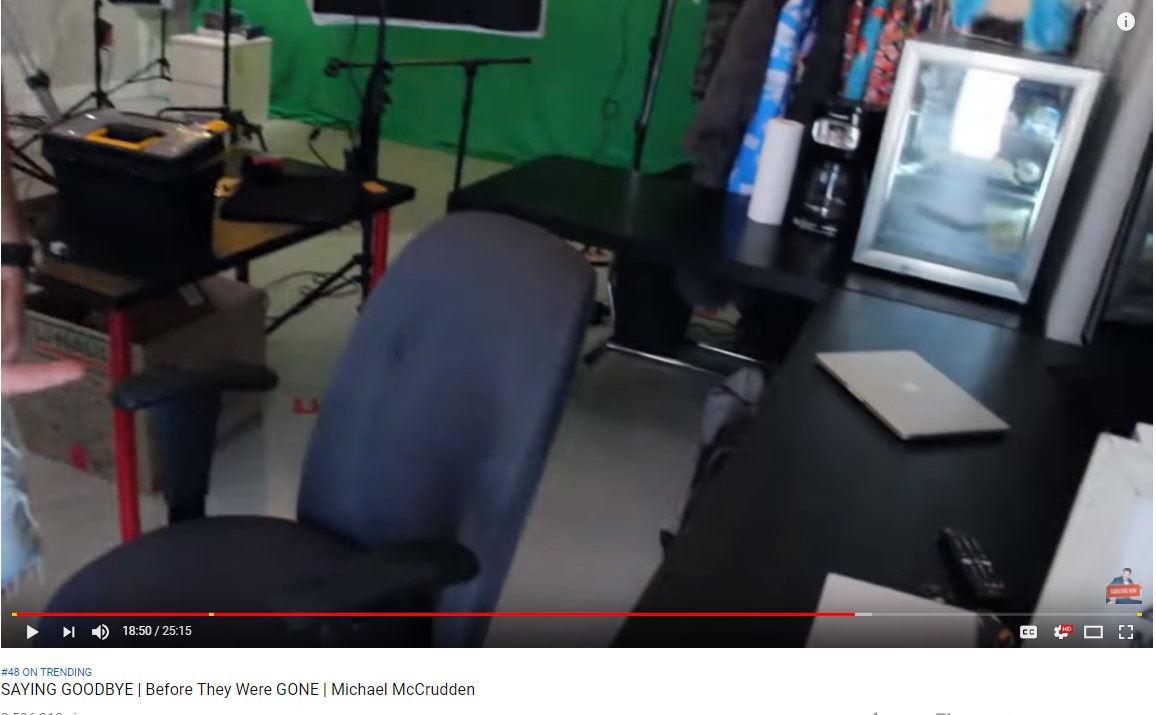 In some cases, when the author of the content elects to use automatic ad breaks, YouTube will elect to show a mid-roll video ad or another ad during this time, depending on user engagement. So if you want more control over your mid-roll ad placement, use manual ad breaks.

2. Make the ad match the content, the audience, or both

As YouTube slowly continues unveiling more and more of their analytics and advertising tools, the ads viewers see become more and more relevant with advanced targeting. However, many considerations for advertisers exist regarding which content they want their ads displayed on. Depending on your market and your target audience, you may wish to target certain videos or publishers directly, or exclude some content altogether.

Grammarly does a great job placing their ad on the Life Hacks video below. The advertisement appeared halfway through and their ad placement is right in line with their value offer: 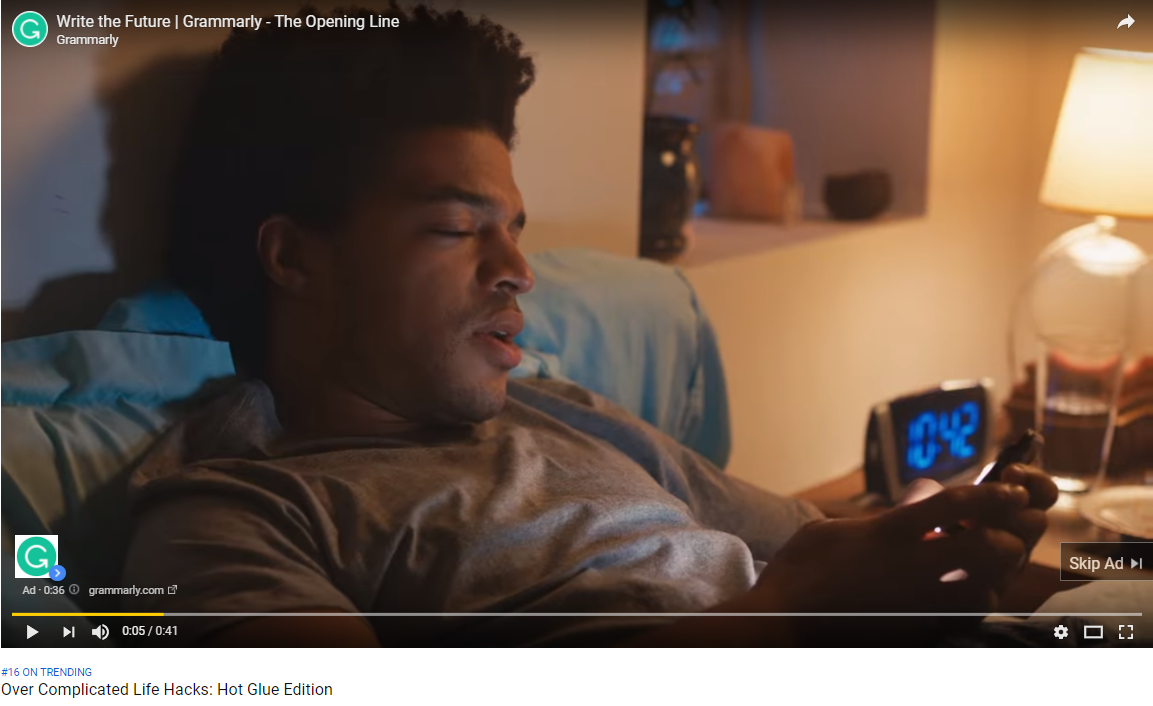 When you create an in-stream ad, you have the option of creating non-skippable ads if the ad is less than 15 to 20 seconds. Though it may sound appealing to get more eyes on your video, it is worth considering the objective of your campaign and perhaps disabling this feature.

Promoting brand awareness is often the objective of a video campaign, however, advertisers should be aware of the context their ads are shown to ensure that brand awareness is introduced positively. Think about how you want someone to be introduced to your brand. Would you want them to be interrupted, mid-engagement with other content, and unable to skip the message? That would leave a bad taste in anyone’s mouth.

Moreover, since your goal is to at least generate brand awareness, the five seconds before a user can skip an ad is plenty of time to make a positive impression on a viewer. The next time they see your ad, they’ll be more likely to watch it in full and take your desired action. Above all, you don’t want to turn away prospects who may convert for you later. Non-skippable ads have their place, just give them careful thought before implementing.

As with any digital ad, ensuring that it is helpful and noninvasive is priority one. When you align your message, the ad’s content, the placement, and timing with which you reach the proper audience, you set yourself up for success.

To get more information on how to align all these moving parts and make the best ads possible for every major ad platform, check out the ad specs guide.