The average online user is exposed to anywhere from 6,000 to 10,000 ads every day. And volume isn’t the only problem. Ads are becoming increasingly pervasive, obnoxious, and inescapable, as users are being bombarded with irrelevant offers, popups, and embarrassing autoplay videos.

Even if the top three motivations for ad-blocking include “Too many ads”, “Ads are annoying or irrelevant”, and “Ads are too intrusive”–the good news is, consumers don’t hate all ads:

So, it’s crucial marketers distinguish between intrusive vs. non-intrusive advertising.

What is intrusive advertising?

Intrusive advertising refers to pushing invasive, unwelcomed, irrelevant ads in front of consumers. They pop up unexpectedly, block the host page, flash annoyingly, open new pages and windows, or play video and audio at inopportune times. Naturally, this upsets and turns users off to your offer and brand, meaning your campaign fails from the start.

Research has found that both desktop and mobile users find the following ad types some of most intrusive:

Popup ads are most resented with a 73% disapproval rating.

81% of internet users have closed a web page because of a popup, primarily because they don’t like being forced to close ads. In fact, 89% complain that popup ads that require clicking the “X” to remove are extremely frustrating: 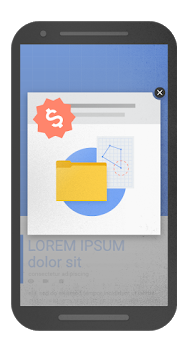 These are a close second to popups, with 70% of users disliking them, likely because the small screen size heightens the intrusiveness.

One intrusive advertising example on mobile is
interstitial ads which are interactive, full-screen ads that cover the interface of their host app or site. Although they usually appear at natural transition points or breaks between content (e.g. in between game levels), their full-coverage is what makes them intrusive: 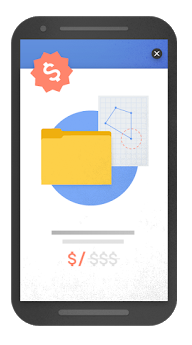 In third place with 57% disapproval are prestitial video ads–online video ads that play before other video content loads. Other research even shows this as the most disliked form of advertising because it makes people feel forced into viewing your ad.

For example, YouTube non-skippable video ads, and even ads that are skippable after 5 seconds:

eMarketer recently discovered that two-thirds of survey respondents thought autoplay video ads with sound were the most annoying type of online ad, followed by autoplay videos without sound at 55%: 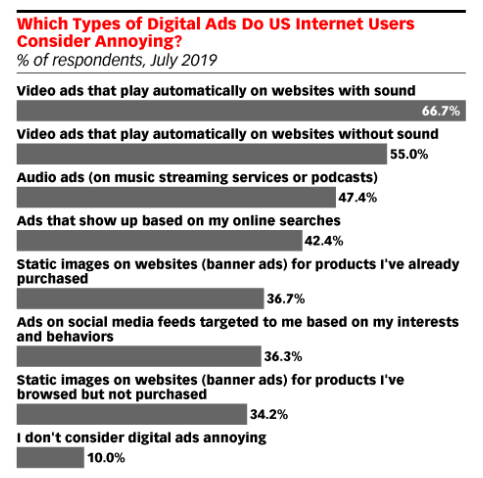 Unlike intrusive ads, non-intrusive ads don’t overtly disrupt a user’s online experience. They are passive, allowing the consumer to come to them rather than forcing themselves upon consumers. So, there’s no need to block them since they can easily be ignored.

Another intrusive advertising risk is that ads are frequently irrelevant to the site they’re found, failing to gather visitor interest. Conversely, non-intrusive marketing is well-thought-out, and ads are intelligently placed on sites to attract user attention.

If someone is reading an article about cars, and a Honda dealership ad is shown, there might be some user intent present. If they’re reading an ad about party planning, and the same Honda ad is shown–zero intent.

Given these disadvantages of intrusive advertising and the low tolerance for ads that disrupt the user experience, non-intrusive units should be a high priority. Consider a different approach:

Here’s a closer look at how to do this…

How to avoid intrusive advertising

The following methods allow businesses to demonstrate a great balance between growing brand awareness and leaving a positive impression on users:

When paid search advertising is done right (with intent-based keywords, etc.), it’s inbound, non-intrusive marketing. The user inquired first, rather than the brand reaching out and interrupting the user experience. Paid search ads target specific search queries, they reach people with high intent who were already searching for a solution like yours–not just people arbitrarily surfing the web.

Someone searching Google for a “content marketing consultant” wouldn’t be irritated if they saw this ad:

When the prospect clicks the ad, they’re brought to a dedicated landing page where they can learn more about the offer:

Not only do consumers have complete control over the ads they see and engage with, but converting on the offer, too.

For example, social media display ads use demographics and interests to target and attract people who show interest in your product or service and may have already made some connection to your brand.

Here’s a non-intrusive ad example from Morgan Stanely because it doesn’t interrupt the user experience on NYTimes.com, and it’s highly relevant after recently visiting and interacting with the Morgan Stanley website:

Retargeting isn’t the only way to increase relevance and reduce intrusiveness, though. Contextual ads on web pages based on the content of those pages (rather than past behavior) are equally important.

For example, a flood insurance ad on Weather.com is highly contextual: 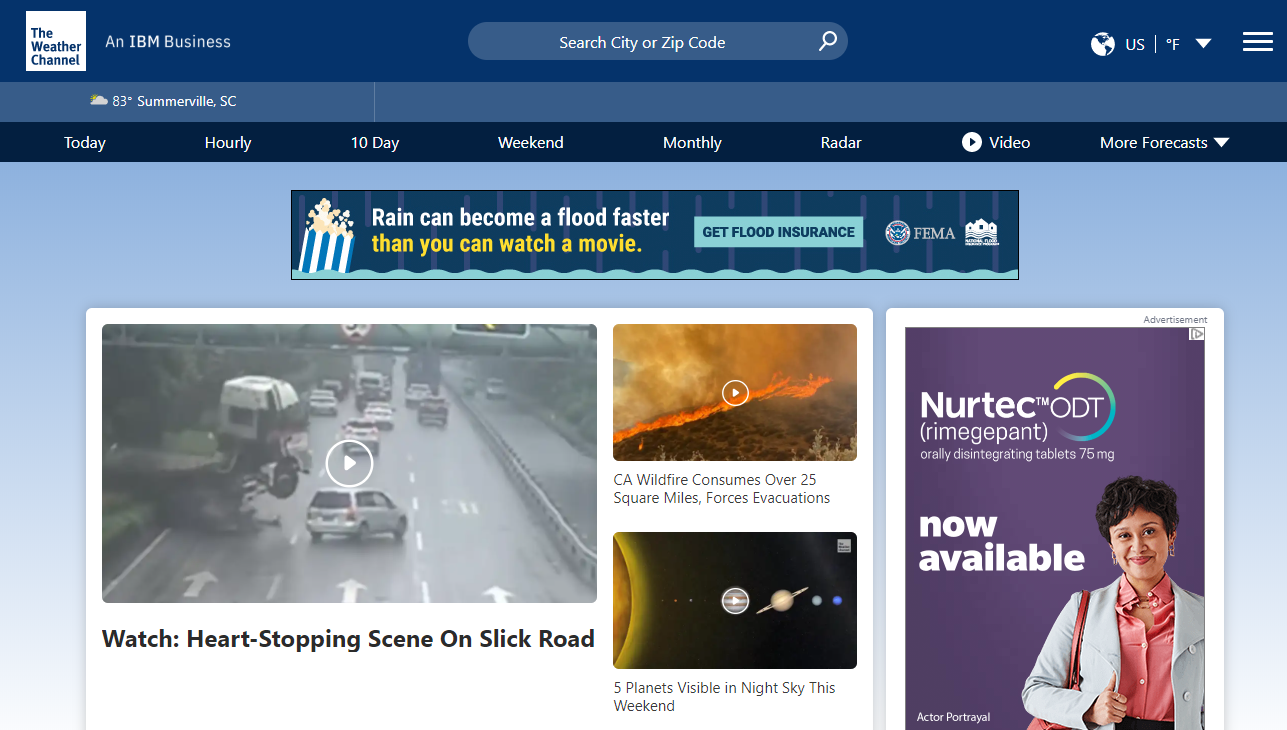 Visitors are already on the site to read about weather-related content, so it makes sense that an offer also about weather would attract their attention.

Native ads match the look and feel of the platform they appear on, making them less disruptive than other ad formats. They can exist on the open web, among related content, for example:

The paid, sponsored articles appear with the other Adweek articles, making them native to the look and format of the site.

Most social media advertising is also native. For example, image and outstream video ads directly within the Facebook feed are native because they blend in with the rest of the content– especially this one because it’s a retargeting ad as well: 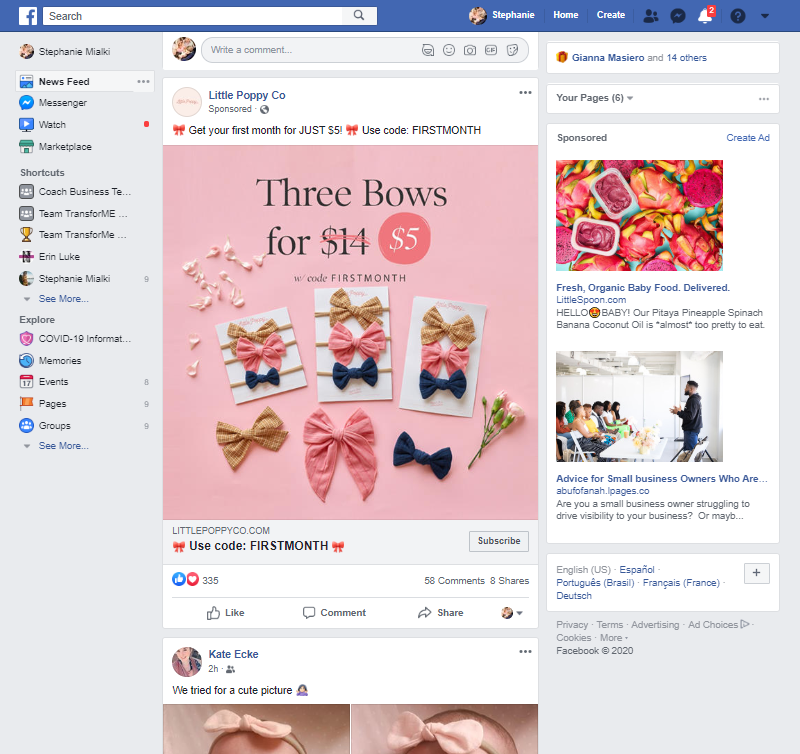 The only difference between the ad and the other posts in the feed is that the ad says “Sponsored,” but that’s not a disruption to the user experience.

When consumers opt into a company’s digital newsletters and promotional emails, email ads are considered non-intrusive. Users have granted permission for the brand to enter the inbox, and consumers can still choose to read or ignore them. They even include the option to unsubscribe completely, so the individual has full control.

Even without opting in or subscribing, email ads may still be considered non-intrusive if they are relevant to a user’s previous online behavior.

Don’t fall victim to ad fatigue, and even worse, don’t subject your ads to being blocked. Rather than pushing intrusive ads to uninterested users, balance both the need for more brand awareness and delivering an excellent impression.

To see how Instapage can help you create and scale the best non-intrusive campaign from ad to post-click landing page, request an Enterprise demo today.