Facebook’s new powerful advertising tool might have you feeling like you’re in a sci-fi movie, but we assure you — robot customer service reps are very real.

These “chatbots” were unveiled earlier this year at the social network’s F8 conference as the newest way for brands to engage with the more than 1 billion people who use Facebook’s messenger platform. (More on that announcement here.)

While initially they were restricted from sharing any kind of promotional content, Facebook representatives recently announced that’s changing — which means it’s time to reevaluate your bot marketing strategy.

Like we have many times before with Facebook’s other advertising offerings — mobile lead ads, Instant Articles, Canvas ads, — it’s time to ask the unavoidable question: Is it worth it?

The concept of customer service bots is nothing new. Most of us are familiar with helpful AI that come built-in to our devices, like Microsoft’s Cortana and Apple’s Siri. Some of us are even old enough to remember chatting with SmarterChild, the AIM/MSN bot developed more than a decade ago: 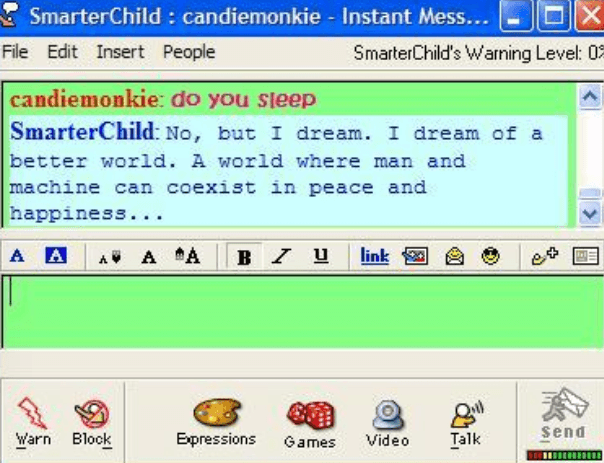 At the time, SmarterChild’s ability to forecast the weather and share movie listings was impressive — but it pales in comparison to what chatbots can do today. As a result of technological advancements made in the last decade, bots can better understand natural conversation and actually learn from the people they talk to.

Brands can’t help but see this as an opportunity to automate a lot of basic customer interactions on the web. Since some experts predict messenger apps could surpass the popularity of social networking sites in the near future (around 2.5 billion people use at least one messaging app, and by 2018 that could grow to 3.6 billion), chatbots have begun making a comeback in recent years, starting out east.

“U.S. companies are tapping into the popularity of chatbots in Asia, where messaging services such as WeChat help users schedule doctor’s appointments, shop for shoes, play games or the lottery and send money to friends, all from within the app,” says Jessica Guynn of USA Today.

Looking to follow WeChat’s lead, services like KiK, Slack, and Telegram have enabled brands to create bots on their platform within the last year.

In Facebook’s Messenger app, six months ago you could chat strictly with friends and family. Today you can strike up a conversation with a bot, and by the end, have pizza, news, a ride — and now, even promotional content delivered to you.

Not all bots are created equal. While WeChat has become a haven for them, some point out that many of the chatbots on the service are very limited in what they can do — with many operating like an automated phone operator: “Press 1 for business hours” or “Reply 2 to get directions to our storefront.”

On Facebook, there are plenty of brands that have developed simple bots like this, but ultimately the network’s aim is to allow for the development of more robust ones that can answer open-ended questions like “Where can I go for $500?” (Kayak) 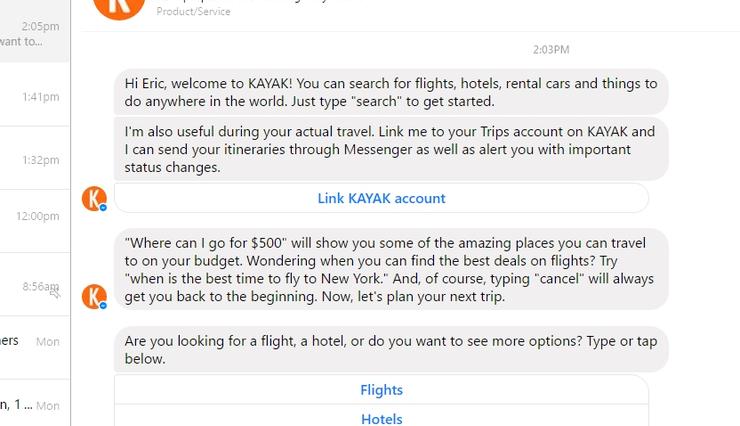 Of course, bots don’t have to be this sophisticated. They simply have to serve the purpose they were intended to — which in many cases is quite basic. 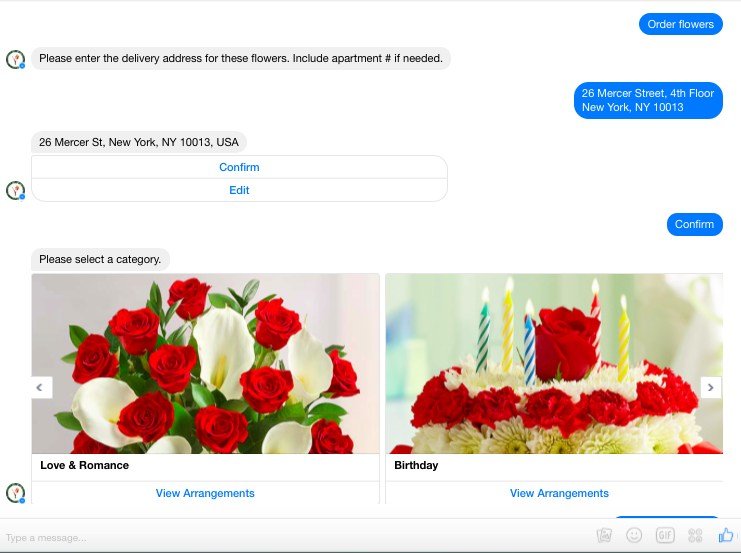 So far, the biggest challenge for brands has been trying to provide value while also adhering to Facebook’s guidelines for bots.

Messenger’s latest update allows chatbots that once could only deliver news to send promotional content — but with a catch: the user needs to start the interaction, and that content needs to be sent within 24 hours. 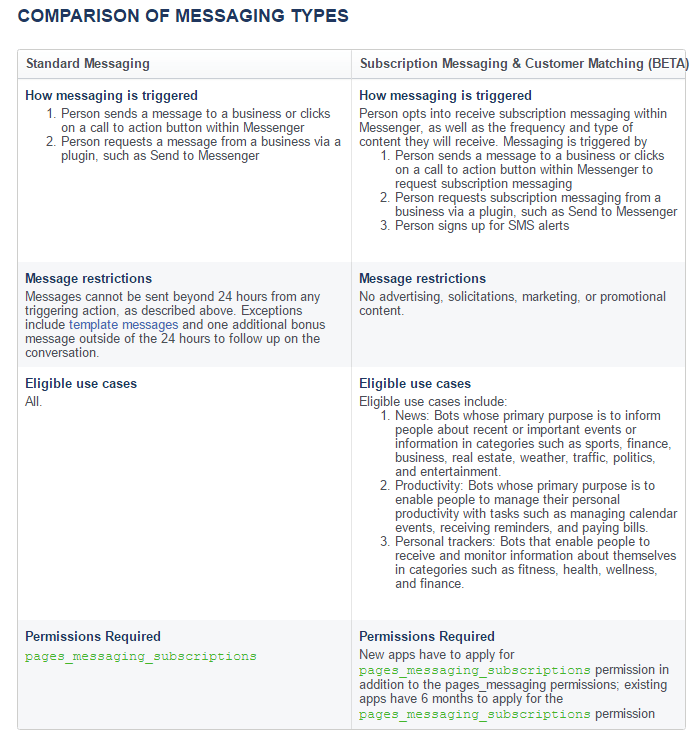 Up to this point, though, few chatbots have been able to offer truly useful and personalized experiences like Kayak’s, the goal of which is “to put a travel agent inside your pocket.” Bots with a high level of sophistication require heavy technical knowledge, and in some cases, an around-the-clock team to maintain.

Still, brands from all industries are working toward a future in which chatbots can handle customer service requests of all kinds, so far with varying levels of success.

Barack Obama’s chatbot, developed to allow Facebook users to send the president a message was called an “epic fail” by VentureBeat’s John Brandon, who added that it was nothing more than “a glorified form.” What’s worse, is that “form” asks for personal information that is no way guaranteed secure. In another piece for Computerworld, he goes so far as to call it “a security nightmare for you that could prove to be the worst thing Facebook has done in their existence to betray user privacy.”

But a higher level of bot intelligence comes with its own problems. Earlier this year Microsoft had to apologize for tay.ai, a chatbot with machine learning capabilities that learned to spout off racist commentary from conversations with Twitter users.

Should concerns like these keep you from developing your own chatbot?

The pros and cons of chatbots

While some people say this will be “the year of the chatbot,” others aren’t so sure, pointing out that they’ve gotten off to a rough start. In a Medium post earlier this month, Kik CEO Ted Livingston reflected on the first four months of the chatbot revolution that can be summed up in one sentence: “This is not yet the world that the early hype promised.”

So, should you jump on the bandwagon by developing your own? Or are chatbots just a passing marketing fad?

Why you should develop your own chatbot

1. Your customers are lazy

If there’s one thing you can always count on, it’s people’s inherent laziness. We want things done for us quickly and on command. When built correctly, chatbots can take eliminate the legwork from nearly any process to fulfill requests on behalf of users.

People are going in on chatbots, and not just a few. In less than six months since Facebook bots were made available for development, 18,000 have been launched by brands of all sizes.

As mentioned earlier, some experts suspect messenger apps will overtake social networking sites as the most-used platforms on the web in just a few years.

4. Early adopters have seen some success

While there haven’t been many reports of ROI from early adopters, 1-800 Flowers reports that 70% of their new customers have been generated through chat. Additionally, video game franchise Call of Duty used chat to exchange nearly 6 million messages with eager gamers awaiting a release in just the first 24 hours it was online; and the NBA’s bot generated 350,000 interactions during the league finals.

When done right, there are few techniques more powerful than personalization. Brands like Sephora have used quizzes via bots to gain deeper insight into their fans, and offer more relevant content tailored to each.

Nearly half of all people say they would rather contact a business through messaging than email. It’s not enough that you list a support email on your website and get back to requests within a few days. Today your customers want help via messenger, and they want it immediately.

51 percent of people say that a business needs to be available 24 hours a day, 7 days a week. Unless you have support team fielding phone calls in every time zone, chatbots make this type of accessibility a reality.

Why you may want to think twice

1. Do you have the resources?

Currently, developing a bot isn’t so easy that anyone can do it. You’ll need specialized help, which can cost you. Additionally, will you need a small team to manage out-of-the-box requests? Even a small staff like that will cost you extra.

2. Can you invest the time needed to do it right?

If you want your bot to be worth using, you need to make it truly useful. The “glorified form” Obamabot isn’t one likely to be often used. Neither is Facebook’s Poncho the Weathercat, which comes with a disclaimer that reads “typically responds within an hour.” As Nick Statt points out, “That’s neat, if you’re the kind of person who can spend an hour waiting to know whether it’s going to rain.”

Do you have the time to create an app that your customers will truly find useful, or are you developing one just because everyone else is?

Have you developed your own chatbot with some success? If not, do you think the pros of developing one outweighs the cons?

Begin developing a post-click landing page you can send your chat prospects to with Instapage’s designer-friendly platform. Sign up for an Instapage Enterprise demo today.