In 2017, digital advertisers had a golden advertising opportunity: Facebook in-stream video ads. The social media platform understood that since people are watching longer-form videos on mobile, they should match this behavior. This meant providing advertisers with the option to place video ads directly within live and on-demand videos on mobile devices.

Online video ads have never been the same when you consider 70% of these videos are viewed to completion and deliver an average on-target rate of 89%. Couple those impressive stats with the fact that most in-stream video ads are played with sound, and it’s easy to see why digital advertisers take advantage of this ad type.

As defined by Facebook, this ad placement allows advertisers to deliver 5-15 second, non-skippable, mid-roll video ads to people who are already watching Facebook videos on a mobile device. As these ads don’t appear until at least 60 seconds into the main video content, people are actively engaged in “lean-back” watching mode, and the ad is just like a commercial break for the actual video.

Similar to any other Facebook ad campaign, advertisers can selectively choose their target audiences for in-stream video ads. Since these ads are audience-based, viewers of the same video may see different ads, depending on their interests.

To demonstrate, here is a Facebook in-stream video ad example from ABC News 4 that appeared about one minute into a Good Housekeeping video: 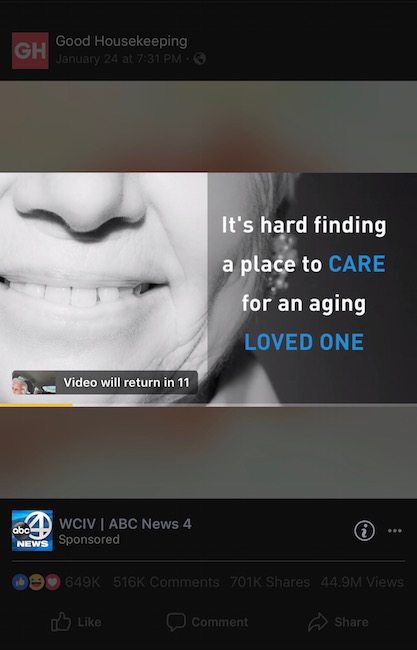 Digital advertisers have two options to place their in-stream video ads: Facebook and the Audience Network.

On Facebook, in-stream video ads play during videos (mid-roll) from familiar publishers and digital-first creators that specifically tailor their content to Facebook audiences. Here, the ads only appear on mobile devices, and only after 60 seconds of the main video content.

Advertisers can select their placement choices in the “Placements” section of ad set creation: 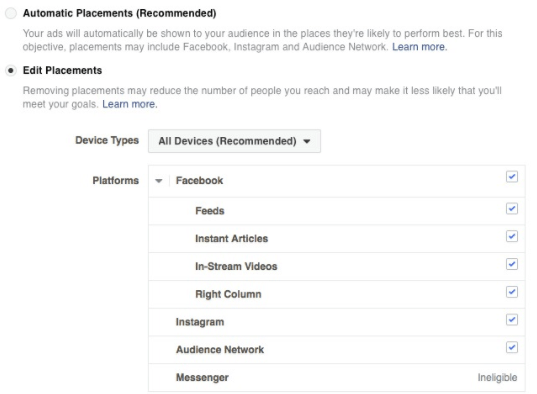 While selectively choosing your own or electing automatic placements are both options, Facebook recommends the latter for most advertisers because this allows the platform to find the most optimized placements for your video ads based on relevance, objective, and budget.

Before instream video ads, marketers could run news feed video ads, or Sponsored ads, like this one from Sun Basket: 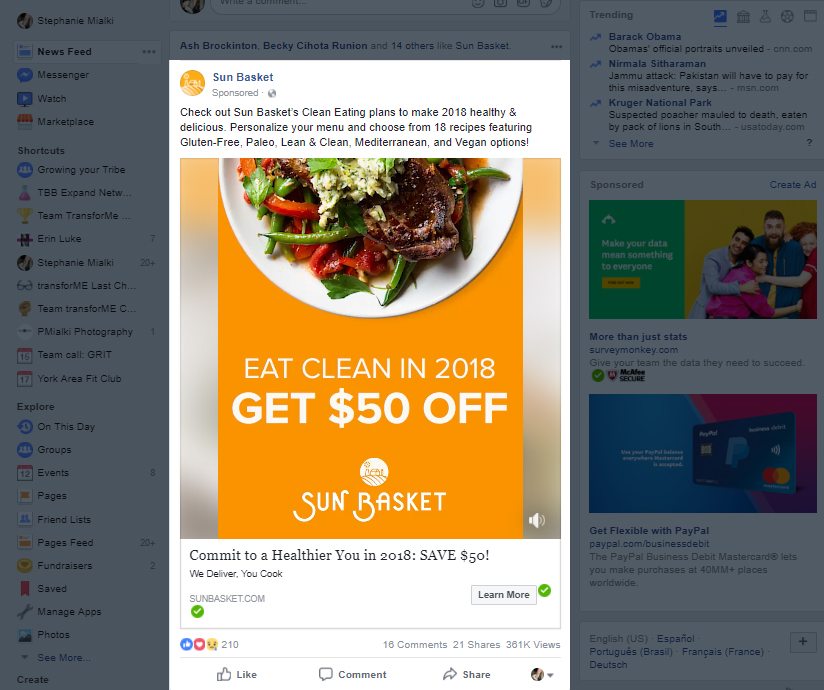 Another difference, seen below, is the video length ads can run — news feed for 240 minutes, and in-stream for only 5-15 seconds. In addition, in-stream ads require sound, while news feed ads do not.

Differences in the data for each video ad placement also exist. For example, viewership rates aren’t as high on news feed video ads. The two graphs below demonstrate how long people watch both types of video advertisements before their attention starts to drift: 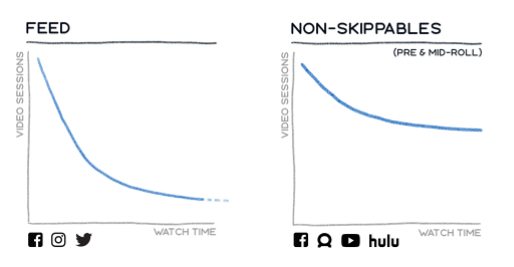 From that comparison, it makes sense that in-feed video ads have a sharper drop in watch times because Facebook users are typically mid-scroll and on the go, so it’s harder to capture their attention for an extended period.

Conversely, in-stream non-skippable ads are inserted into videos that users have chosen to watch, like this George Takei video with a 14-second Nokia Health mid-roll video ad. If the user wanted to finish watching the chosen video, he or she must view the video ad in its entirety, hence longer watch times: 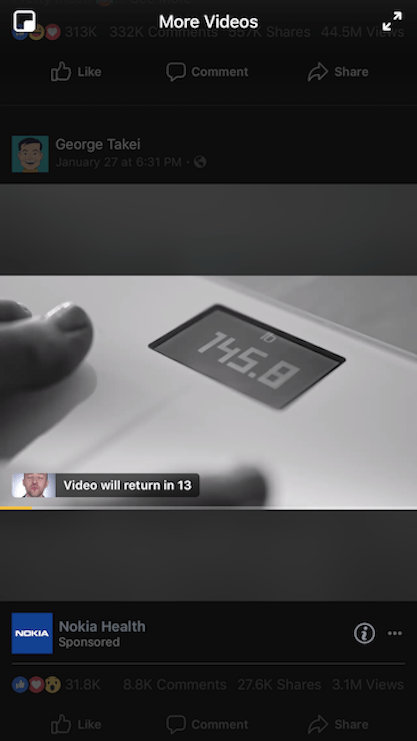 Since the person has already chosen to watch the video, it likely means that they’re in a watching mood and the sound is on. Granted, total watch time tends to decrease as video ad length increases, however in-stream ads still have longer watch times overall.

If your goal is to increase visibility, brand awareness, reach, or engagement, you should be using in-stream video placement. That’s because in the Facebook Ads Manager and Power Editor, this ad type is available for each of those specific objectives: Video Views, Brand Awareness, Reach, and Post Engagement.

Over one billion people see an ad through Facebook’s Audience Network every month, so you have access to a global audience with an average of 16% more people than Facebook or Instagram alone.

Remember those two graphs we showed earlier? Here is a more complete picture to strengthen the argument for in-stream video ads (non-skippables):

Audience-based targeting makes it easy to deliver relevant ads to the right audience, which is why this ad type is great for boosting brand awareness.

Facebook’s “suggested videos” also help grow brand awareness. When users are watching a video of their choice, suggested videos will automatically keep playing afterward. This allows more opportunities for instream video ads to get in front of users.

Typically, when consumers complain about advertisements, they’re really just complaining about bad ads — the disruptive, irrelevant, and poorly executed ones.

Good ads — are ads that are native, relevant, and optimized. They have the potential to increase reach. In other words, creative, entertaining, and useful ads get substantial shares and more prospect eyeballs.

Some advertisers feel that in-stream video has limited options, mainly because many platforms don’t offer them. The flip side to this, though, is that less competition from other advertisers means more ad engagement for you.

It’s important to note that advertisers aren’t forced to choose between these and in-feed video ads on Facebook. You can opt for one or both placements, depending on your goals and target audiences. The more video formats you deliver, the more robust and effective your campaigns.

If you’re concerned about associating your brand with certain sensitive topics. Facebook allows you to intentionally exclude your in-stream video ads from appearing in specific content categories. These include “Debatable Social Issues,” “Mature” or “Tragedy and Conflict.”

You can even block your ads from appearing on certain websites and apps, or with certain publishers. Just be sure to block all available domains and URLs of that publisher. Also, keep in mind that the number of blocks allowed in one year is limited to 10,000 domains or URLs.

If you choose to exclude your ads from sensitive categories, it may also limit your campaign’s delivery and reach, so it’s important to weigh the pros and cons of doing so.

Since launching in April 2016, Facebook Live has allowed businesses and users to increase visibility and engage followers in real-time. Now the social network is taking its Live platform a step further with Facebook Live in-stream video ads.

As of February 2018, Live ads are still in beta testing, but once complete, they still won’t be available to all advertisers. Only pages or profiles with at least 2,000 followers will be eligible for Live ads, and even then, they should have recent live videos with at least 300 concurrent viewers.

How the process works

When a user starts a Live video — and that video reaches 4 minutes and has at least 300 people watching — the Live video creator can simply tap a button that says, “You can take an ad break now:” 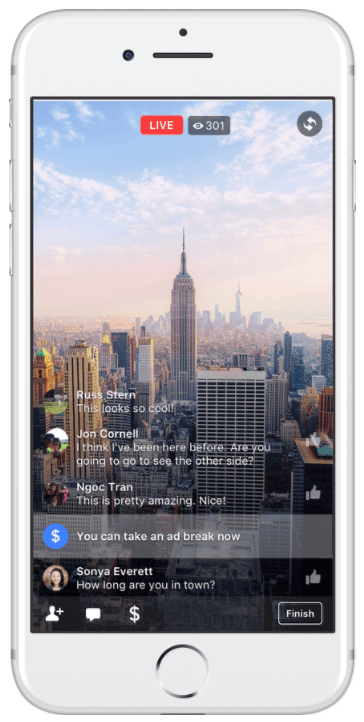 Facebook then automatically starts the ad break, which runs for a maximum of 20 seconds. If the Live video continues for five more minutes, the creator can take another ad break. The ad process continues this way every five minutes.

To make in-stream video ads perform the best for your brand, consider the following ad specifications and tips.

Specs: Sound is a must for all ad placements (Facebook or Audience Network).
Best practices: Each in-stream video ad on Facebook should also include captions.

Note: The new, comprehensive Instapage digital advertising specs guide contains everything in one place — dimensions, file formats, examples, and more — to create compelling advertisements across all platforms and devices.

Online video has proven to be more compelling than text. So, digital advertisers like you should be looking for additional ways to increase ad engagement, brand awareness, and reach. Facebook’s instream video ads empower you to accomplish all three.

Ads are one component; optimizing the user experience is quite another, though. You need message matching and a platform capable of providing an end-to-end solution so that generates maximum ROI. The Instapage post-click optimization platform is equipped with a designer-friendly builder, team collaboration, Instablocks™, advanced analytics, and more to make sure you optimize every post-click landing page for your prospects.