Want to nearly double your productivity today while boosting the odds you attract more business? Minimize your other tabs, put down your cell phone, and read.

What’s that? Of course — you don’t have time. You’re working on a tight deadline to deliver a proposal while you prep for an introductory call with a new client.

If that’s the case, you need this blog post more than you know. Here’s why…

By the sound of things, you’re a multitasker. In fact, that’s underplaying your talents. You’ve raised multitasking to an art form — prepping for calls, writing proposals, scheduling content — the number of jobs you can do simultaneously has no limit…

Except, it does — and that limit is one.

You may think that by multitasking you’re accomplishing more for your digital marketing agency faster, but the truth is you’re not. Studies have proven that humans weren’t meant to focus on two mental tasks at once.

Twice as many errors, a 40% loss in productivity, and double the time it takes to complete a project are all results of your attempt to do more simultaneously:

But who can blame you for trying? After all, your schedule is jam-packed. That proposal needs to be sent before lunch, the call is in 30 minutes, and the second half of your afternoon isn’t looking any less hectic.

Attempting to multitask leads to twice as many errors and a 40% loss in productivity.

To top it off, somewhere in between generating marketing collateral for your clients’ businesses, you need to get the word out on your own. To help you do that, we’ve compiled the following tips and quick marketing hacks to use when things get overwhelmingly busy.

1. Eat a live frog every morning

An early quote on the power of prioritization is credited to Mark Twain: “Eat a live frog every morning, and nothing worse will happen to you the rest of the day.” (Please don’t take that literally).

What he meant was, get your most intimidating, important task out of the way first thing in the morning and you’ll set yourself up for a more productive day.

At the time, this tactic was based purely on speculation and personal practice, but today there’s some science to back it up. Studies have shown that we have higher willpower, self-control, and focus in the first three hours after we wake up. Author and startup advisor, Benjamin Hardy, explains that Twain was on to something when he spoke that phrase years ago:

This makes sense on several levels. Let's start with sleep. Research confirms the brain, specifically the prefrontal cortex, is most active and readily creative immediately following sleep. Your subconscious mind has been loosely mind-wandering while you slept, making contextual and temporal connections.

It’s clear the first few hours after you wake up are the ones in which you’re scientifically going to be most productive. Don’t waste them answering emails. Sit down at your desk and imagine yourself leaving the office at the end of the day feeling accomplished. What’s the most significant thing you got done?

That’s the frog you need to eat.

According to Atlassian, chances are you’ll spend around 31 unproductive hours in meetings this month. Imagine what you could do with that kind of extra time.

Instead of holding a roundtable discussion the next time you’re in the conference room, try stand-up meetings, like Neal Taparia did with his staff. You may find, as he did, that it saves you enormous amounts of time:

Immediately I noticed that my meetings were shorter. For fun, I briefly tested the length of my meetings sitting vs. standing. Though not exactly a scientific experiment, I found my standing meetings lasted 36 minutes on average vs. 48 minutes sitting down.


His results are in line with a study done in 1999 that showed sit-down meetings took 34% longer.

A tip to speed them up even more? Pass around a medicine ball to each speaker. When it starts to feel heavy, it’s time to hand it off.

Yes, this sounds counterintuitive, but research shows that an area of the brain called the “prefrontal cortex” is primarily responsible for creative problem solving. The more you think, the more you tire it out.

The idea is, by doing nothing — not thinking at all — you allow it to absorb and integrate information. Effectively, thinking less about a problem will boost the odds you can come back and solve it more quickly. It’s a concept similar to the modern-day science of building muscle through physical exercise.

When you’ve pushed a particular muscle group to exhaustion for hours in the gym, you haven’t built any mass at all. What you’ve done is worked your body to the point that tissues tear. When those tissues repair during the recovery process, that’s when growth is facilitated.

So, give your brain some 10-30 minutes of rest every day (try mindfulness meditation). You’ll be much better able to tackle that creative brief once you do.

Some of your followers listen to podcasts, some watch videos, and others prefer getting their daily dose of content in blog post form. Ideally, you’d create something original for all of them if time allowed. Unfortunately, it never does.

So instead of trying to make something brand new for each group, use one original idea and split it into several content types.

For example, if you’re conducting a video interview with an influencer to share with your YouTube subscribers, use the audio to create a new podcast for your listeners. Then, take the transcript and turn it into a blog post. You can format it like you would any post, or use the transcript word-for-word in a Q&A format. After that, if possible, try to turn that blog post into an infographic.

Once you get over thinking you need to create something original for each of your buyer personas, you actually will have enough time to please everybody.

Right now your best writers are working on some lead magnets for a client, and there’s no time in their schedule to create content for the agency blog next week. So how do you keep a consistent flow of content?

Google’s Matt Cutts may have pronounced guest blogging for SEO dead a few years ago, but when done right, it remains a powerful way to build business relationships and earn the attention of prospects.

Today, many marketers still jump at the opportunity to expand their reach to another audience. To take some pressure off your in-house writers, explain why that audience should be yours.

6. Engage with prospects and customers on social media

Wouldn’t it be great if you had the time to personally write your business contacts a friendly handwritten letter, or drop them a line to catch up?

While we recommend doing this at least once in awhile (see number 1 in this article), it’s not a realistic regular routine. Instead, do your best to keep in touch with them via social media. An infographic from MarketingProfs shows just how powerful a practice this can be.

It points out that 85% of people feel more connected to a business when it’s following them, and that from 2012 to 2017, CEOs using social media for customer communication has jumped from 16% to 57%. Think there’s a reason for that?

Once you’ve started engaging with prospects and customers on social media, it’s easy to get distracted. Nobody’s immune to the draw of a cat video.

But those ten extra minutes of daily cuteness add up. Before you know it, by the end of the week you’ve wasted nearly an hour watching furry felines try to fit themselves into tiny boxes. That’s time you could’ve spent identifying influencers to solicit guest blog posts from, or engaging with the people who pay your bills.

To prevent that from happening by staying on-schedule, real estate investor Brandon Turner recommends you try the “time blocking” technique:

No doubt you've heard this concept before, yet so few people actually take the time to do it. They think, "I'm going to work for two hours a day on X," but then things come up. The phone rings. The baby cries. The boss walks in. Soon, that "me time" turns into "we time" and the can is kicked down the road for another day. That project that's going to revolutionize your life is, once again, put on the back burner, replaced by tasks that, in the grand scheme of things, don't truly matter. Time blocking is more than simply hoping and wishing for the availability to work on a project. Hoping and wishing are not going to cut it in a busy world – you must schedule it!

Instead of checking your email 36 times an hour and switching tasks every 3 minutes, block out some time to focus on just one job for a limited amount of time per day.

Sure, it might be easier said than done, but the idea is the more you practice it, the better you’ll get, and the more productive you’ll be. If you need some help, try one of these online tools that have been created to help avoid distraction.

8. Turn your employees into promoters

Finding brand advocates can be a challenge and a total time-suck. If you’ve been having a difficult time building a following that regularly engages with your business and shares your content, consider asking your employees to pick up the slack.

Research shows that 50% of employees already post to social media about their employers, so a small request to like, share, and comment won’t be much of an imposition. Additionally, it has the power to get your content in front of eyeballs that matter.

If you’re engaging with influencers, publishing guest posts, and turning your employees into promoters, but you’re still not getting the attention your business needs to grow, try asking for more.

That’s right — it’s that simple. A report from the Agency Management Institute on business referrals states that 80% of your clients are happy to recommend you to others if you just ask them to.

Considering a report from HubSpot indicates that 90% of most marketing agencies’ new business leads are generated through referrals, a quick “Hey, do you know of anyone looking for copywriting work?” has the potential to bring a big return without nearly any investment at all. 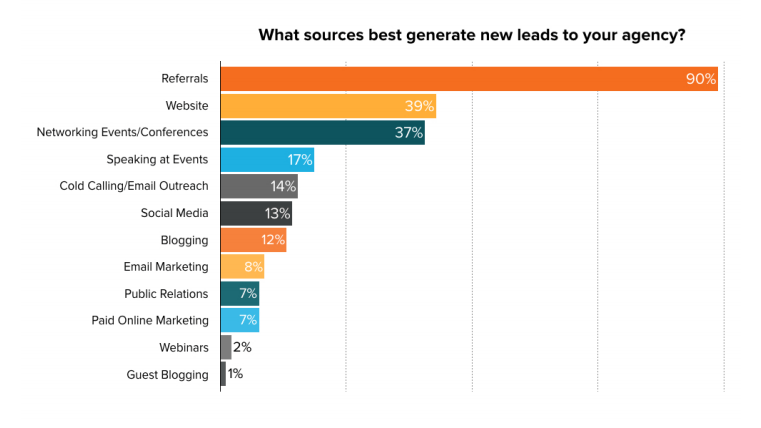 Have you hired an agency for your post-click needs yet? Sign up for an Instapage Enterprise demo today and find out more.