17 of the Best Creative Advertising Ideas from around the World

Today, we’re bombarded by so many unremarkable ads that we forget just how creative advertising can be. In defense of creatives, it’s understandable. A plain-Jane ad will often do the job as well as something more expensive, time-consuming, and thought-out. When resources are scarce and campaigns plenty, the main goal of copywriters and designers is to communicate a USP efficiently.

What is creative advertising?

To many people, a creative ad is a clever ad or a funny ad. But that can’t be the only criteria we use to judge. If the ad doesn’t tie in with the product or the brand that’s selling it, it’s not effective. How many times have you heard someone say, “That really funny Super Bowl ad with the kid and monkey/talking bird/football-playing grandma… what was that for again?”

If people remember the ad but not what it’s for, it was probably creative, but it wasn’t an effective ad. When looking for creative ad campaigns, we can’t talk creative without talking about advertising.

Why is creative advertising important?

Today creative advertising is more important than ever because we’re bombarded by mostly lackluster ads. Online, offline, we tune them out.

When was the last time you didn’t press “Skip” on a pre-roll video ad? Have you more than glanced at a print ad in a magazine lately?

If it’s true that we see thousands of ads per day, we should remember at least a few decent ones by night. But, odds are you can’t recall even five ads you saw this week that were especially creative.

And that’s probably the reason so many get tuned out: an emphasis on quantity over quality. In the words of Howard Gossage, “People don’t read ads. They read what interests them, and sometimes that’s an ad.” The following are creative advertisements across all kinds of mediums and industries.

How do you demonstrate the effectiveness of a blender without boring your audience ‘til they want to stick their head in one? Easy. You collect stuff like camcorders, MP3 players, rotisserie chickens, toss them in the blender and see what happens. The series “Will It Blend” has been nominated for a YouTube award for best series, and its host, Tom Dickson, has appeared on the Tonight Show with Jay Leno for his part in it. Needless to say, the campaign was a major success for Blendtec. 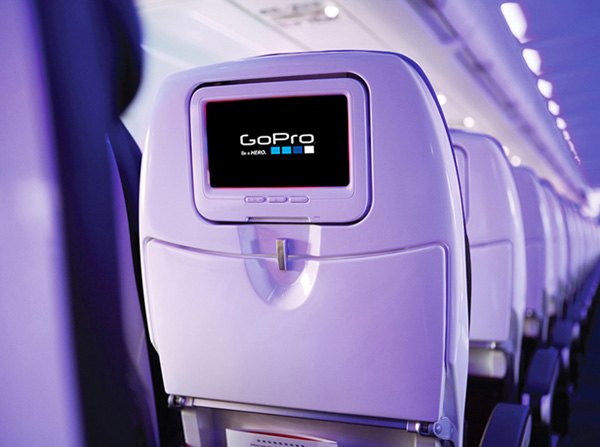 When it comes to getting your customers to do your marketing for you, nobody has it better than GoPro. The company is happily drowning in dazzling videos from its own users. A few years ago, GoPro partnered with the now-defunct Virgin America Airlines to create an in-flight branded channel to bring those videos to an even bigger audience than video platform subscribers online. At the time, any passenger in-flight could tune in to see nonstop GoPro footage of human (and even animal) experiences around the world. 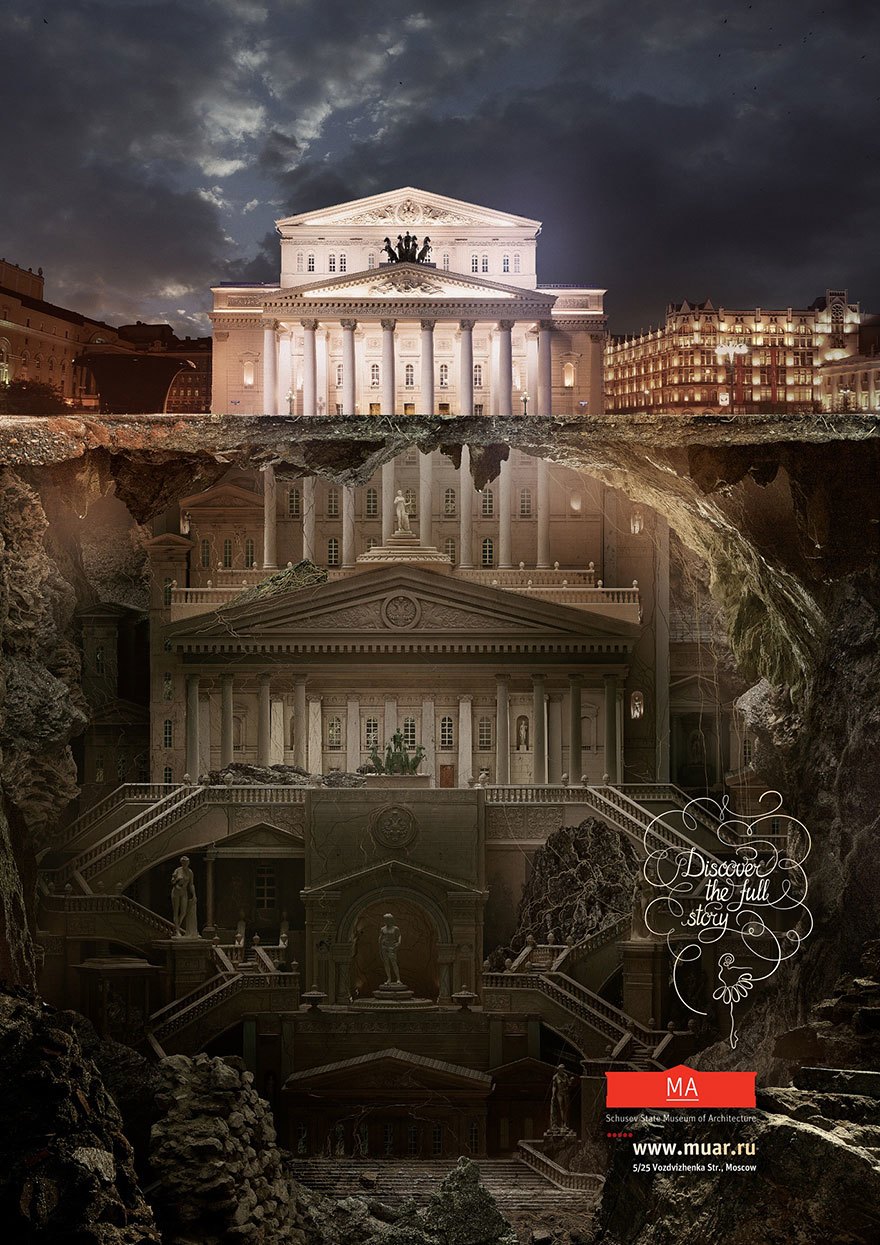 Every day we walk through cities completely oblivious to the story of each building. Architects, you might say, are the world’s most overlooked artists. This ad for the Schusov State Museum of Architecture plays on that by implying that the buildings we see are just the tip of the iceberg. And you can discover the rest of the story at this museum. 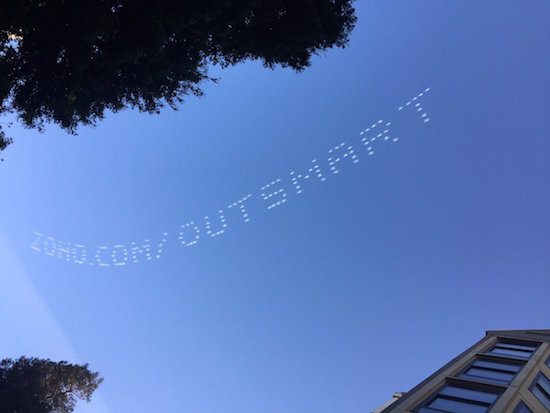 When your biggest competitor puts on one of the biggest marketing conferences in the world, you can create your own party, or you can crash theirs. That’s what Zoho did here, by hiring five pilots to spell out “Zoho.com/outsmart” in the sky during Salesforce’s Dreamforce conference. The URL leads to a post-click landing page for the CRM featuring the headline “Outsmart Einstein with a smarter CRM.” While we’re not sure what Einstein has to do with customer relationship management, the stunt sure was a creative way to drive traffic to a post-click landing page. 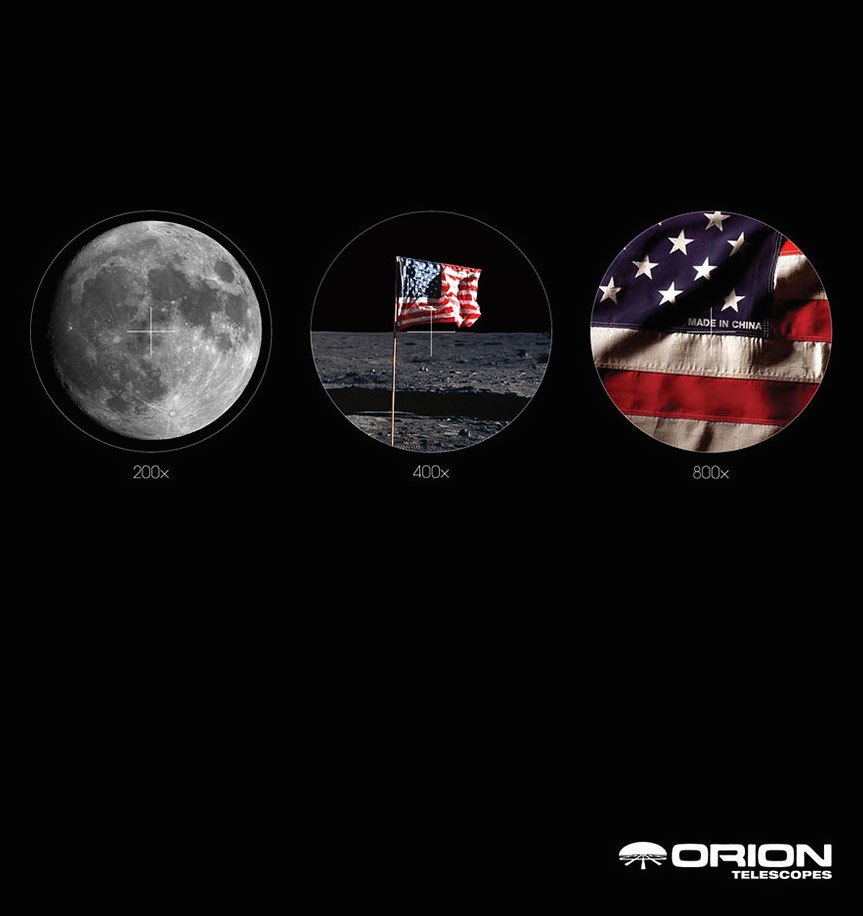 Here’s a brilliant ad that gives you a product demonstration in three photos. With an Orion Telescope, you won’t just see the moon or the American flag on it. You’ll see the “Made In China” writing on the fabric itself. Product demos don’t have to be boring or drawn-out. This one shows you what the product can do in just a few seconds. 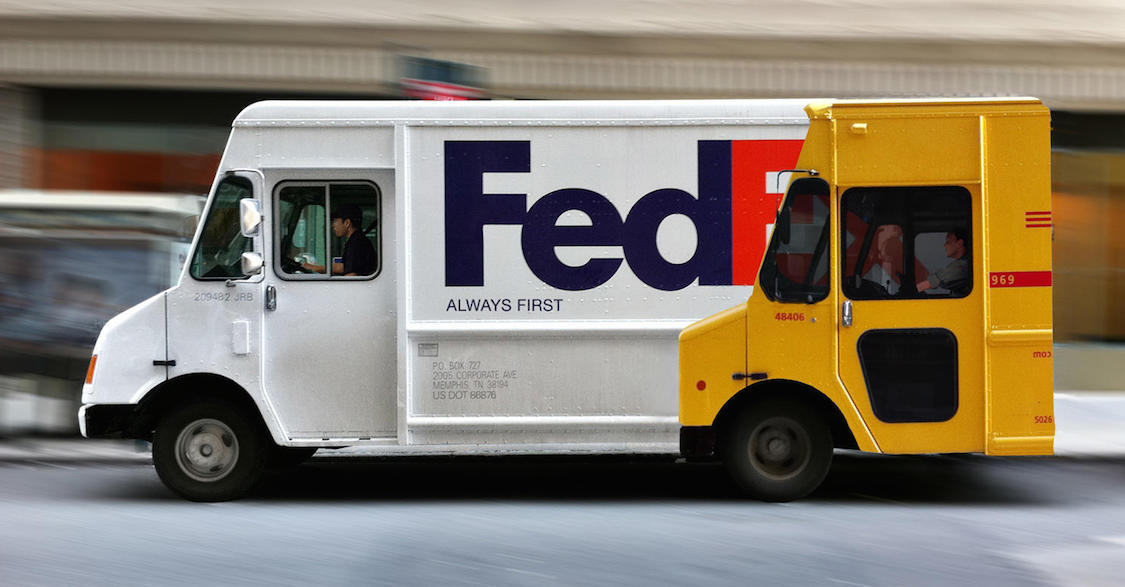 No, that’s not another delivery truck racing to beat FedEx to the next stop. It’s a cheeky paint job conceptualized by two students at the Miami Ad School in Hamburg, Germany. The message is easy to understand here, and it ties into the company’s value proposition: FedEx is always first. 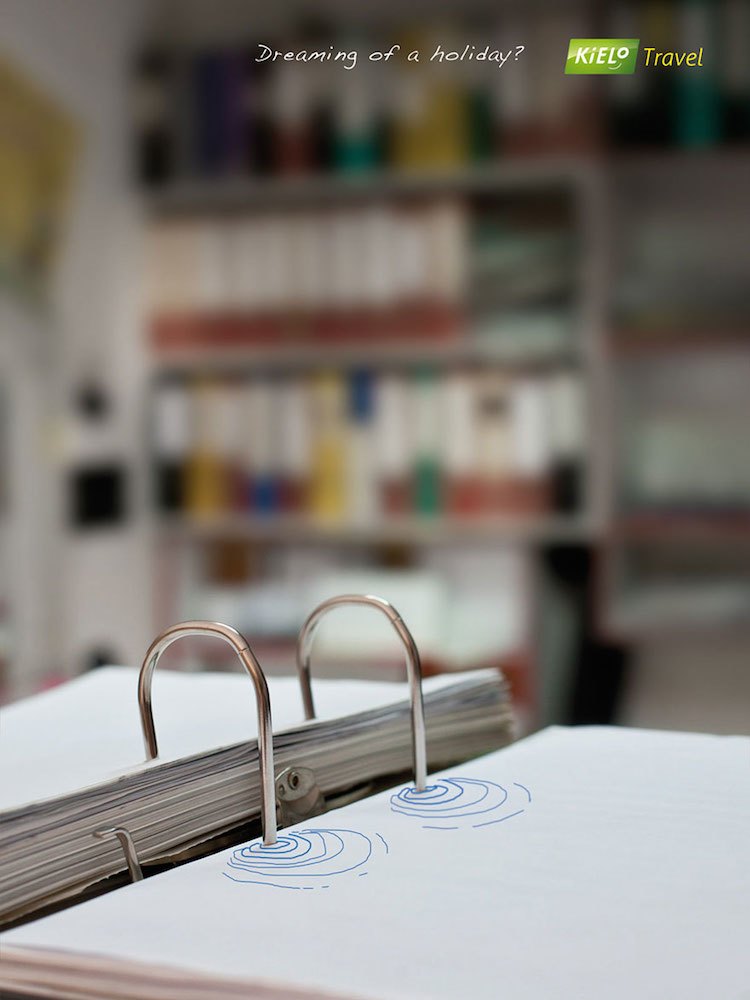 If you’re going to effectively reach your customer, you have to put yourself in their shoes...or in this case, seat: bored to death with a binder open on the desk. Most vacation ads use pretty pictures of oceanside hammocks between palm trees, but this relates to the vacation daydreams we all regularly have. If you’re craving a getaway, even binder rings can look like the handle of a pool ladder.

Some of the greatest ads are the ones that surprise you. They hit you with something you weren’t expecting. And that’s exactly what this ad for a new line of hair products did to subway commuters in Sweden.

On train platforms, digital screens with images of models from the neck up were equipped with “ultra sonic sensors.” When a train arrived, these sensors detected it, and made it appear as though the models’ hair was blowing as a result. The result is an eye-opening illusion commuters won’t soon forget. 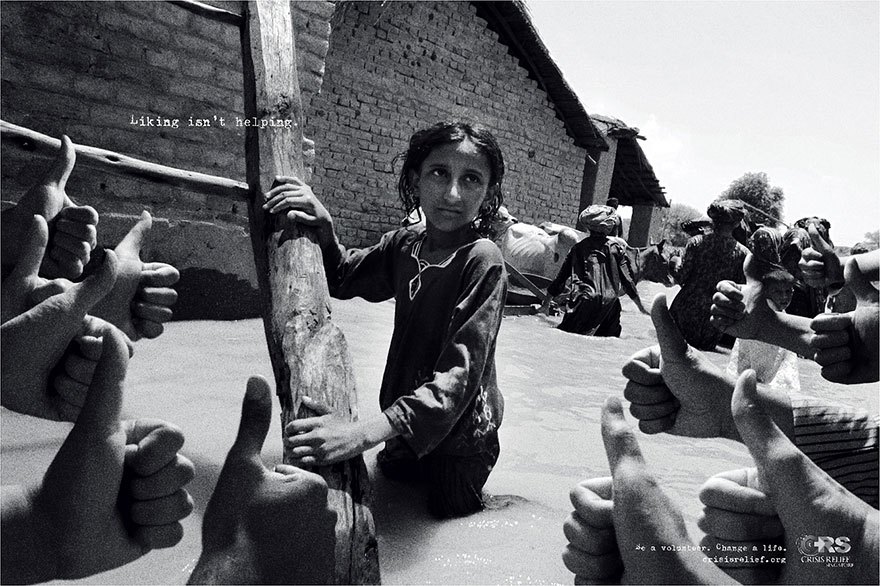 The message of this print ad from Crisis Relief is simple but powerful. When you click “like” on an image of people in crisis, it doesn’t help. Volunteering, on the other hand, will. “Be a volunteer. Change a life,” the ad concludes before calling the viewer to action with a URL. 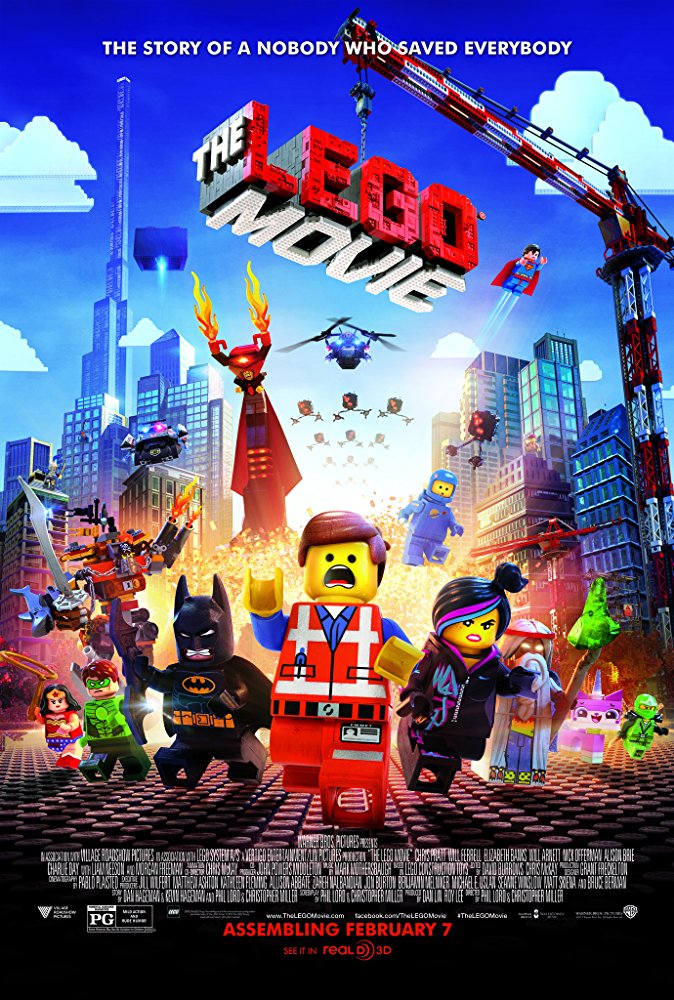 No “creative ad” list is complete without a mention of the LEGO franchise. The building block company has, through creative genius, somehow convinced people to PAY to watch ads about LEGO. Movies, video games — these are the kinds of ads Mr. Gossage was referring to when he said, “people read what interests them.” Only today, LEGO fans aren’t just reading. They’re watching and playing — and most importantly, buying. 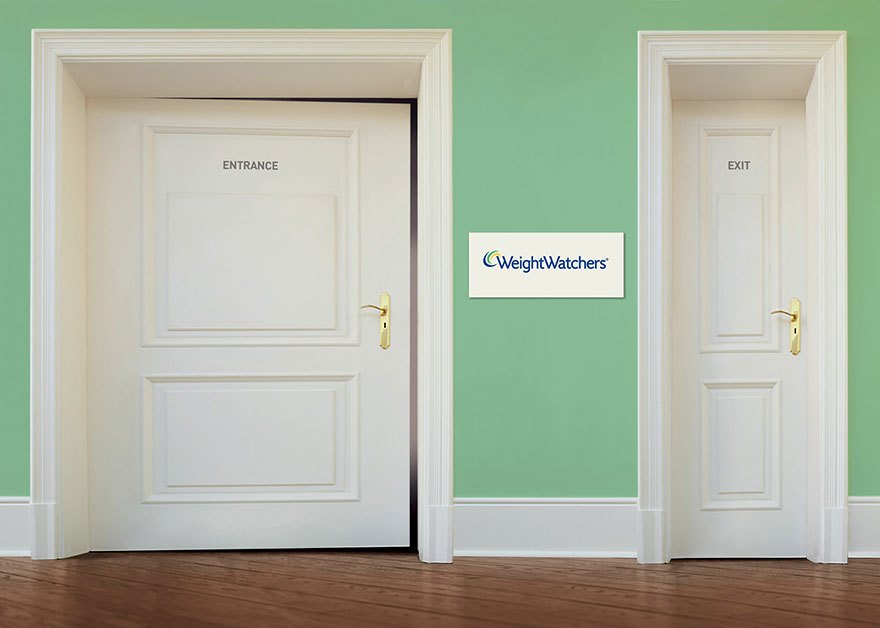 This print ad from Weight Watchers is a little on-the-nose, but it communicates the value proposition superbly. Walk in through a big door, come out fitting through the smaller one.

The worst thing you can do when advertising a product like Lean Cuisine is to communicate “You need to lose weight” to the viewer. To show the public that Lean Cuisine stands for body positivity, they ran the “WeighThis” campaign, in which women communicated how they’d rather be weighed. Examples include things like “by how much love I give my children.” Those examples were then written on boards by an artist and hung on a public wall for all to see. With this campaign, Lean Cuisine effectively said, “Hey, weight’s not everything. You’re great as you are. But if you ever want to get healthier, we’re here for you.”

No commercial can truly capture the support of a parent throughout their child’s Olympic journey, but this Procter & Gamble commercial comes close. The two-and-a-half minute spot combines a montage of falls, injuries, and failures with clips of encouragement from mom, concluding with a triumphant shot of the athletes competing for Olympic gold. Set to the inspirational tune of Ludovico Einaudi’s “Oltremare,” it’s enough to touch even those who aren’t a fan of the winter games.

When you think of all-time great athletes, the first to come to mind is likely Michael Jordan. Yet, this ad portrays him as anything but: “I have missed more than 9,000 shots in my career,” says Michael’s voiceover, “I have lost more than 300 games”... If you haven’t seen it, we won’t give away the ending. But we will say that this is one of those ads that changes perception. It concludes with a shot of the Air Jordan logo, which has become one of the most recognized in the entire world, largely due to commercials like this.

This highly creative ad uses the height difference between children and their abusers to communicate what could be a life-saving message. When viewed by the average 10-year-old, the ad displays a phone number for abused children to call, which is completely invisible to their accompanying abuser. Lenticular technology allows advertisers to take the average height of a child and an adult to convey two separate messages to each. 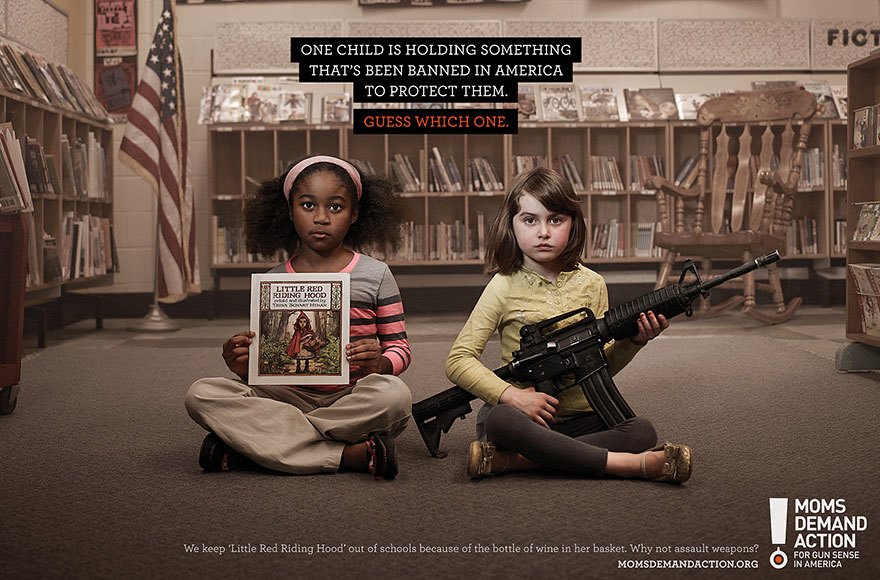 “We keep ‘Little Red Riding Hood’ out of schools because of the bottle of wine in her basket. Why not assault weapons?” This Moms Demand Action campaign highlighted much less dangerous things we’ve banned, like dodgeball and Little Red Riding Hood, before banning assault weapons. The message itself is powerful, but the image of the two girls holding a book and a rifle respectively really hammers it home.

A few years ago, Kipchoge nearly became the first human to break 2 hours in the marathon when Nike orchestrated his attempt called “Breaking 2” with pacers on a formula one racetrack. Crossing the line at 2 hours 25 seconds, Kipchoge and Nike came just short of what could’ve been arguably the most impressive branded stunt of all time. Still, 13 million people tuned in on Twitter to watch the attempt, and the YouTube video has been watched 2 million times in total.

It takes more than creative advertising

Remember, a creative video or image or event that people enjoy and remember is great. But, if they don’t associate your brand with that experience, it’s not an effective ad. You can’t have creative advertising without advertising.