For consumers, comparative advertising is more than a branded battle taking place in public. Though entertaining, it can actually empower them to make better buying decisions.

For advertisers, the stakes are higher. The right comparative advertising campaign can level the playing field for smaller brands and declare superiority for others. But the tactic involves finesse. A wrong move can set a brand up to lose customers, reputation, and even a legal battle. If you’re considering a comparative ad campaign, here are some things you should know.

What is comparative advertising?

Comparative advertising, sometimes called “comparison advertising,” is an advertising strategy in which a brand compares itself to a competitor to highlight parity or superiority. This could be in a side-by-side comparative fashion, with media that calls out a specific competitor by name, or even stunts like blind taste tests between Pepsi and Coke:

The FTC, which regulates issues related to comparative advertising, calls the tactic “beneficial” to advertisers, agencies, broadcasters, and consumers:

Despite these advantages, there are ways the tactic can backfire. Some of the most severe occur when brands break the law.

Brands get sued all the time by consumers and even other brands. So before you start planning a video to jab your competition, you want to know: Is comparative advertising legal?

The short answer is “yes,” as long as you can prove your claims, and they’re not misleading or deceptive to consumers. The long answer, however, involves some specific guidelines about just how you compare yourself to the competition. What you say about you, what you say about them, and where you say it, all affect whether your rival can sue you.

As Lenny Samuels points out in a blog post for Bergman Singerman LLC, the FTC separates comparative advertising into two categories:

According to Samuels, for a business to seek legal recourse under the Lanham Act, they have to show:

If you’re questioning whether you or your rival has a case under the Lanham Act, that’s best hashed-out with your legal department. But the point stands: Comparative advertising is certainly legal. Still, that doesn’t mean you should use it.

Should you use comparative advertising?

You’re well within your rights to trash talk the competition as long as you can walk the walk. But should you? Comparative advertising is risky for a lot of brands.

First, comparative advertising is like picking a fight. Even if it’s implicitly, you’re calling out another brand and saying publicly: We’re better than you. So, if you decide to use the strategy, you should be ready for retaliation. And the last thing most brands want to do is open themselves up for attack.

Second, you risk looking like a bully. Consumers are used to seeing negativity in political ads but not nearly as often in product or service ads. When one political candidate attacks another, they think “par for the course.” On the other hand, when a brand attacks a rival apropos of nothing, it can leave people feeling, “was that really necessary?”

There are two worthwhile occasions to use comparative advertising, which relate to parity and superiority claims outlined earlier:

When customers can’t tell the difference between you and your rival.

There are some products and brands that people aren’t as passionate about. Consumers may be fiercely loyal to Mac over PC, but are they passionate about body wash? Financial apps? Internet service providers? Many consumers are under the impression products like these are all the same, and a comparative advertising campaign can help set them apart.

There’s a misconception about your brand as it relates to your rival.

To consumers, brand perception is reality. So if they are under the impression that your brand is inferior to your rival, they’re going to think it is, even if that’s not the case. As you’ll see later, Sprint used a comparative ad campaign to battle the perception that Verizon dwarfed its areas of coverage. While that may have once been the case, Sprint’s reliability is now within 1% of Verizon, and a comparative ad campaign was valuable to battling this misconception.

If you’re in one of these two situations, a comparative advertising campaign may help you differentiate yourself from the competition. Here are a few tips to keep in mind when you’re creating yours:

Be ready to back it up

You need to be able to back up the claims in your comparative ad campaign. If that’s a blind taste test or a research study on the effectiveness of software, it should be at the ready. Not only because you should be worried about getting sued, but because you could be called out by your competitor, too.

Marketing and advertising are as highly visible to consumers as they’ve ever been, and that means if you get called out on Twitter by your rival or their fans, you have to be ready to prove your words. If that’s with a microsite, or a video, or a research paper, so be it, but you should have it prepared for when people yell, “Prove it!” Without a way to substantiate your claims publicly, your campaign may seem like a stream of empty words.

Don’t pick on the little guy

Nobody likes a bully. And historically that’s true in comparative advertising too. In an interview with Ad Age, Kit Yarrow, a consumer psychologist, says “The one place where consumers like negativity is when they feel like they’re helping David battle Goliath.” Pepsi vs. Coke and Mac vs. PC are two of the most well-known comparative ads of this kind.

But recently, brands have strayed from this rule. Assistant Managing Editor of Ad Age, EJ Schultz, points out that brands like McDonald’s have gone after Burger King, who has a smaller market share. The same goes for Bud Light and MillerCoors. Likely, the reason this works is both brands have gone beyond David vs. Goliath status to a Goliath vs. Goliath battle, in which most people don’t care who wins, as long as they get to see a good fight.

If you’re smaller, you’re in the clear when it comes to jabbing the competition. If you’re a bigger brand, at least make sure your rival has a significant market share. Otherwise, you look like a bully picking on a helpless target. Not only that, but you risk giving that target free publicity.

Keep it fun and innocent

As little as people like a bully, they equally dislike people who take themselves too seriously. This is doubly true of brands. Nobody wants to watch you and your rival duke it out over who has the better value proposition. That’s a boring annoyance.

From a comparative advertising campaign, people want information and they want to be entertained. So if you’re going to poke fun at your competition, do it in a lighthearted way.

Revisit the PC vs. Mac commercial. There’s no animosity, no boring statistics or selling points, and the exchange between “cool” Justin Long and his nerdy PC counterpart is funny and entertaining. And it still gets the message across. If you’re going to jab your competition, make sure you don’t take yourself too seriously.

Of course, fun and light isn’t always necessary. Some advertisements aren’t meant to be humorous. And in these, you should strive to at least maintain objectivity. Don’t go so far as to pile on attacks.

Take Sprint, for example, who poached the most recognizable face of Verizon for their own comparative ad. In it, the actor claimed that Sprint reliability is within 1% of Verizon, making it just about as effective as the nationwide leader.

And while there were certainly opportunities for some fun, lighthearted jabbing (and you could argue this was accomplished just by poaching the actor), Sprint simply shared valuable information with the viewer. Could it have been more entertaining? Sure. Could it have been more disparaging? Absolutely. But Sprint got the message across: Don’t let perceptions of reliability impact who you choose as a service provider.

Compare something your customers care about

When Bud Light launched a comparative advertising campaign against its rival, MillerCoors, it centered around corn syrup. The claim was that MillerCoors used corn syrup in its brewing process and Budweiser did not. Here’s one of the spots:

Well, the response from MillerCoors was defensive, but the response from customers was: Who cares? The campaign wasn’t successful because, as it turns out, beer drinkers don’t care much about corn syrup in the brewing process. If you’re going to claim you’re superior to your customer, make sure your claim is based on something they find important about the product.

You may know some of the bigger rivalries — like PC vs. Mac, BK vs. McDonald’s, Sprint vs. Verizon — but comparative advertising isn’t just for the world’s most well-known brands. It can be a powerful tool for any size business. Here are a few examples from some smaller brands online.

Searching “FreshBooks vs QuickBooks” in Google may reveal this search ad from FreshBooks. Click through and you’ll see an infographic that compares FreshBooks with a bigger rival, QuickBooks, in six key categories: 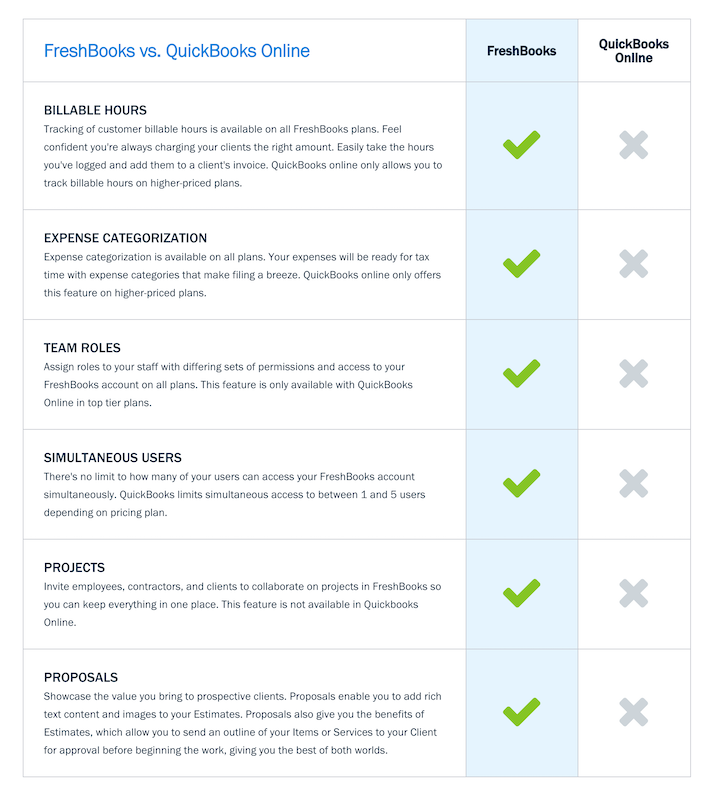 If you’re searching for an alternative to the well-known CRM, Salesforce, you might search “Salesforce alternative” in Google. When you do, you’ll likely see the above search ad. Clicking through it will reveal a post-click page that lays out six key challenges of working with Salesforce that you won’t experience when you use Apptivo.

In some cases, you don’t even need to search “vs” or “alternative” to find a comparative ad online. The one above was on a search engine results page for the query “Marketo.” And it’s evident that this is a comparative ad campaign since it uses “vs” in the title. Click through it and you’ll find a post-click page that lists Marketo’s flaws along with some “red flags.” With the headline “The #1 Alternative to Marketo,” it’s clear this page is trying to steal market space from their bigger rival. 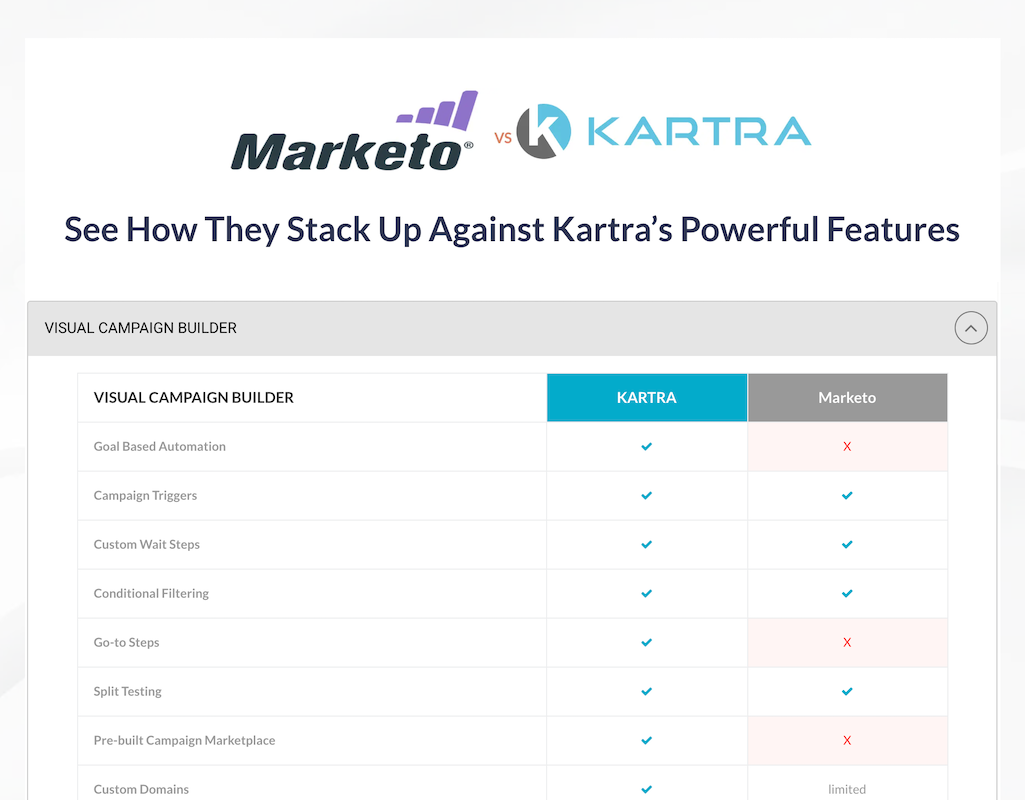 No matter the type of campaign, you must be able to scale it to all your customer segments. That means creating a post-click page for each comparative ad you deploy. This carries personalization through from the pre-click stage to the post-click stage, ensuring the highest level of relevance from click to conversion.