According to research from Facebook, there’s a chance nobody understands the videos you post to the social network.

You’ve probably seen the widely circulated research that shows 85% of video on Facebook is watched without sound. But, did you also know that internal data collected by the social network showed that 76% of video ads need sound to be understood?

Together those statistics have to be a little discomforting if you’re spending time, resources, and in some cases money, to serve video to audiences on Facebook.

It’s true; video is being consumed by users on the social platform in record numbers. Data shows that:

But, if you’re not communicating value without sound, immediately, there’s little chance your video will capture the attention of users scrolling through their news feeds. According to Facebook, the magic moment occurs at the 3-second mark.

“We know that 65% of people who watch the first three seconds of a video will watch for at least ten seconds and 45% continue watching for thirty seconds,” said the company in a blog post.

So, how do you convince viewers to watch longer by communicating value in the first few frames of your video without sound?

It’s not easy, but Facebook’s closed captioning feature may be able to help.

What is closed captioning?

Most of your experience with closed captioning probably came during movie night at grandma’s house — when the only way she could watch without blowing out everyone’s eardrums was by reading character dialogue at the bottom of the screen. But today, closed captioning isn’t solely for the hard of hearing.

If most videos on Facebook are watched without sound, and yours contains any dialogue, captions are really the only way to communicate your speaker’s message.

For a while, the only way to do that was by creating your own text overlay with video editing software. Now, you can have Facebook’s auto-captioning tool do it for you via the self-serve ad creator called “Power Editor.”

But, as we do whenever new technology is released, at Instapage we asked ourselves, “is it really worth using?”

Sure, the statistics suggest so, and research from Facebook claims that adding captions to your video can boost view time by 12% — but anyone who’s ever had their screen half-obscured by blocks of text knows that they’re annoying. Honestly, we’d much rather watch with sound.

Knowing you should never trust best practices wholeheartedly without testing them yourself, we set out to see what our viewers thought about silent, closed captioned video. Here’s what we found (so far)…

When our Social Media Manager heard that captions that had the potential to improve our audience’s viewing experience, and in turn, Instapage’s social media ROI, he and the design team started adding them to all our videos.

But in the back of his mind he wondered, “Do most users really watch with the sound off? Will captions really make a difference?”

To find out, he tracked metrics like sound-on views vs. sounds-off views, view time with captions and without, and a whole lot more for 2 months. In total, he collected more than 2 days’ worth of video view time from over 10,000 watchers. So far, the takeaways are as follows:

On the other hand, 83% of video views with sound on lasted for at least 10 seconds. Flipping the sound on may indicate a higher level of interest in the content being watched.

83% of video views with sound on lasted for at least 10 seconds.

Now, what happens when you throw captions into the mix?

To figure it out, our social media manager A/B tested an Instapage video in multiple instances on the same day of the week at the same time, for 2 months — with and without captions.

Here’s the “A” variation with captions: 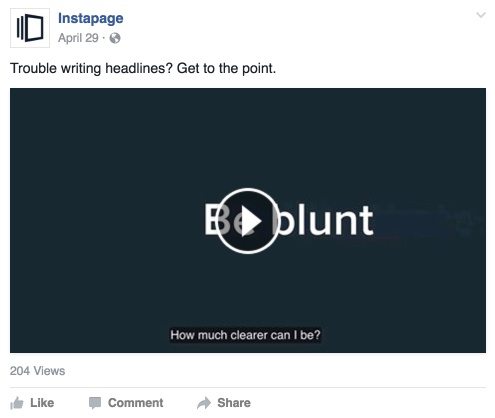 And here’s the “B” variation without captions: 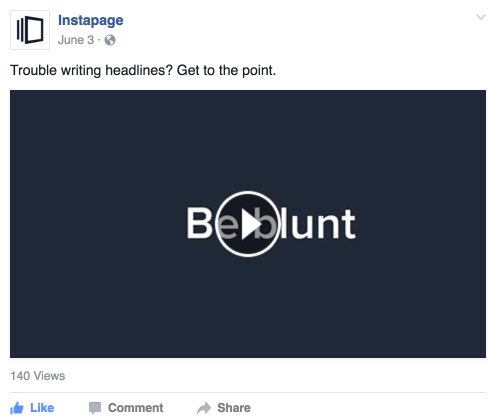 Here’s what he found after looking at data from 16.5 hours worth of video and over 4,000 views:

As we interpreted the data, we found a few things particularly interesting:

So, we looked again at ten-second views. They fell by 18%. That’s a big deal when you consider this video was more than 20 seconds long. So, while people were still watching the video by Facebook’s standards, nearly ⅕ fewer missed out on the meat of it — where most of the value was. That was bad news for them, and for us, considering the call-to-action was all the way at the end.

CTA clicks fell by 26% when captions were removed from Facebook videos.

Overall the answer to the question, “should we use closed captioning?” seems pretty clear at this point, at least for us here at Instapage. But that doesn’t mean we’re done gathering data.

Currently we’re in the process of testing different types of captions, like the ones shown below: 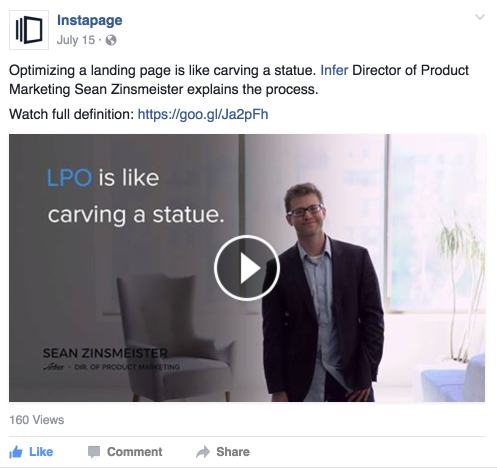 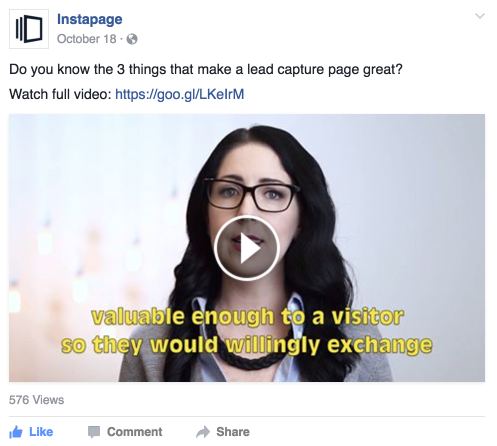 But, as powerful as captions clearly are, we’re not relying on them solely to capture viewers — and neither should you.

How to capture attention with more than just video captions

Facebook has a few recommendations that we’ve also found useful to draw scrolling users to our videos.

1. Use brand colors, themes, and imagery consistent with your brand to help people recognize that the video was produced by you. There’s no question about who made this video: 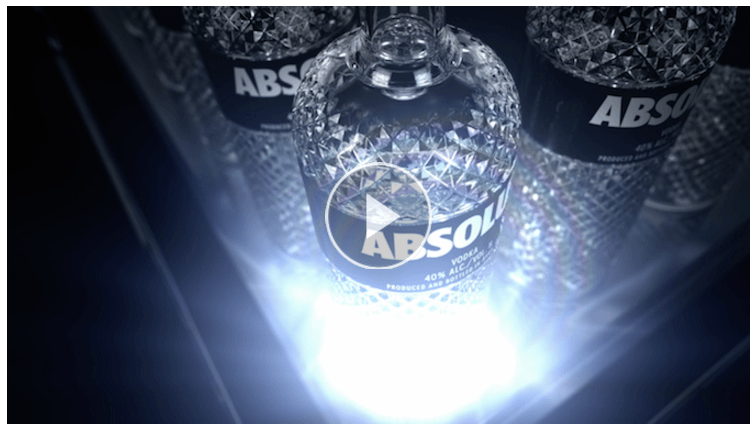 2. Pick an enticing thumbnail to stop scrolling Facebook users in their tracks. Use bright colors and recognizable people, like this Apple video featuring Taylor Swift: 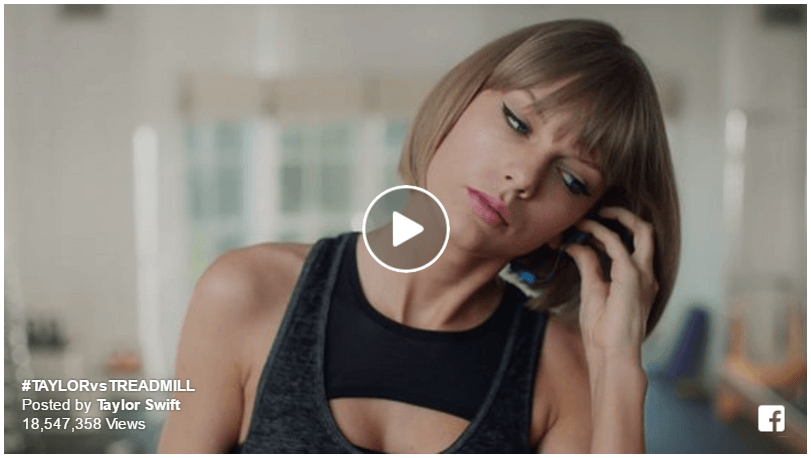 3. Add movement to the first few frames of your video so people recognize it as more than a photo. Even if your video is closer to a slideshow, you can make this work. We did it with a short attention-grabbing clip of a rock smashing glass. Here’s another great example from Ubisoft’s Ghost Recon video game series:

4. Try featuring faces in the first 3 seconds of your video. People are psychologically wired to respond to other human faces, especially if they’re looking into the camera to make eye contact. Follow Optimum’s lead on this one: 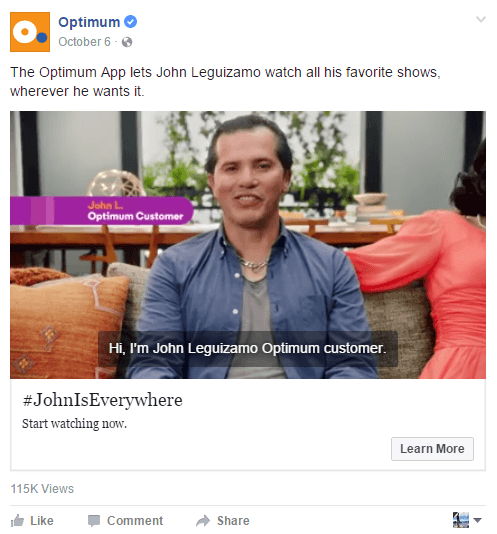 No doubt, closed captioning videos can increase engagement, click-throughs, and leads. Once people click through your video, make sure you’re using a dedicated post-click landing page related to the video. Instapage makes it easy for all marketers to create a fully-customizable post-click landing page. Sign up for an Instapage Enterprise demo today.