Changes in Advertising Over Time: How Personalization Keeps Getting Better

It’s hard to imagine that, only a decade ago, digital marketing was still in its infancy. Social media was new. Mobile was hardly a thing. post-click landing pages? Conversion rate optimization? They’re still toddlers in comparison.

In an industry that feels like it should be measured in dog years, it’s rare marketers look back at how far they’ve come so quickly: How’d we get from bombarding internet users with irrelevant, ugly, flashy ads like this one…

…to marketing to an audience of one? When did people begin expecting personalized ads based on their demographics, psychographics, behavior, and more? And how did it change advertising as we know it?

Changes in advertising over the years: digital then and now

In 1994, AT&T ran the ad above, the first of what we’ve come to know as the banner format. “Have you ever clicked your mouse right HERE?” it asked in tye-dye text. “YOU WILL” it commanded with the help of a visual cue.

Imagine seeing this today on one of your favorite websites. You’d likely chuckle at the pitiful attempt at earning your click. You’d ignore it. Or, you’d pass it through the marketing department as an example of how not to create an ad.

Because it flies in the face of everything we know about getting people to click. The ad is black with multicolored text in the foreground (distracting, hard to read), and some of it’s written in all-caps (YELLING IN PRINT). What’s worse than the design is the copy itself. No value proposition, no brand identity — we don’t know what this is or where it’s coming from or why we should feel safe clicking it.

Regardless, it generated a click-through rate of 44%, with curiosity as the driving factor. It was a lucky shot in the dark when the web was new and mystery was capable of driving clicks. And, though it’s not likely to work now, back then, it birthed an entirely new type of ad.

In the following year, display advertising would take off as a way to keep information free while rewarding those who created it. Publishers benefited from ad revenue, users got free information, and advertisers earned exposure. The only trouble was, advertisers weren’t quite sure who they were exposing their ads to.

It was the purest form of offline, outbound advertising transferred to the web. You put your ads on the internet and hoped the right people saw them. Of course, you could increase the odds of that happening by placing your ads on web pages where your target audience was likely to spend time, but you had no specific data about who was seeing what.

For example, a print a magazine might know their offline readers were females aged 18-35, but, they’d have no clear way of knowing if that transferred to the web. You could make the assumption, but that’s about it.

Display advertising gets an upgrade

In 1995, that changed when an agency called WebConnect introduced a tool for placing advertisements based on demographics on a network of websites. Now, with data on who was visiting the website, advertisers would know where their messages were best received. Not only that, but through WebConnect’s proprietary tool, advertisers could:

It may not look like much to us now, but at the time, capabilities like these were revolutionary. And the following year, they would usher in an age of analytics. 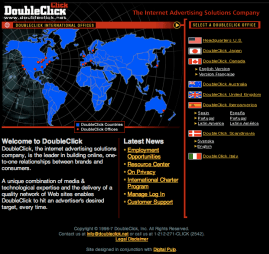 In 1996, today’s ad colossus, DoubleClick, was born. For advertisers and publishers online, it was of massive significance. Before this, there was hardly any organization of websites, analytics, and ad placements.

Now, publishers could sell ad space and advertisers could find them from one platform. Additionally, advertisers could optimize campaigns before they concluded. This was a big deal, as prior to DoubleClick’s D.A.R.T. tool (Dynamic Advertising Reporting and Targeting), ads and budgets couldn’t be adjusted until campaigns were over.

With better tools, both publishers and advertisers flourished, and it was no coincidence that around this time the number of both parties surged. But, not for long.

The banner bursts with the bubble

When the dotcom bubble burst, online advertising began to show signs of decay. Banner ad click-through rates plummeted, and with them, revenue for advertisers and publishers. Countless businesses went under, and they couldn’t be resurrected even with the help of a new ad format — pop-ups — which fell just as quickly as they rose. By the late 90’s businesses were looking for a new savior.

PPC advertising to the rescue

The first paid search model came from GoTo.com. Initially called “pay for placement,” it evolved to “pay per click,” through which advertisers could bid on search queries containing relevant keywords. The highest bidder won the highest placement on a search engine results page.

This made GoTo money at first, but led to bad user experience. It was a model built on who paid most, and as such, there was little regard for what searchers found valuable. All that mattered was how much a business was willing to bid. To combat the failures of a model like this one, a new one formed…

In 2000, Google AdWords made its debut. While its goal, like GoTo’s, was ultimately to generate revenue, it didn’t prioritize it at the expense of user experience. In addition to bidding, Google based ad positions on factors that contribute to Quality Score, which gave advertisers incentive to create great post-click landing pages.

The early 2000s were dominated by PPC search and display advertising, and during this time, major social networks gained steam. Twitter, Facebook, and YouTube were all emerging as the new online hangouts for younger generations. By the mid-2000s they had enough data to unveil an advertising platforms that, in Facebook’s case, would cement its position as second only to Google in digital advertising. Twitter would become the source for real-time content, while LinkedIn became the most valuable B2B network and YouTube earned video supremacy.

While the inception of marketing automation can be traced back to the 90’s (Eloqua, Infusionsoft, Salesforce were among big names in existence) the industry ignited in the mid-2000’s, and in the following years it would explode. In 2011, less than 150 marketing technologies existed. Today, that number is over 7,000:

As the number of vendors increased, so did integrations, which opened a world of advanced techniques for marketers combining tools. CRMs, retargeting tech, email marketing platforms, social media tools, analytics, post-click landing page platforms — they could all communicate with each other. And together, they made it possible to track and personalize like never before.

The state of personalized advertising today

Even 5 to 10 years ago, businesses couldn’t personalize like they can today. Two reasons have contributed to that fact:

The internet has become an established advertising channel. It’s been around for decades now, which means advertisers have had more time to collect data. With more data available comes better targeting. Google, for example, has an entire advertising profile on each of its users that include identifiers like search history, app usage, location history (if you’ve enabled location services), YouTube history, and more. Facebook keeps similar data on its users, and that’s not including all the information users offer of their own volition. In total, Facebook keeps an average of 98 data points on its 2.27 billion users which advertisers can target with.

The tools are advanced and integrated, which enables marketing techniques that weren’t available in the early days of online marketing. That includes the collection of data and its facilitation. With tracking tech, programmatic advertising tools, and post-click optimization platforms, businesses have more ways than ever to personalize their campaigns across devices, from end to end.

Based on this data and the tools that enable its use, Instapage has defined the first classification system for personalization in advertising. On a scale from 0-5, it ranks each level from basic personalization to advanced:

With the tools and data available today, users expect the highest personalization possible. They want to be treated like individuals, not an address on a bulk email list.

According to a poll from Epsilon, 80% of respondents say they’re more likely to do business with a company if they offer personalized experiences. A total of 90% say they find personalization appealing. However, few marketers are content with their personalization efforts.

The last few years have shed light on a disconnect in digital advertising: The ad campaign no longer ends with the ad. Online, the ad campaign ends on the post-click landing page after your visitors convert. And, while much of these platforms — Google Ads, Facebook, DoubleClick, for example — offer tools to personalize advertising, they don’t for post-click landing pages. Until a few years ago, optimizing what happens after the click wasn’t an option unless you had a team of testers and developers at your disposal. Today, post-click optimization tools enable it at scale.

Post-click optimization: What it is & how it enables personalization

Before post-click optimization, advertisers focused on earning the click. They put most their effort into targeting and creative, which tools to buy with, keywords to bid on, etc.

This improved click-through rate through personalization of the advertisement, but it left many campaigns disconnected after that. When a user clicks through, even if they’re your ideal customer, you’re not going to be able to convert them with any old post-click landing page.

A post-click landing page is a standalone web page that is created for the sole purpose of getting a visitor to convert. That could be to sign up, subscribe, buy, etc. Whatever the conversion goal, this page is created to elicit it.

Why a specific page and not one on your current website?

Because to continue the personalization of the ad, every campaign needs its own specific post-click landing page. When you direct users to an About page or a Pricing page, you’re sending them somewhere that doesn’t match the message of the referring ad. Your prospect gets some generic message after getting a hyper-targeted ad. The result: The work you’ve done personalizing the advertisement is for nothing.

Post-click optimization (PCO) bridges the gap between the ad and the conversion. It’s the practice of improving the odds your visitor converts after they click through your ad. It involves techniques like persuasive copywriting, A/B testing, conversion ratio optimization, and more.

Combine these techniques with the three pillars of post-click optimization, and you have a great post-click landing page: 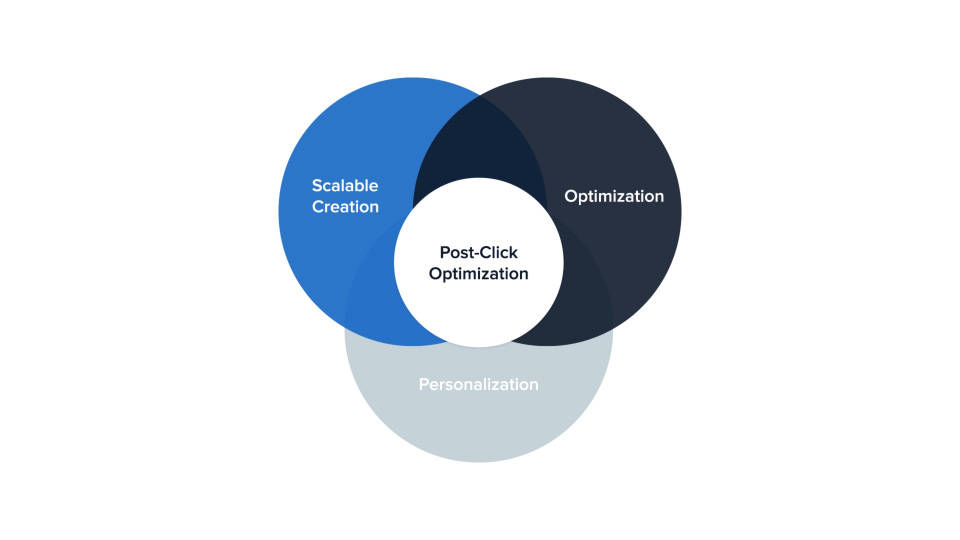 Scalable creation refers to the “every promotion needs a page” mentality. Without the ability to create many post-click landing pages — at least one per campaign — the second pillar, “personalization,” can’t exist. Today, generic web pages won’t do.

The third pillar, optimization, refers to the pursuit of improving conversion rate on your post-click landing pages. That involves data gathering with technology like heat maps and A/B testing, then making changes based on the results. And this process continues indefinitely, with the goal of adding to your bottom line.

Learn more about optimization opportunities throughout the funnel

Today, more marketers are prioritizing what happens after the click. And they’re looking throughout the funnel at places they can do it.

How long should their form be on a top-funnel post-click landing page? Which gated assets work best as leads get closer to the sale? What kind of elements are a must-have on sales pages?