What Is Ad Recall Lift & Should You Focus on the Metric in Your Digital Ad Campaigns?

If your ad appears on a user’s screen, it counts as an impression, regardless of whether or not it’s seen. Though the most widely used metric for ad delivery, impressions are an imperfect way of determining whether your ads are actually noticed.

And if they’re not seen, they can’t be evaluated, remembered, engaged with, or clicked through. Before you can get users converting and clicking, you have to know if you’re commanding attention. This is where the “ad recall” metric comes in.

What is ad recall?

Ad recall is a campaign metric that measures how memorable an advertisement is to an audience. Traditionally, ad recall has been measured by showing consumers ads and asking them questions about those ads later. Those questions can be as broad as “Do you remember seeing this ad?” and more specific, like “Do you remember the product/brand this ad is for?” 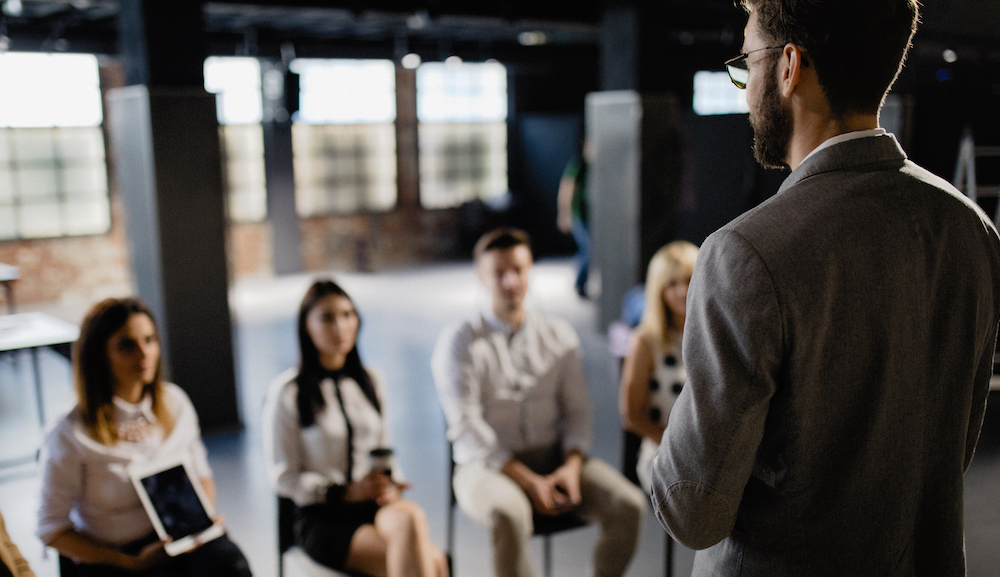 Online, there’s a problem with the way brand awareness campaigns are measured: Basic metrics don’t tell the full story. On many platforms, reporting is getting more advanced, but the same mindset holds true among advertisers:

But it’s not that simple. And to understand why, we need an understanding of these metrics, and the spectrum they exist on.

On one end, there’s the most basic of metrics: impressions.

As we know from before, impressions only indicate delivery. They mean: your ad appeared on a screen.

But when today’s screens are packed with content, and distractions are plenty beyond the screen, knowing that an ad appeared is not enough. A high impression count means only that there were opportunities for the ad to be seen, not that the ad was actually viewed.

At the other end, there’s the click-through. In most cases, click-throughs are the goal for any campaign, because they turn users to post-click landing page visitors. And the landing page is where conversion happens.

However, even great campaigns suffer from low click-through rates:

So does a low click-through rate mean a campaign is a total failure? No.

It means the campaign didn’t achieve its ultimate goal, but not that it failed completely.

Between these two metrics — impressions and click-throughs — there are a lot of questions:

The answers to these questions help advertisers decide where to go next. Scrap the ads and go back to the drawing board? Or salvage a campaign that’s showing promise?

Ad recall can empower advertisers to make these decisions. And in some cases, it’s even prioritized over click-throughs.

How is ad recall measured?

Ad recall can be measured different ways depending on who calculates it. Research teams can measure ad recall, and other platforms and tools that can help you do it, too.

Mostly, though, digital advertisers will encounter the ad recall metric on Facebook and Google. Here’s how it works out on both platforms:

On Facebook, the ad recall metric is known as “estimated ad recall,” though Facebook insists the “estimate” is highly accurate (more on that soon). The metric is available for those targeting objectives like:

The estimated ad recall lift metric gives Facebook advertisers an idea of how many people would remember seeing their ad if they were asked about it within two days. According to Facebook, it’s a good indicator of how well an ad resonates with its audience.

Ad recall lift, an optimization option for campaigns, will serve your ads to people who are likely to remember your ad within two days of seeing it.

Traditionally, this metric and audience would determined by surveys, but on Facebook, the company’s algorithm determines who to deliver your ad to based on: 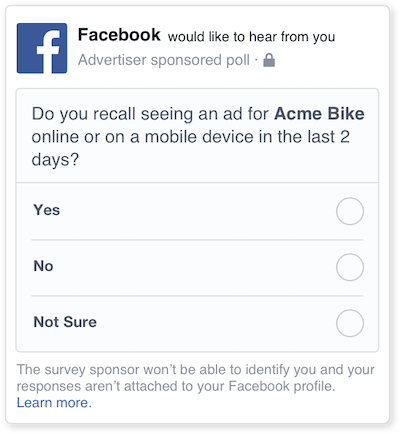 Then, with the help of machine learning, Facebook estimates the results of a full ad recall survey from its data for the metric.

Specifically, estimated ad recall lift (people) is defined as the incremental number of people that would answer “Yes” to “Do you recall seeing an ad from [brand] in the last two days?” 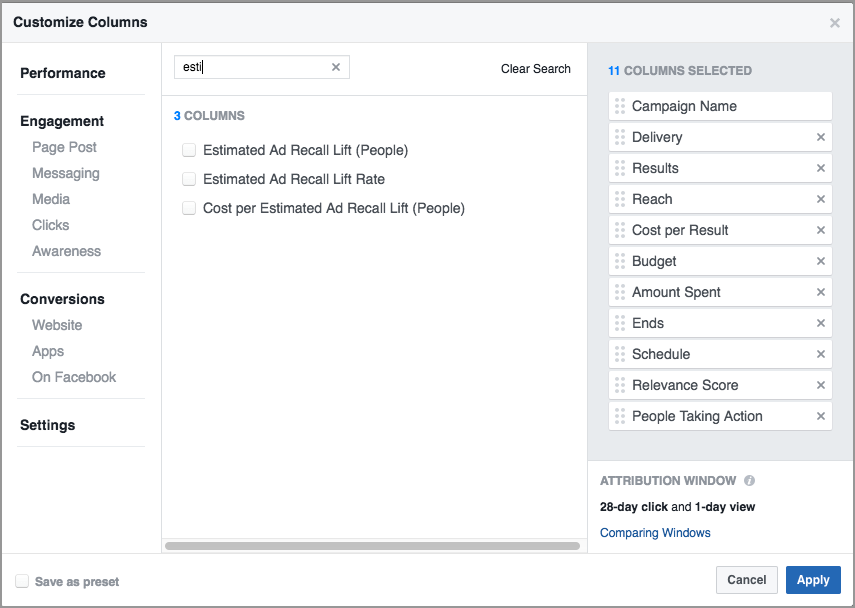 Facebook calls these ad recall numbers “in development,” because the algorithm responsible for them is continuously improving its calculation and methodology.

If you’re after a more accurate measure of ad recall, you can commission a brand lift study. Brand lift studies allow you to use more in-depth tools, like polling specific to your brand, and other awareness measurements, to determine how well your ads resonate with your audience. To see if your brand is eligible, contact a Facebook representative.

On YouTube, determining ad recall is similar. With its Brand Lift product, YouTube allows its customers to go beyond basic metrics through two powerful tools to determine things like consideration, favorability, purchase intent, and awareness — all of which are closely related to recall.

First, they use surveys. By isolating two groups — one that’s been exposed to the ad and one that hasn’t — and asking them the same question about your ad, they can determine whether recall improved. Since the only difference between both groups is whether or not they saw the ad, it’s easy to determine if your ad was memorable.

Brand Lift will also measure how much interest your campaign generates in your brand by monitoring organic searches on Google.com and YouTube. Similar to surveys, they randomly pick a group that saw your ad and a control group that didn’t see your ad. Then, they compare the organic search behavior of both groups, looking at how often they search for keywords related to your brand or campaign. The difference in searches can be attributed to your campaign.

On YouTube, Brand Lift studies are only available for video campaigns — specifically in-stream and bumper ads — and to be eligible to conduct one, your campaign must:

Should you target ad recall lift?

As the buyer’s journey becomes more complex, it’s more necessary than ever to understand the metrics between impressions and click-through rate. When an audience sees an ad but doesn’t click it, what are they doing? Thinking? How are they reacting?

The answers form the basis for campaign optimization.

At performance digital marketing agency, Metric Theory, they claim that metrics like those provided by YouTube Brand Lift studies can inform creative:

At Metric Theory, we most frequently recommend measuring ad recall for advertisers that are just getting started with Brand Lift Studies as results of this study can give a good initial sense of how memorable your creative is and doesn’t require a significant amount of budget to measure.

Brand Lift Studies are a unique opportunity to measure impact of video campaigns, which can offer a lot of real business impact beyond direct conversions. Running a study successfully can prove the efficacy of your YouTube efforts or signal that it’s time to switch up your creative or targeting methods.

Putting the tool to the test, digital marketing agency, Clix, spent $7,000 on a YouTube Brand Lift study that spanned two weeks and multiple videos. Here’s what they found:

Our study results showed a 40% lift in Brand Awareness overall. We were also able to see individual lift percentages for various categories like gender, age, and device, as well as for ad impression exposure levels. One really valuable thing we were able to see was a chart of responses to our survey question from the exposed user group. Interestingly, the majority of users said they had never heard of our client’s brand or their competitors. Reasons for this could be many, but it helps us know that we need to continue testing our videos and messaging to more effectively draw users in and/or we need to adjust or further refine the audiences our campaign is targeting.

For a brand with the right budget, aiming primarily at brand awareness, determining ad recall can be highly valuable. For many others, though, justifying ad recall lift as an optimization will be difficult. While it’s great for introducing a new product or expanding into a new market, it’s highly difficult to tie to bottom funnel metrics.

While many companies have seen positive ad recall lift on Facebook — like Breitling, Tostitos, Amica Insurance, and more — the big question is:

What direct impact does ad recall lift have on your bottom line?

Sure, brand awareness campaigns can benefit from a highly memorable ad — one that commands attention. However, the goal of your ad should always be to get your visitor to a post-click landing page, where the conversion happens.

Get your visitors to where the conversion happens

At the heart of ad recall lift is an attention-grabbing ad. For a message to be memorable, it has to be seen and it has to be engaging.

To get your user to the next step of the funnel, though, that ad also has to be clicked. Eventually, it has to get users to your post-click landing page.

Do more with memorable ads. Find out how to use them to generate conversions with an Instapage demo here.