Eurosport Gets a 30% Uplift with Instapage Personalization

Have you ever watched a sports event on television in London, Paris, Amsterdam, or Berlin? If so, Eurosport is a name you might already know. As the only Pan-European sports network, Eurosport’s events are available across 54 countries and 21 languages. The broadcaster screens premium sports including football (otherwise known as soccer in the United States), cycling, tennis, motorsports, and, most recently, even the 2018 Winter Olympic Games. 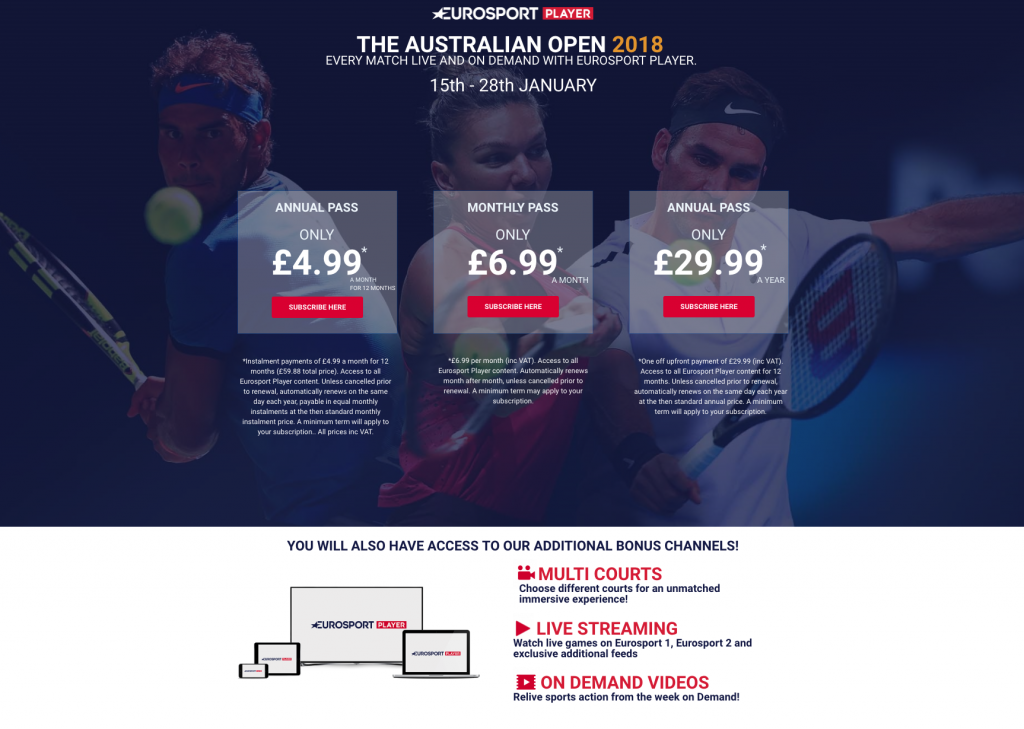 As a pan-European company, Eurosport promotes the events it has across multiple markets. A key priority for the Eurosport Player is subscriber growth, acquiring new users to watch events such as the Winter Olympic Games, the Tour de France, and the US Open. One of the most important aspects of Eurosport’s marketing campaigns is the consistency of messaging across markets to ensure a top-notch, seamless customer experience no matter which market.

Since every country and market has its nuances, Eurosport employs a number of strategies across its different markets. Flexibility to push the strongest events in certain markets is key, as time is always of the essence when you want to promote another football match coming up in two days and the matchup won’t be determined until tonight’s game.

But although Eurosport is agile as a company, its e-commerce platform was limited in its ability to customize messaging and creative. Certain updates required dedicated developer resource, which made it challenging and time-consuming to run bespoke, up-to-date campaigns. 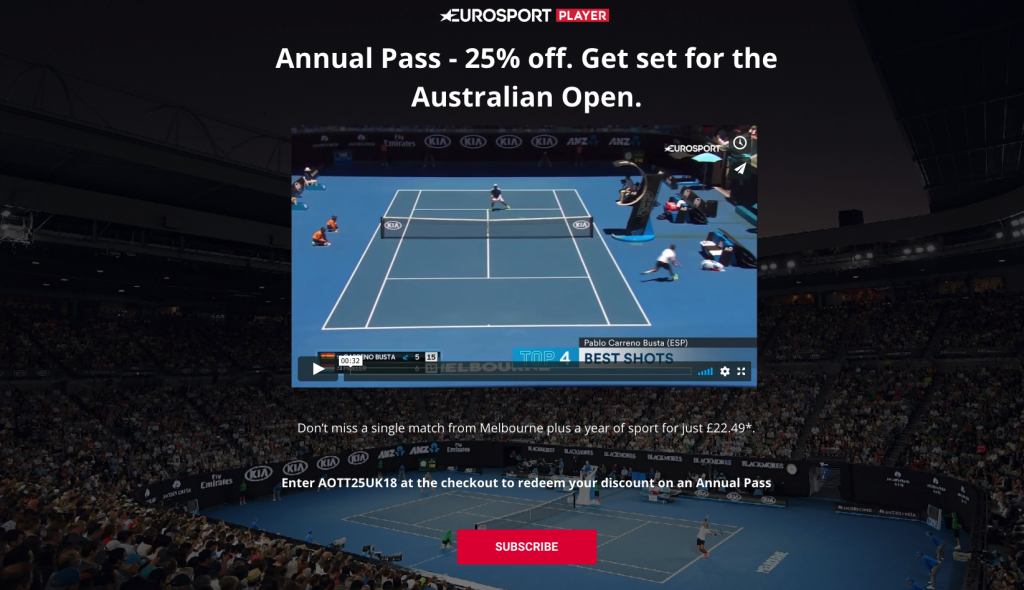 Stefano Rigoni, Digital Optimization Specialist at Eurosport, was brought on to take over the personalization and optimization of post-click landing pages for the Eurosport Player. After a thorough evaluation process, Eurosport selected Instapage as its partner in post-click optimization. Right off the bat, Rigoni was impressed with the platform’s capabilities:

“It was the first time I had worked with Instapage, but I found it to be one of the most intuitive optimization platforms I have ever used. I was impressed with the way I was able to manage the content having struggled with other platforms where I was required to do CSS or HTML. But with Instapage, except for requirements for very advanced functionality, I never had to go into the code.”

For Rigoni, the ease of use of Instapage was unmatched. He was creating up to 100 post-click landing pages a month with new content, updated pricing, and localization for Eurosport’s campaigns. Removing page creation as a barrier was a huge help:

“It only takes me 5-10 minutes to create a page with Instapage. Now, I can set it up without even looking at my screen.”

One of Rigoni’s goals was to test and optimize post-click page experiences for the Eurosport Player. This was a high-level goal that often resulted in lots of experimentation, ranging from copy to color to layouts and more. With previous tools, Rigoni found this kind of work particularly challenging:

“I always struggled with making A/B tests easy, especially when it came to testing the layout. With previous A/B testing platforms, I had to move elements around via code. Instapage makes the A/B testing process so efficient. I’ve never done A/B testing so quickly without needing to involve multiple teams like Product.”

In fact, Rigoni now runs 4-5 tests at a time on the Instapage platform. One of the initial tests, run for the 2018 Winter Olympic Games, experimented with paid social in Norway and Sweden. The test resulted in a 10% increase in conversions in Norway and 30% in Sweden.

Love for the US Open

Rigoni was able to quickly set up campaigns for huge upcoming events including La Vuelta a España for cycling and the US Open for tennis. It was the first time Rigoni had to manage two events at the same time, and it was especially challenging because there were 15 markets involved. Rigoni needed to create localized and personalized pages for each market—totalling almost 50 pages (considering all AB test variations). 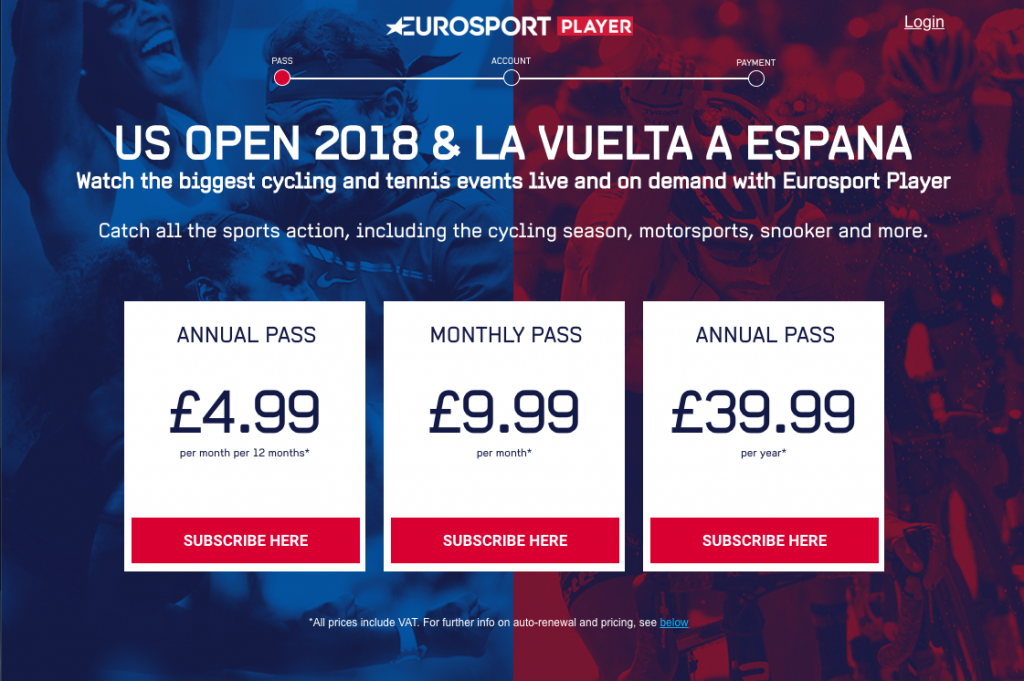 In order to get these pages out quickly, Rigoni needed to not only create and personalize all 50 pages, but also needed to get approvals from multiple teams including Creative and Legal. For this campaign, Rigoni experimented with including both events on the pages to showcase the fact that a subscription to Eurosport would include access to a number of top sports events.

From previous A/B testing successes, Rigoni also wanted to test including the rest of the season’s games and events on these post-click landing pages. Instapage made this possible as well by ensuring once pages were created they were approved and could go live almost immediately. Creating almost 50 pages, each tailored to a specific market, and getting all the necessary approvals was a daunting project, but made possible due to Instapage.

As a result, Eurosport’s post-click landing pages were able to handle millions of visitors across 15 countries excited about watching not only the top stages of Vuelta a España, but also the top tennis players in the world at the US Open.

After implementing Instapage, Rigoni has been able to uplevel the campaigns he’s rolled out:

What’s next for Rigoni? He’s looking forward to the new basketball season in Italy, and planning for the upcoming Australian Open, the first tennis Grand Slam of the year!

Instapage will be playing a starring role then too.