Campaign groups and performance targets may be one of the least known (and therefore least used) AdWords features. Google released it in September 2016, and I haven’t heard or read much about it since. That’s also why I was the only one mentioning it in a list where experts shared the most underrated AdWords features.

But it’s actually a quite useful visualization to quickly see if a group of campaigns will reach certain targets, such as a CPA or a spend target. It will even tell you how likely it is you will meet your targets.

So if someone regularly asks you questions like “How many conversions do you expect from AdWords this month?” or “Are we going to stay within our target budget?” and you don’t have a third-party tool or script telling you this, this free solution within AdWords is definitely worth using.

You’ll also sound much more scientific by saying “We have an 86% chance of meeting our target” instead of “probably”.

In the steps below, I’ll show you how to set this up and what the options entail.

The screenshots are based on the new AdWords interface. You’re probably not quite used to the new interface yet (and probably not a fan either), and neither am I. We all have to make the switch somewhere in 2018 anyway, so we might as well start to slowly and reluctantly let go of the old interface.

(Note: The author is based out of Amsterdam so the screenshots will display the Euro symbol.)

Any group of campaigns in your account that share a common theme or KPI can be grouped into a campaign group. But there are two limiting factors to consider when grouping campaigns:

Chances are, you’re already using a shared budget for a group of campaigns that share a specific spend target, so it’s really too bad you can’t use those campaigns for campaign groups.

Hopefully, Google will make this possible in the future, but in the meantime, you’ll have to choose between: 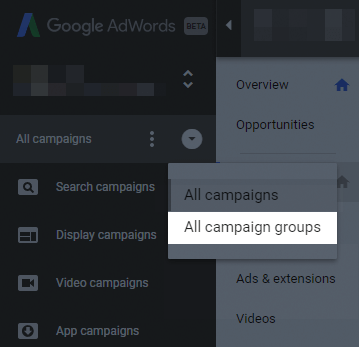 This will give you the following screen, where you’ll click the “Create Campaign Group” button:

Now it’s just a matter of naming your campaign group and selecting the campaigns you want to be part of this group: 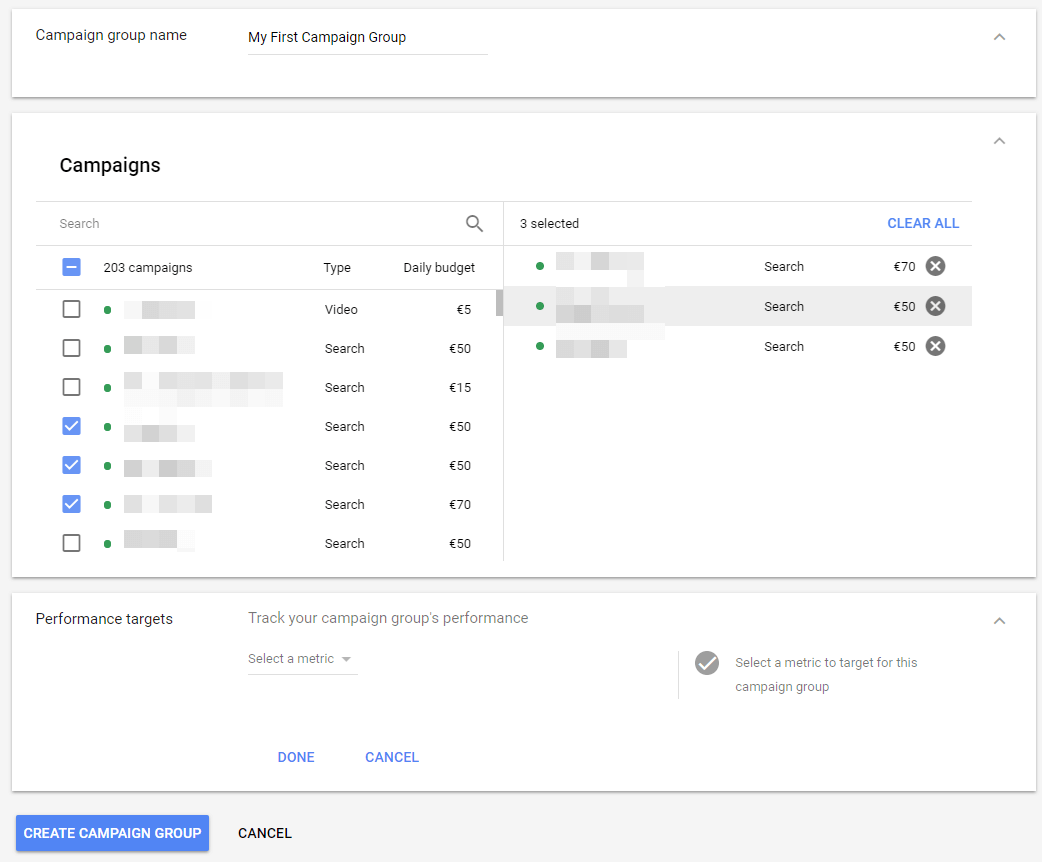 At the bottom, you’ll see the performance targets part, which brings us to step two.

For each campaign group, you can set one or multiple targets, and you’ll need to assign a date range if you want to use volume targets (spend and number of conversions or clicks).
Performance targets are divided into two categories, and each contains the following targets: 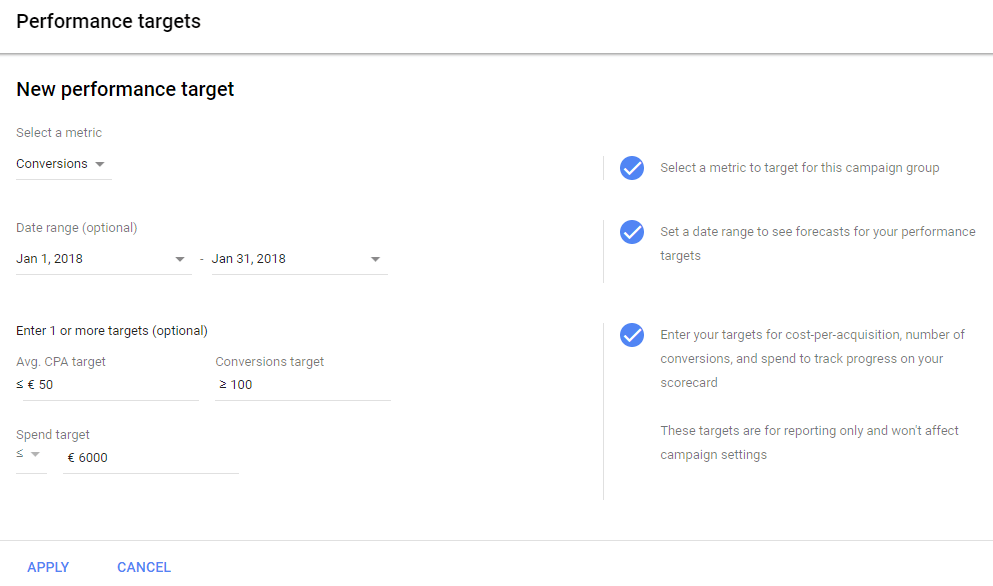 Unfortunately, there isn’t a ROAS (Conv. value / cost) and revenue (Conv. value) target option yet. So if you’re an ecommerce advertiser, you could still use the other target options and maybe convert your ROAS to a CPA by dividing your average order value by your ROAS target.

Furthermore, it’s important to know that:

However, this does defy ‘The Paid Search Uncertainty Principle’ that states you can’t control both efficiency (CPA) and volume (spend / number of conversions) at the same time. So even though you can monitor them simultaneously, when optimizing your account, one goal must be leading your optimizations.

If you can get more conversions for your target CPA, but this means you will exceed your target budget, what will you do? The answer to this question will tell you which goal is leading: volume or efficiency.

And if you use multiple targets (such as CPA and spend), just realize that one of them has to matter more than the other. As George Michie says in The Paid Search Uncertainty Principle: “The more you predetermine one, the less control you have over the other.”

Now, what about those chances of meeting your target I mentioned at the beginning? This interesting data is hidden beneath the “More details” link at the top of the page within your campaign group view:

Clicking on it gives you forecasts in terms of ‘xx% chance of meeting target’, the so-called ‘summary cards’:

And hovering over the graphs shows you estimates for each target:

Although it has a few drawbacks (incompatibility with shared budgets, ROAS, and revenue being the main ones), I’d highly recommend setting up campaign groups and performance targets for your AdWords campaigns. Consider it as one of your PPC New Year’s resolutions for 2018. It’s only a couple of minutes of work for each account and delivers very useful insights you can’t easily get anywhere else.

About the author
Wijnand Meijer is the co-founder and CEO of TrueClicks, a PPC auditing, monitoring and recommendation platform. As an agency veteran with eight years of experience at iProspect, Wijnand has managed everything from local SMB accounts to international accounts spending millions on PPC. He regularly gives talks at conferences like SMX, Hero Conf, and ADworld Experience and has been voted in The Top 25 Most Influential PPC Experts in 2015, 2016, and 2017.