About how many times do you think you reach for your phone over the course of a day?

Well, recent research shows that some people check it up to 150 times in a 24-hour span.

That’s even more outrageous when you consider we spend around 8 of those hours asleep. So to hit that 150 in just a day, you’re reaching for your phone every 7 minutes.

Now, we may not all check our phones 150 times a day — but it’s probably safe to say that a lot of us are at least mildly addicted to our mobile devices.

It’s also safe to say that one business is profiting off that addiction unlike any other:
Facebook.

If you’re an advertiser, and for some reason you still need convincing that Facebook mobile ads are worth a try, all you have to do is take a look at the amount of money businesses are pouring into the platform.

In a fourth quarter earnings report released last week, the social network boasted $5.84 billion in sales, and a record $1.56 billion in profits. Of that, $4.5 billion came from mobile devices, making up more than 80% of Facebook’s ad revenue.

As it turns out, an average of 934 million people visit Facebook daily on their mobile device – some of whom are part of the 823 million monthly active users that ONLY access the social network via mobile (that’s more than half of all Facebook users).

Now, not to worry — if you haven’t profited off Facebook’s 1.44 billion mobile users yet, it’s not too late.

To make sure you capitalize on that growth, follow these five tips to get the most out of your Facebook mobile ad campaigns.

You’d think this would go without saying, but there are way too many advertisers on Facebook, who don’t take the time to optimize their images.

There’s no excuse for this whatsoever.

Think about it. If you’re running an ad on mobile, and you know that smartphone and tablet screens are smaller than desktop monitors, you’re going to want to adjust your image accordingly.

This is how you want your ad image to look: 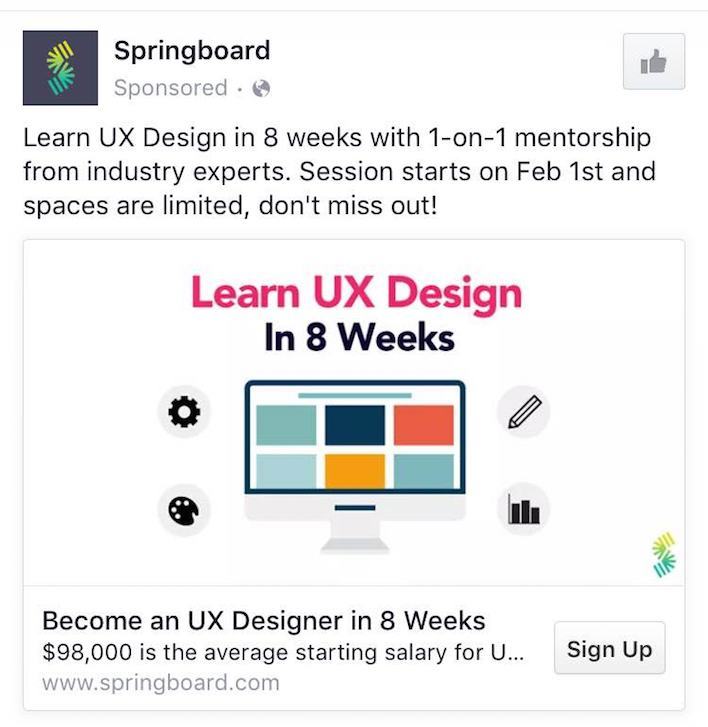 It’s eye-catching, bright and colorful, and the value proposition is stated boldly and legibly on the photo.

Here’s an example of when text overlay gets too small: 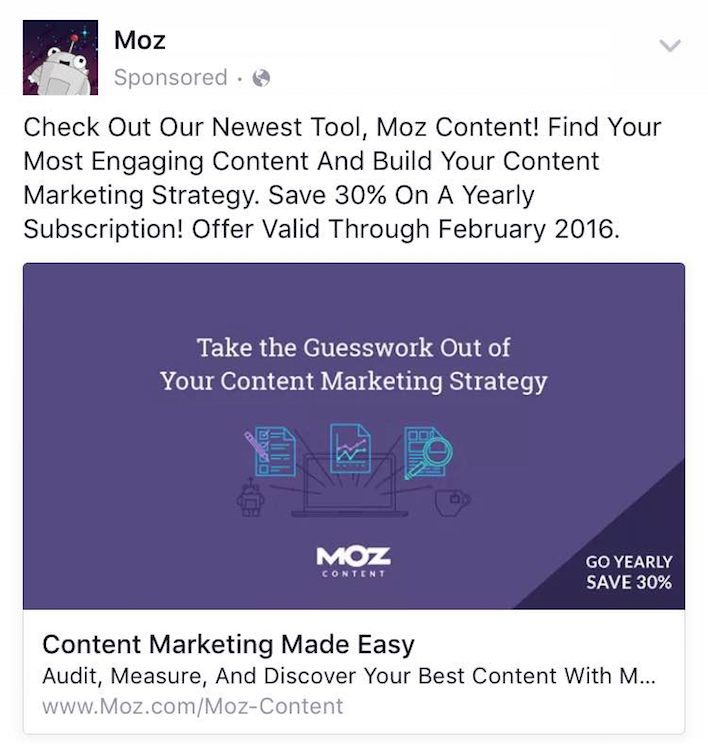 Can you read that text in the lower right-hand corner of the image?

It only includes one of the most important selling points of the ad – a 30% discount to those who opt for a yearly subscription over monthly payments.

Make sure that when you use Facebook’s 20% rule to your advantage, that you do it effectively. An entire paragraph of tiny font will take up just as much space as one call-to-action written in big block text. Here’s the difference between the two:

People aren’t going to stop to read your paragraph, but your call-to-action might just stop them from scrolling long enough to read the rest of your ad.

If you’re going to use text overlay in your ad, following Springboard’s example above, and craft a CTA that will freeze your prospect’s thumb in its tracks.

Last year, Facebook made the big announcement that brands would finally be able to advertise on Instagram, the mobile photo-based social network it had acquired in early 2012.

Since the company’s ad executives have kept quiet about revenue generated through Instagram specifically, we don’t know exactly how much it’s bringing in for Facebook these days.

What we do know, however, is that 98 of Facebook’s top 100 advertisers have leveraged Instagram ads in the last quarter; and that COO Sheryl Sandberg said ad executives are “pleased with the growth,” when asked about the photo-based app.

If her comment is any indication, it’s likely that Instagram played a role in Facebook’s massive mobile shift. And if that’s true, it means advertisers are seeing a good enough return to continue funneling money into the photo-based mobile network.

So far these brands have seen fantastic ROI, and you may as well. You won’t know until you give it a try.

Often, a headline that displays nicely on the desktop version of your ad won’t fully fit on the mobile version.

If you include a call-to-action in your ad, you’ll have around 50 characters to play with before your headline gets cut off and capped with an ellipsis.

Here’s an example of a Facebook ad that looks good in the desktop news feed: 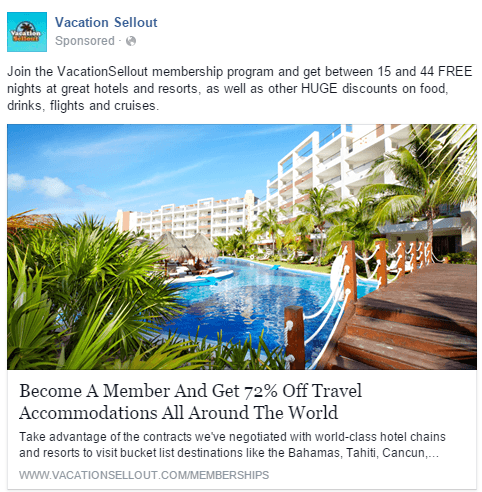 Now here’s that same ad, except this time, viewed on a mobile news feed: 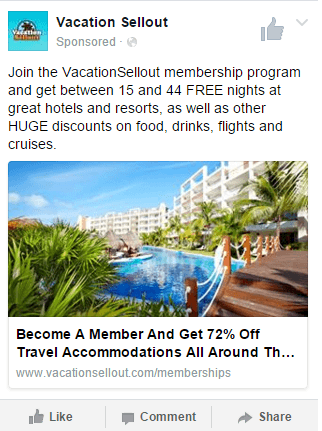 See how it’s cut off there? “All around the”… what? The world? The country? The Caribbean? 823 million users who access Facebook strictly on their mobile device will never know.

Make sure your value proposition isn’t getting cut off the mobile version of your ad by previewing it across devices before you run your campaign.

Last year, Facebook came out with the “Carousel Ad” so advertisers would have the opportunity to show off multiple images and/or links in the same ad, like this:

It gives Facebook users the option to scroll through the set of images and click the one that most appeals to them — at which point they’re taken to the corresponding page for that image.

Some brands are using the carousel format to display their product catalogue, like Neiman Marcus did in this ad for their Spring Show & Handbag Collection:

Others have treated it like a big mural, creating one continuous photo by uploading several. Here’s an example from adventure race brand Savage Race:

And some have gotten really creative, using the ad format to show people how to use their product. Check out how TYME does it this ad for their hair curler:

Wayfair, a furniture retailer, used carousel ads to boost their click-through rates by 88% and lower their cost per acquisition by 20%.

Dating app LOVOO saw a 72% higher click-through rate and a 35% lower cost per install after switching from single-image ads to the multiple-image format.

And when Tap4Fun tried the new ad format, they saw all of these impressive results.

If you think carousel ads aren’t for you, you’re not using your imagination. For some inspiration, check out this page of creative examples of the ad format in action.

5. Separate your Facebook mobile ad campaigns from your desktop campaigns

Before you run your ad campaign, on the ad set level Facebook allows you to choose where you want your advertisement to run: 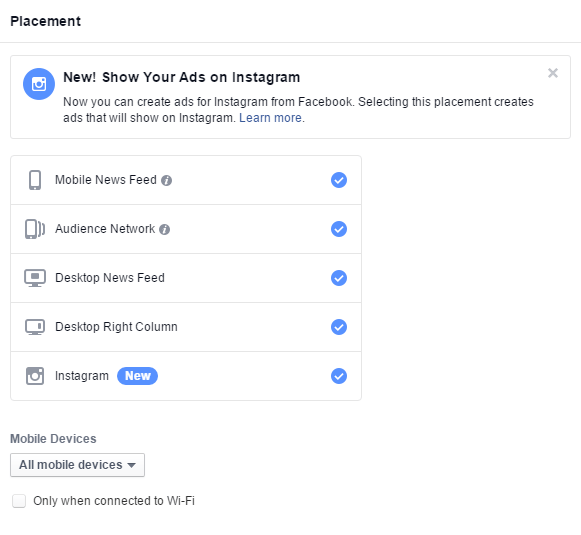 You have the option to target people in five different places. If you choose all five, your ad will run, at the very least, briefly in all five locations.

Now, what happens after those ads have been running for a while? Facebook gathers data about them — which you can see when you run reports for your campaigns in your Ads Manager.

Slowly but surely Facebook makes sense of the data and optimizes your ad set for you. This means if your ad is performing better on mobile than desktop, your budget will automatically go to mobile (and vice versa).

Now, you might be thinking, “That’s great! I can set it and forget it!”

You’re right to think it’s a great feature — but it certainly has its downfalls.

Creating separate ad sets for different audiences on different devices is the better way to go. That way you can test on your terms, interpret the data, and optimize as needed.

Not long ago, Facebook announced the release of “Local Awareness” ads, aimed at helping small businesses reach people nearby.

All advertisers need to do is submit their address and punch in the demographics of the people they want to reach, and voilà! Their ad is served to those people within the distance they specified.

Perhaps the most exciting feature of this ad format is the “Call Now” button:

Similar to the click-to-call Google Ads extension, the Facebook “Call Now” button allows users to contact your business with the simple tap of a button, straight from their news feed.

The feature is fairly new, so only time will tell how effective it’ll be. For now, the only way to determine is by experimenting yourself. So give it a try. What do you have to lose?

It’s time to capitalize on the mobile revolution

Facebook is expected to capture more than 30% of total display ad spending in the US this year — and for good reason.

Are you ready to capitalize on the mobile revolution? Our post-click landing pages are.