Learn a productive new promotional tactic today, and chances are it’ll be obsolete by tomorrow.

In the fast-paced world of digital marketing, the “how” changes just as quickly as the who, what, where, why, and when. The businesses that don’t evolve with it get left behind.

In the fast-paced world of #digitalmarketing, the businesses that don’t evolve get left behind.

Here are 9 promotional strategies that were big yesterday, but likely aren’t delivering solid ROI for your marketing team today.

The truth is, they’re all wrong. Unfortunately, despite our desire for a black-and-white answer, the best time to post remains the same it’s always been. So when is that?

We know it sounds like a cop-out, but the truth is, following a set schedule created by a different business likely isn’t relevant to you. What you need to do is use analytics to figure out who your audience is and when you get the interactions you’re looking for. Then, base your content calendar on the results depending on what you’re trying to accomplish.

Personalization is powerful in marketing. As many as 86% of consumers say it impacts their purchasing decisions. So it’s no surprise businesses are making it a priority: 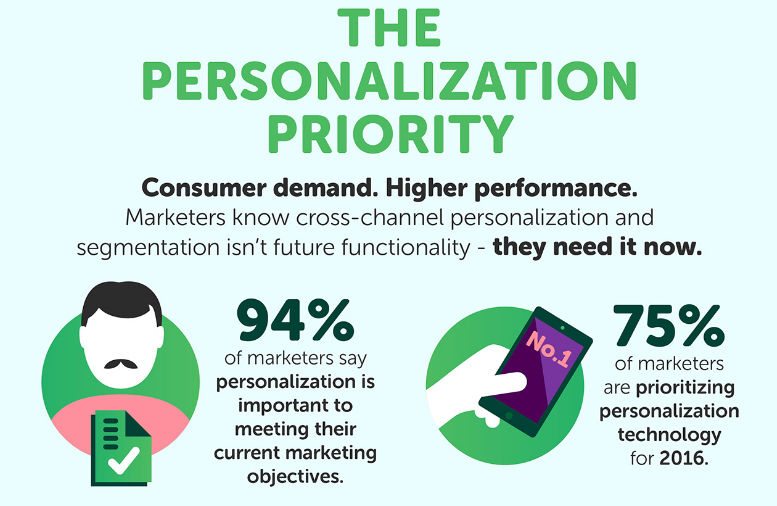 But for it to generate positive ROI, it has to be done the correctly — and research shows that only 10% of top-tier retailers say they’re getting it right.

Too many businesses believe that personalization ends at names in email subject lines and suggestions based on purchase history. According to research, today’s consumers expect more:

“What we receive is not smart personalization. They aren’t personalizing the things that matter to me.”

“What they consider personalization is so old-fashioned.”

“With today’s technology, I expect the experiences and emails to reflect my interests and preferences.”

Think beyond names and product recommendations. Use customer relationship management software to sort your prospects and customers into segments that allow you to offer them content that meets their needs. Use marketing tags to track their behavior and tailor your offers specifically to them. Where are they in the buyer’s journey? What do you need to communicate to them to move them further down your marketing funnel?

The same goes for non-customer interactions.

If you’re networking with industry peers on Twitter, don’t send cookie-cutter automated direct messages after they follow your account. As Jennifer Kane points out in a blog post, even the social network itself admits it’s annoying:

Including an automated “thanks for following” message to your new followers might be annoying to some users. We do not recommend, but generally do not regulate, this behavior; if you receive a DM you don’t like, you can unfollow that user, and they will no longer be able to send you messages.


Don’t send them messages created from templates to ask for guest blogging opportunities. Emails like this one sent to Google’s Matt Cutts is the reason he pronounced guest blogging dead (more on that in a minute): 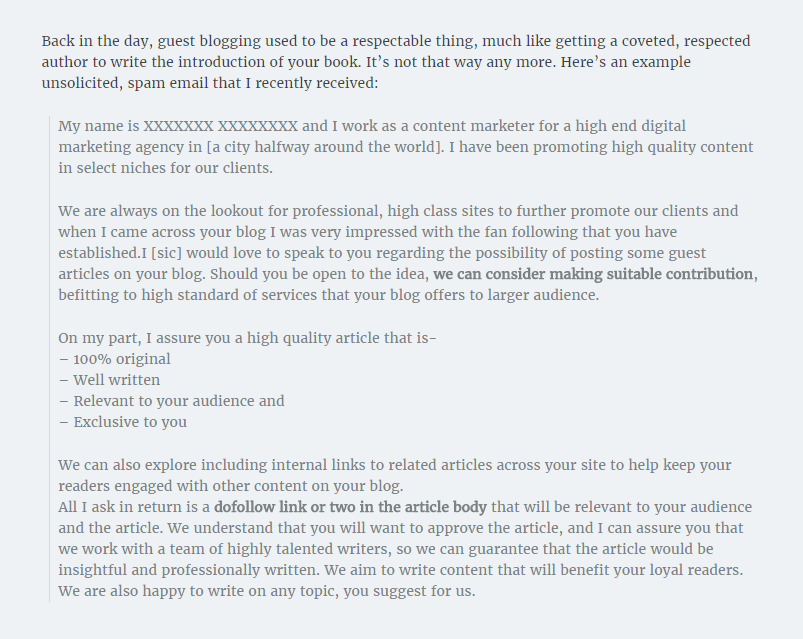 Send them content that’s personalized to them. Otherwise, you don’t stand a chance at getting their attention.

3. Relying on clickbait to produce shares

You won’t believe the shockingly harmful effects that this commonly-used promotional technique can have on your business’s reputation.

Content hidden behind clever teasers like that one has, in the past, worked to get readers to take action — and not just online.

Radio DJ’s and TV news anchors use teasers to keep us tuned in during commercial breaks, and journalists have used them to get us to read entire long-form stories in newspapers.

In the digital age, publishers like Upworthy and ViralNova have capitalized on the emotional draw of the online version of written teasers, known as “clickbait,” to get us to click through to articles.

These sensationalized headlines were effective for a long time, but not so much today (Facebook has even created a filter to restrict the use of clickbait). The reason for clickbait’s diminishing power to get people to take action is that, for the most part, the content hidden behind it fails to deliver on the promise made by the teaser.

The average web user has been duped so many times that they’ve grown immune to the effects of overly-hyped teasers like these.

Keep in mind; there’s nothing wrong with injecting a little teaser into your headlines and social media posts. In fact, the “curiosity gap,” as it’s known, is really effective at compelling people to click.

What is wrong, though, is using the sensationalized language seen in these examples when you know your content can’t live up to the hype:

She Found This Cardboard Box, But When She Rips It Open, I’m Speechless
This Is Not A Joke. You May Be Laughing, But You Shouldn’t. It’s Quite Horrifying

Or the best one yet: 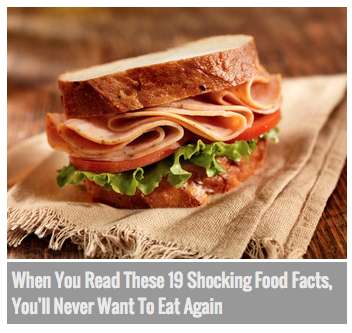 We’ll never want to eat again? Right. Headlines like these are best left for shady popups and banner ads.

Instead of trying to trick your viewers into clicking, focus on providing a reason for them to click. Make your headline benefit-oriented, and don’t over-hype that benefit. An honest teaser will leave readers satisfied at the conclusion of your content, while clickbait will cost you credibility.

4. Slaving away for search engines

The more Google’s algorithm likes your content, the more organic searchers it’ll attract. All search engine optimizers can agree on that.

What they can’t agree on, though, is how to best prepare content to be found. And because Google keeps their ranking factors close to the vest, the debate is neverending.

When gaining visibility was centered around keywords, legitimate SEO’s argued over how many to use per page (keyword density), while unethical ones crammed as many keywords as they could into their content (keyword stuffing).

When attracting searchers was about getting more backlinks, the good guys discussed how to pitch journalists, while the immoral ones built networks of pages called “content farms” that linked to each other to boost rankings.

Regardless of which camp you’re in, both ways of thinking are outdated. Instead of looking for the next silver bullet to increase rankings, or arguing over which words go where, focus on just one thing:

With each update — Panda, Penguin, Hummingbird, and the various others in between — Google’s moving toward creating an algorithm that can deliver content that’s most relevant to searchers. Their goal is to provide the best user experience possible. So it makes sense that to get your content in front of more searchers, you should do the same.

Give your fans and followers what they want. Provide valuable, educational, entertaining content and you’ll never have to worry about penalties from Google updates again.

If you’re surfing around Twitter from account-to-account, following as many as you can, we’ve got bad news: you won’t get the return you’re expecting.

Today, people crave more meaningful interactions. They won’t follow you simply because you follow them. It’s not enough. Not even if you have thousands of followers, or if you’re a respected member of your industry. And that’s why the next promotional tactic won’t work either…

In the earlier days of social media, “likes,” favorites, and +1’s all passed for engagement. Today, there’s a reason networks like Facebook value shares and comments over “likes” — because “likes” are the laziest form of interaction.

If you think that by “liking” influencers’ content you’re going to get their attention and initiate valuable conversation, it won’t happen. The chances you spark a valuable relationship with a “like” or a favorite is rare — but with an insightful comment or question? Much more likely.

“Okay, I’m calling it: if you’re using guest blogging as a way to gain links in 2014, you should probably stop. Why? Because over time, it’s become a more and more spammy practice, and if you’re doing a lot of guest blogging, then you’re hanging out with really bad company.”

Two years ago, in less than 1,000 words, Google’s Matt Cutts pronounced the death of a formerly-popular promotional strategy, guest blogging…

It seems like most people are getting the spirit of what I was trying to say, but I’ll add a bit more context. I’m not trying to throw the baby out with the bath water. There are still many good reasons to do some guest blogging (exposure, branding, increased reach, community, etc.). Those reasons existed way before Google, and they’ll continue into the future. And there are absolutely some fantastic, high-quality guest bloggers out there. I changed the title of this post to make it more clear that I’m talking about guest blogging for search engine optimization (SEO) purposes.

So, guest blogging isn’t dead, but guest blogging to boost SEO is. If you’re sending countless emails out to publishers (like the one pictured in number 2) hoping they’ll trade you a backlink for a worthless 300-word article that you’ve already posted elsewhere, you’re out of luck.

Instead (as always) focus on providing valuable, educational information relevant to the audience of the publisher you’re reaching out to. As Matt says, you can still boost awareness, branding, and gain extended reach for your business.

The more platforms you publish your content on, the more people get to see it, right? Sure. But, are they the right people?

Nearly half of Tumblr’s users are between the ages of 16 and 24 and have a strong interest in self-expression. But compared to Facebook users, they earn much less. Of all internet users who make more than $75,000 a year, 75% are on Facebook, and only 8% are on Tumblr.

On Instagram, almost 70% of users are women. Google+ is exactly the opposite – 70% of the network is male.

LinkedIn is rated the best network for B2B marketers, and Pinterest is accessed mostly on tablets.

What are we trying to say here?

More isn’t always better. Instead of pushing your content to every corner of the web, find the places it’ll be best received based on where your audience hangs out. Quality trumps quantity every time.

In the early days of internet marketing, things were much simpler. There were two major social media platforms, a few rules for optimizing your content for search, and blogging was just becoming a thing. Back then, it was easy to promote every piece of content manually.

Today, it would be nearly impossible to publish every Facebook post at the time your fans are online, or to send out emails to different subscriber segments throughout the day. Even if it is doable for your business, it’s not recommended.

Because focusing on tedious tasks like clicking “tweet” or “send” several times a day will keep your team from more important assignments. Luckily now there are endless tools to help you schedule posts to be published and emails to get sent, among countless other tasks.

We’re not saying you should automate everything. It’s still important you interact with your customers authentically, but your time is better spent doing things other than manually sorting prospects into email segments, or pressing the “send” button every hour, this also includes your post-click pages. Start creating personalized post-click pages, request an Instapage Enterprise demo today.