“Buyers make most decisions by relying on their two-second first impressions based on stored memories, images, and feelings.”

Malcolm Gladwell stated the above in his book Blink, which explores how we subconsciously make decisions within the blink of an eye. Understanding how quickly humans make decisions has enormous implications in marketing.

“Buyers make most decisions by relying on their two-second first impressions. – Malcolm Gladwell”

Consumers first interaction with your brand — whether direct or indirect — can influence their opinion for years to come. So making a positive first impression is crucial, but your work doesn’t stop there.

With so many outlets (Yelp, Twitter, Facebook, G2 Crowd, etc.) making it easy for customers to voice their frustrations or praise their interactions with your brand, it’s important to nurture existing relationships too. One person’s experience with your brand can become someone else’s first impression, thanks to online reviews and word-of-mouth advertising. Bad Yelp review anyone?

Establishing a positive brand image requires being receptive to customer feedback with a strategy in place to address negative reactions.

Yet 2017 has been full of PR nightmares with tone-deaf responses from companies, leaving consumers disillusioned and angry. Let’s take a look at one of this year’s biggest blunders, what they could have done better, and most importantly, how your brand can avoid making the same mistakes when responding to an unforeseen dilemma.

The dream was to offer festival goers, “…two unforgettable weekends of mystery and music…for those with uncompromising taste and a burning desire for adventure.” The setting: a “surreal island backdrop of the Exumas where ordinary rules don’t apply” with “the best in music, cuisine, innovation and hospitality.”

Organizers were able to deliver on one of their stated goals: attendees were treated to an adventure.

The Fyre Festival promoted itself as “an experience that exceeds all expectations.” With tickets going for $1,200 to over $100,000 with extras, the Fyre Festival was marketed as a festival for the ultra-wealthy and wannabe famous, where they could party on yachts, sample gourmet food, slumber in luxurious accommodations, and enjoy incredible music performed in an intimate, tropical setting.

Promotional videos and social media posts for the event featured bikinied social media darlings arm-in-slender-arm under palm frond cabanas wearing the latest in exorbitantly priced swimwear. The intention of these posts was to create an air of exclusivity and grandeur.

By promoting their event in a way that promised the kind of opulence only celebrities can afford, Fyre Festival organizers attempted to tap into people’s desire to live like the rich and famous: 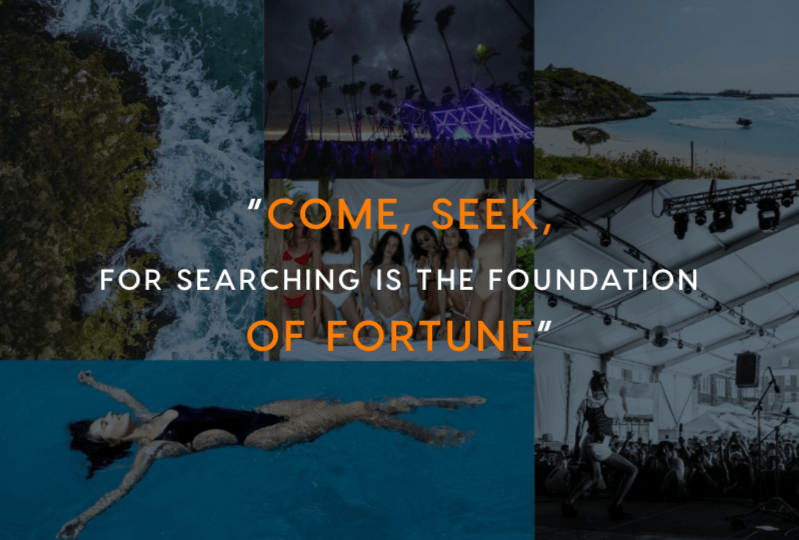 Successful marketers know that the best way to win over their target audience is by understanding their desires, pain points, and using emotional triggers. Whether your audience wants to live a life of luxury or wants a product that makes their job easier, highlight the benefits that speak to their desires.

According to one person who was pitched this fantasy, the Fyre Festival organizers managed to get over 400 social media influencers, or as they called them “Fyre Starters,” with millions of followers, to promote their event.

“Fyre Starters” included Kendall Jenner (not a good year for her so far), Bella Hadid, Alessandra Ambrosio and many more Instafamous models and celebs: 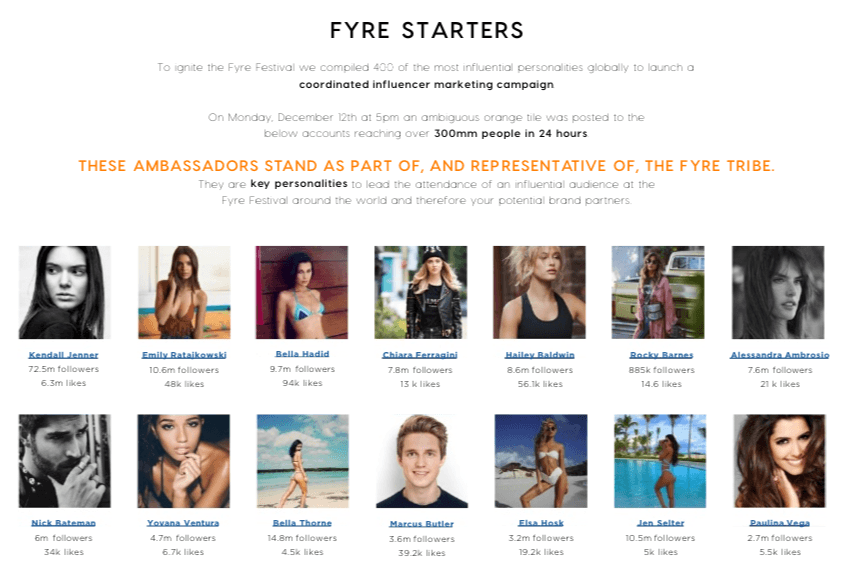 Within the first 48-hours of their social media campaign, the “Fyre Starters” promotion reached a notable 300 million impressions. On the surface this is impressive, until you find out that organizers paid Kendall Jenner $250K for one Instagram post and spent a majority of their budget on celebrity endorsements, while neglecting to budget for the not-so-little things like infrastructure, staff, and the performers.

Don’t believe everything you see on social media

The reality was far from what was advertised. The Fyre Festival was a colossal disappointment for its ticket-holders and a public relations nightmare for the organizers.

Attendees expected to be ushered into a tropical paradise and live like celebrities for the weekend, but instead, they were met with disaster. Concert-goers found themselves without adequate food, water, shelter, and access to basic medical care.

The “luxury cabanas,” described by one attendee as “emergency-relief tents,” had dirty, wet sheets on the so-called beds — if they even contained beds; the “gourmet food” was just cheese sandwiches in styrofoam boxes, and there was insufficient access to electricity.

As night fell, with no security or organizers to be seen, a general panic began to set in, and people’s stuff was getting stolen.

On top of it all, no one was able to get in touch with the Fyre Festival organizers for help or clarity on what was going on, besides the vague statement they issued that the event had been canceled.

How did the public react?

A swift and brutal backlash

Festival attendees faced unexpected and horrid conditions and were furious, especially because they had paid thousands of dollars for the event. Twitter lit up with disbelief and anger: 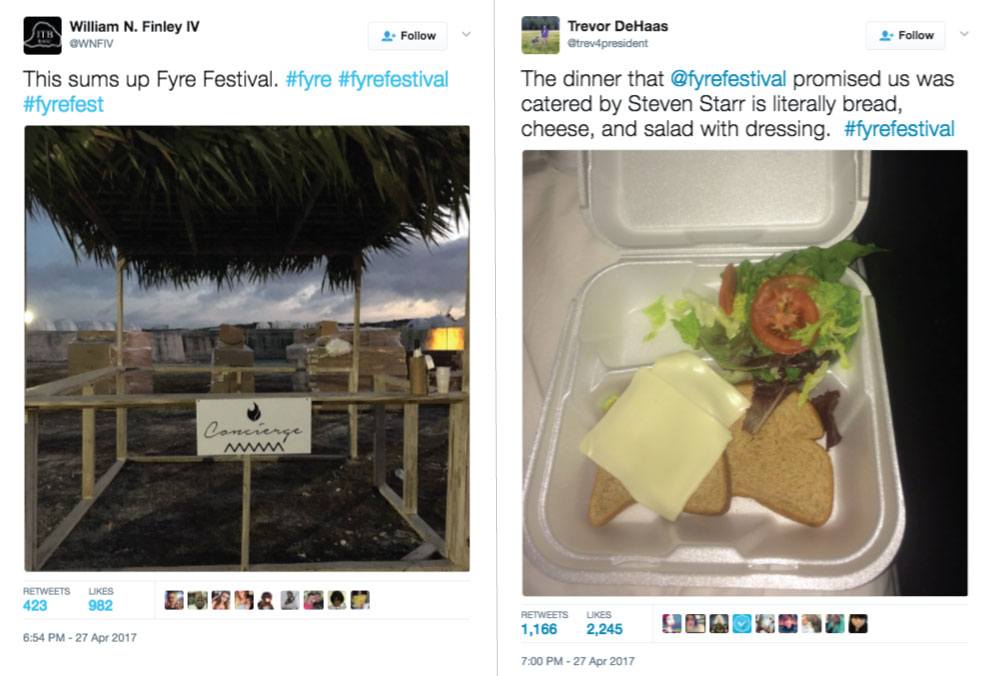 Organizers knew months ahead of time that they would not be able to provide anything close to what they were promoting, yet they kept selling tickets. Unsurprisingly, five lawsuits have already been filed by festival goers against the organizers for damages in excess of $100 million.

With headlines like Guests who spent thousands for a luxury music festival in the Bahamas found a squalid tent city or Fyre Festival Hit With Two More Lawsuits, One Alleging “Bloodstained Mattresses” it’s hard to imagine anyone coming to the 2018 Fyre Festival.

What marketers can learn from Fyre Festival’s mistakes

Ja Rule, rapper and co-founder of Fyre Festival, issued an “apology” on Twitter but while he said he’s working hard to make sure everyone’s refunded — he made sure to emphasize the failed festival was “NOT MY FAULT.”

We started this website and launched this festival marketing campaign. Our festival became a real thing and took [on] a life of its own. Our next step was to book the talent and actually make the music festival. We went out excited, and that's when a lot of reality and roadblocks hit…We were a little naïve in thinking for the first time we could do this ourselves.

It diminishes trust and consumer confidence in your brand when you avoid taking responsibility for something that’s blatantly your fault. As in life, brands should take responsibility for their actions, apologize when at fault, and do their best to atone for their mistakes.

As Billy McFarland admits, they started heavily promoting the event before they even started organizing the festival. Never knowingly mislead your prospects or customers — you might make money in the short term, but it will be the end of your business in the long run.

When a brand is in the wrong, they should issue a heartfelt and genuine apology right away. An apology without acknowledging responsibility is not the right tactic. Sorry Ja Rule, you’re statement wasn’t strong enough.

Don’t be insincere. Address the issue without trying to gloss over what really happened — like
United’s CEO did in his first public apology after the now infamous overbooking incident.

Dr. Dao, a paying passenger, refused to deplane when told he was being bumped from the flight because United had overbooked and was then violently and forcibly removed by police. Many found it downright insulting that United’s CEO apologized by saying he was sorry for “having to re-accommodate these customers.”

If you don’t apologize and take responsibility right away, it comes across as half-hearted and disingenuous. Customers view it as a lame attempt to win back the business your company lost after the public backlash.

Be honest and keep communication open

If something goes awry, but you don’t know the cause of the issue, acknowledge there’s a problem and let people know you’re investigating. Don’t pretend you know why it occurred.

Richard Branson handled Virgin Galactic’s nightmare scenario, a rocket crash which killed one pilot and injured another, as well as any leader could. He visited the site immediately, addressed the tragedy, and when asked what happened, he tactfully and honestly answered:

Now is not the time for speculation. Now is the time to focus on all those affected by this tragic accident and to work with the experts at the NTSB, to get to the bottom of what happened on that tragic day, and to learn from it so that we can move forward safely with this important mission.

Branson didn’t pretend to know why the accident happened, which could have led him to backtrack later, eroding his credibility.

What can you do to prepare?

At your company, if there’s a product defect or glitch in your program, have a plan in place. Create a communications response framework, where you decide who will be authorized to reply to incoming requests from customers, or reporters, and how you’ll keep the company updated so everyone’s on the same page.

What marketing lessons can you learn from #FyreFestival, @United, and @VirginAmerica?

When an actual event occurs, alert all the necessary people within your organization. Then establish the facts. Questions you will want to ask are:

Once you’ve collected as much information as you can, decide if you need to alert customers, stakeholders, and maybe even reporters.

If it’s serious enough to warrant an alert, address the issue with a series of informative and conciliatory emails or a public statement. Keep customers informed about what you’re doing to figure out the issue, the steps you’re taking to fix it, and either an estimated time for when you’ll have it fixed or when you’ll be in contact again with an update.

Be prepared for the worst

Don’t tarnish your brand’s image because you weren’t prepared for a worst-case scenario. Unless you work at a huge corporation, you probably won’t have a full-fledged crisis communications team in place, but you should still establish best practices or guidelines to follow.

If a disaster does hit, an easy way to keep all relevant parties updated is through a dedicated post-click landing page. Having one place with all relevant facts, that can be easily updated, streamlines the communications process.

Get a head start on your crisis response plan, sign up for an Instapage Enterprise demo today.