If you’re an advertiser or a publisher on Facebook, recent news might have you seeing visions of ROI.

Updates to two of the platform’s newest publishing tools, Facebook Live and Facebook Instant Articles, have the potential to be an all-around win for publishers, advertisers, users, and even the social network itself.

It’s no secret that Facebook has been making a push toward video over the last few years as audiences continue to consume record amounts of digital video content, including on the social network. Statistics show that:

And so, in January of last year, Facebook finally rolled out its Live offering to users all over the world after introducing it in August — allowing them to stream events in real-time from their mobile phones with ease. Since then, we’ve seen political rallies, latté art, and even sunbathing pancakes broadcast live on the social network — much to the enjoyment of its users. Research shows that live videos are watched 3x longer and receive 10x more comments than non-live ones.

We’ve also seen the number of people using it at any given minute quadruple since May. And now that it’s attracting more DIY broadcasters and more viewers with its premium placement at the top of Facebook news feeds, the social network has hopes of monetizing the feature with advertising. But, not in the way most video advertisers on the web do.

Largely, pre-roll ads have been how major players in the video space, like YouTube, have monetized videos up until now. But studies have shown that 94% of people skip those pre-roll ads after their required 5 seconds of view time. And, according to Facebook’s CEO Mark Zuckerberg, those ads don’t align with Facebook’s business model:

“The important thing to keep in mind on this is we don’t need to do pre-roll because our model is not one where you come to Facebook to watch one piece of content, you come to look at a feed,” he said on a conference call with investors in late July.

Instead, it’s ads in the middle of streams that users will see when they’re watching live, but not until the first five minutes of the video have passed.

Now, we know what you’re thinking – interrupting a user mid-stream sounds potentially more annoying than serving them ads before it. But, the format is something that Gareth Capon, CEO of digital marketing service Grabyo, thinks fans won’t have a hard time getting used to. He told Digiday:

“Where there are natural breaks in a live event, then there’s opportunity for advertising. Viewers are already used to that type of advertising, whether it’s at the end of the quarter of an NFL game, halftime at the Super Bowl, or during downtime on the red carpet at the Oscars, maybe that works.”

Already, some say Facebook has been more collaborative with publishers when it comes to the monetization of Live compared to other offerings like Instant Articles, which started with restrictions that are still progressively loosening. Opportunities for branded partnerships are greater with Live, and Facebook has invested heavily in them from the start.

This past summer, the social network entered into 140 contracts worth $50 million for live content from big-name celebrities and publishers like Gordon Ramsay, Michael Phelps, Mashable, and Buzzfeed.

Julian Childs, Managing Director of Business Insider UK, says that it’s not only Facebook’s collaboration with publishers that makes Live appealing to brands, but also its ease-of-use and potential reach:

“Overall, the potential is there to work with brands around certain topics. With practically zero technology barrier we can publish live and have tens to hundreds of thousands of viewers watching, commenting and sharing the content straight away.”

Additionally, the potential to capture the attention of Facebook users when they’re most engaged – during significant cultural events – is also there. For example, Live played a big part in this year’s presidential election.

But there are some barriers to the monetization of Live. For starters, Facebook can’t guarantee advertisers a minimum number of impressions. Without the promise of eyeballs, brands may be hesitant to invest heavily in video ads on Facebook Live. Realizing that, the social network has encouraged broadcasters to promote their live streams beforehand to maximize viewership, and recently added features like scheduled streams and subscriber notifications that remind users when a stream is about to go live: 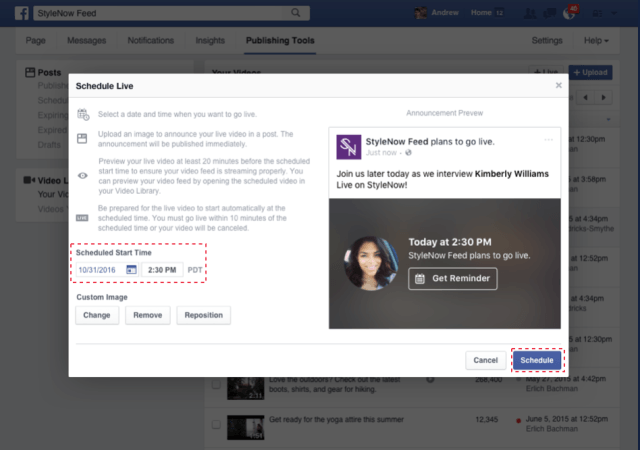 The actual content of live streams is also an issue. In July, Diamond Reynolds used Facebook Live to broadcast the death of her fiancé. More recently, a Tulsa man used the service to record himself stealing a police car and fleeing the authorities.

Even though Facebook has given publishers the ability to opt out of serving in-stream ads during sensitive videos, or altogether, the potential for controversy makes selling programmatic ad space tough. No business wants to risk associating its brand with questionable content.

Still, in-stream advertising during live broadcasts on Facebook has the potential to be a big moneymaker, both for the social network and its partners. But will it?

Currently the ads are being tested with a select group of publishers, and so far, it looks like the answer is “not yet.”

“We haven’t seen any money yet,” one publisher involved in the trial told AdvertisingAge. “We’re basically doing them a favor.”

But, the ad type is young, and Facebook doesn’t even know that it’ll be developed into a full-fledged product. So, we’ll all just have to wait and see.

Facebook rolled out Instant Articles last year in an attempt to fix what they saw was the slowest part of their news feed experience on mobile. Initially, brands’ reactions were mixed. Instant improved reader experience greatly, but strict advertising guidelines made it difficult for publishers and advertisers to monetize them.

Progressively, those restrictions have loosened, however — even more so recently, when Facebook announced that it would be making some changes to ad formats within articles.

“Creating value for publishers using Instant Articles is extremely important to us, and it is critical to our mission of delivering the best mobile reading experience for people on Facebook,” said Instant Article Product Manager, Harshit Agarwal, last month. “Publishers tell us they measure value from Instant Articles in terms of traffic growth and per-page monetization, so we have focused our investments in this product along those two dimensions.”

Those changes come for publishers and advertisers selling ad space directly within their instant articles, or through Facebook’s Audience Network, which includes placements in apps like Spotify and Shazaam, and may soon include ones on set-top boxes like Apple TV and Roku.

For publishers with direct sold advertising business, Instant Articles now support larger and flexible ad units up to an aspect ratio of 2:3. The new format will allow publishers to bring more of their campaigns to Instant Articles by offering advertisers more options that include custom and premium content.

Publishers who monetize via Facebook’s Audience Network, on the other hand, now have the ability to offer readers a more engaging advertising experience with video and carousel ad formats across iOS and Android:

“Those are two of our best-performing ad units on the audience network,” says Dan Rose, Facebook’s Vice President of Partnerships.

Brands like The Laughing Cow would agree. Recently, through video advertising via the Audience Network, they connected with 14 million parents and millennials leading up to the start of the school year with the goal of boosting product awareness. The result was a 5-point increase in purchase intent and an 18-point increase in ad recall.

In articles connected to the Audience Network, like the ones published via Instant, video ads will look like this (click through on the image to view the video): 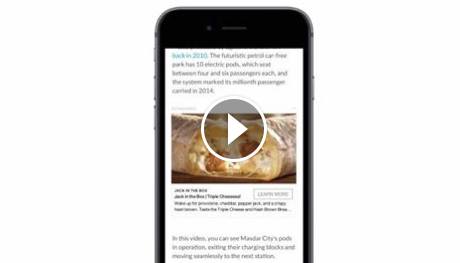 By serving ads via the Audience Network, Facebook claims advertisers can boost reach by 10%. Publishers in this case only keep 70% of the revenue though, while Facebook takes a 30% cut.

Keep in mind, advertisers can also choose to buy ad space from publishers directly, in which case those hosting the ads keep 100% of the profit. Direct sold ad deals like these are likely to increase now that the update accommodates bigger and premium ad types.

Vox Media, which has seen major success with its proprietary unit called “Athena,” is excited about the change. Joe Alicata, Vice President of Revenue Product and Operations at Vox, had this to say about it:

“Over the past four years, Vox Media successfully developed the most effective creative ad formats, technology and ad-tech platform that both optimizes in real-time and captures creative insights for our partners. We worked with Facebook to incorporate these high performing ad units and capabilities in Instant Articles, to reach our valuable audiences who are watching, reading and sharing amazing content on this platform.”

On top of changing the look and placement of Instant Article ads, Facebook has also altered its policies that restricted the number of ads per article, and made improvements to its autoplacement feature. Additionally, the social network is testing CTAs within articles to help publishers more easily drive action with their content.

Brands like Men’s Health, Women’s Health, and Runner’s World are already capitalizing on the new changes. Will you?

Will you try Facebook video ads following the new update?

Together, will these updates convince you to go all-in on Instant articles? What do you think the future holds for Facebook Live’s in-stream ads?

Either way, make sure to connect your ads to a dedicated Facebook post-click landing page to drive all your advertising traffic to, and sign up for an Instapage Enterprise demo here.