How to Use Account-Based Marketing Personalization in Your Campaigns

As the eruption of marketing technology rages, more sophisticated techniques for advertisers present themselves. One of those, account-based marketing (ABM), is built on high levels of personalization that have only recently become achievable. And, according to research, those levels of personalization are helping businesses perform better than ever.

One study from Marketo shows that teams aligning sales and marketing through ABM are 67% better at closing deals than their peers. Another, from ITSMA, discovers 87% claim account-based marketing delivers higher ROI than other tactics.

So, it’s no surprise companies everywhere are adopting the strategy. In 2017, 52% of businesses allocated at least 30% of their budget to ABM. That’s a 57% increase from the year prior.

What is account-based marketing?

Account-based marketing is a strategy that aligns teams within a business to focus on markets of one, known as “accounts.” This allows these teams to maximize personalization to serve content more relevant to the account’s needs.

Think of it this way: Instead of casting a wide, impersonal net for smaller fish as most businesses do, ABM is like fishing with a pole for the bigger catch, one at a time.

The major benefits of personalization are widely known, and no other strategy capitalizes on them more than account-based marketing, which targets its efforts to one customer at a time. As Isaac Brower puts it:

The basic truth about marketing is that information rules. The more you know about the people visiting your site (and the more you can take action on what you know), the more likely you are to convert them into qualified sales leads.

When personalizing an account-based marketing strategy, planning looks somewhat similar, but execution is in reverse, according to the teams at FlipMyFunnel and Drift: 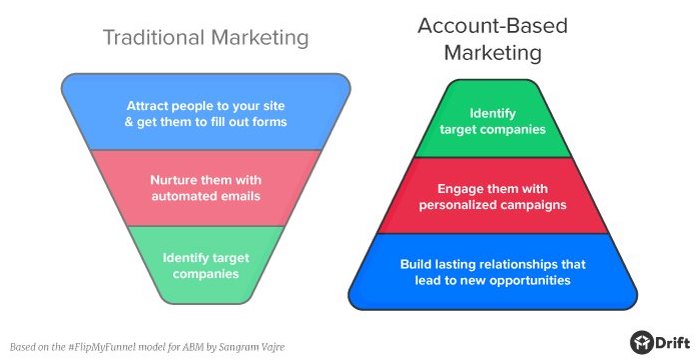 Traditionally, marketing strategies today start by driving traffic to your business’s website, generating leads, then nurturing those leads, and finally, getting those leads to buy.

Account-based marketing, however, turns everything upside down. The end goal becomes the starting point. So now, instead of starting by driving traffic, you’re first identifying the targets that you want to sell to. You start specific with accounts that are most valuable to your company.

In a WordStream blog post, Margot da Cunha does a great job of teasing out the difference in approach between account-based marketing and traditional content personalization:

Marketers are used to defining personas, but account-based marketing isn’t about distinguishing between “Chatty Cathy” and “Enterprise Eric.” Rather ABM is about marketing to a whole organization rather than an individual. This is a critical distinction and the starting point of kicking things off on the right foot.

Start your account-based marketing efforts by determining the common makeup of organizations that bring in the largest MRR (monthly recurring revenue) at your organization. For instance, define the industry, company size, location, annual revenue, upsell opportunity, profit margin, etc. for the accounts that are yielding your business the highest long-term profits. Those are the types of accounts you want to go after.

Next, you execute personalized campaigns that engage your accounts. This is where your research in stage one pays off. With an abundance of information on who your targets are, you’re in a better position to personalize campaigns specifically to them. This isn’t your average level of personalization. These campaigns are not only personal — including things like hand-written notes, tailor-made resources — but valuable for displaying your worth to the prospect.

Finally, if your efforts land you an account, you’re developing and improving the relationship so that it not only leads to lifetime value, which is the biggest driver of revenue, but also relationships that may come through referrals as a result.

When Truman Tuang was asked to run Influitive’s ABM strategy, he knew he’d have to think creatively. He was tasked with offering personalized, “amazing experiences,” he writes, but he needed to do it on a budget.

The goal would be to spark conversations with people who had downloaded Influitive’s content, or heard of them, but had never communicated with the sales team. In a blog post, he shares his process from targeting to campaign execution. Below, we touch on his major steps. For a more in-depth version, check out the original post here.

Throughout all examples of account-based marketing, you’ll find a common strategic thread: the alignment of marketing and sales. In this case, with the help of the sales team, marketing created a shortlist of companies to target which they labeled, “Tier One, ” which were the accounts most likely to buy from Influitive. They did that by sorting based on the following criteria:

From there, Tuang and his team had to determine how to reach Influitive’s targets best.

To figure out how to personalize to their targets, Influitive needed to determine how best to provide personalized value, but also do it in an affordable way. Tuang writes:

The campaigns had to be flashy enough that people would take notice, and personalized enough that they would feel special—but inexpensive enough to be doable. (No mailing Ferraris!)

I decided to focus our campaigns on the topic of online reviews. Lots of our target companies (in the tech/software space) are constantly being reviewed. However, they don’t realize they have the power to improve the number of reviews they get and their overall rankings on third-party review sites with a formal advocacy strategy.

With a personalized offer and an idea of how to provide value, Influitive built three different campaign types:

Knowing that reviews matter greatly for many of Influitive’s clients, the first campaign revolved around personalized review notes. The reviews of the prospects, found on a third-party review site, would serve as a good spark for conversation on how Influitive could help them earn more reviews.

These reviews were bundled in a package, among other offers, to be sent to the prospects. They also included a handwritten note from an Influitive sales rep, an Influitive sticker, and some even received an ebook on generating sales with brand advocates.

Sent via UPS, the packages were thought to be more enticing to open, and easier to track.

With the second campaign, Influitive targeted companies in Gartner’s “Magic Quadrant” who didn’t have many reviews. Then, they made videos, targeted to each prospect, telling them how they could get more positive reviews with advocacy marketing. On Twitter, they posted the videos and tagged each prospect.

The third campaign was certainly the most outside-the-box. Like the others, it included a positive review of the company, printed. However, in this case, it was stuffed inside of a piñata filled with candy.

At first, this may sound like an irrelevant offer. However, consider receiving a plain-old package at your office. It sits in the lobby, or on a desk and eventually it’s opened. But, a piñata? That’s noticed immediately, and opened with intrigue soon after. Then, it’s smashed to pieces, and that’s when personalization comes into play.

Inside, prospects find a printed review and a testimonial from a delighted Influitive customer who goes the extra mile by offering to speak to the prospect via email.

When the results were in, the most valuable campaigns made themselves known. According to Tuang:

Nearly as important as hard results, the Influitive team learned some things they can use in future campaigns. For example, positive reviews are better to send than negatives (negatives produced a lower response rate), and, while videos produce a high response rate, they were also the most costly to make in terms of resources.

All-in-all, the three campaigns generated several opportunities through which FlipMyFunnel’s model, depicted earlier by Drift, could result in long-term relationships and even future business.

When agency, GumGum, wanted to prove the value of its computer vision technology to T-Mobile, they chose to go a more unique route than calling up key decision-makers or sending out emails.

They did some poking around on social media to find that their key target, CEO John Legere, was a big fan of Batman. So, they assembled a team of creatives who spent months making a comic book called T-Man and Gums: 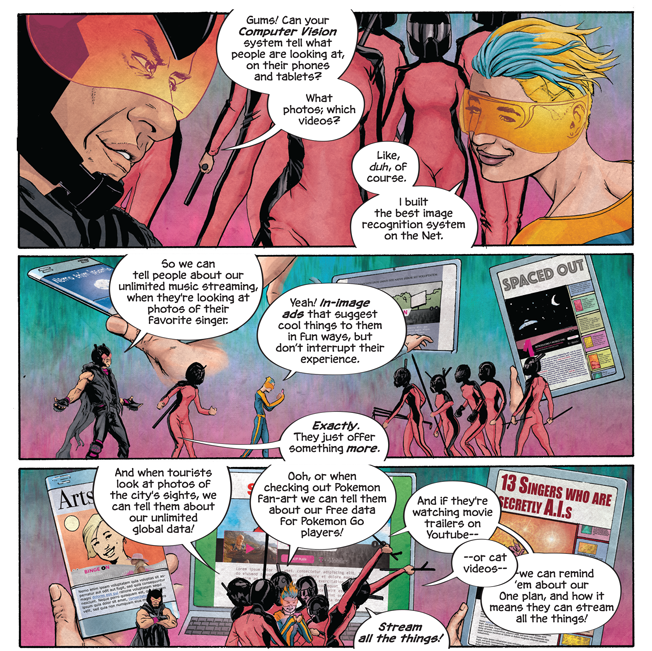 When it was finished, GumGum sent 100 copies to T-Mobile and its agencies of record. In a matter of hours, the T-Mobile’s CEO Tweeted to express his compliments to the agency. Days after, a meeting was set, and the tactic eventually led to GumGum bringing T-Mobile on as a client.

When VITA, a newly formed agency in Virginia, sought a partner that could improve the state’s IT infrastructure and provide services to its more than 90 branches, Northrop Grumman (NG) had a $2 billion opportunity. It also had a major problem.

In Virginia, NG was known mostly for constructing ships and submarines, but not for its IT expertise. So, the company’s marketing executed an ABM strategy to set the record straight.

By networking with contacts close to VITA, Northrop Grumman was better able to determine what the newly established organization was looking for in a partner: best-in-class IT expertise, a significant presence in Virginia, commitment to economic development in the most depressed areas of the state.

WIth that knowledge, the campaign used advertising, sponsorships, grassroots efforts, and media to position itself as that partner. According to the case study from ITSMA:

The campaign resulted in a win for NG in the form of a 10-year, 2-billion-dollar contract, and an initial investment of $270 million in capital.

Account-based marketing is one of the few new marketing strategies that leverages personalization to its fullest extent to optimize the customer experience. By flipping the traditional funnel upside down, it helps businesses start with customers that are a perfect fit, and work to earn them with personalized marketing. For more optimization opportunities in the marketing funnel, sign up for an Instapage Enterprise demo today.